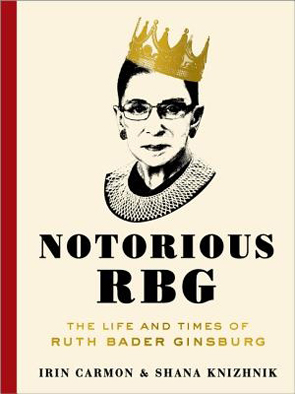 The Life and Times of Ruth Bader Ginsberg

“RBG looked the justices in the eye and quoted Sarah Grimké, the abolitionist and advocate for women’s suffrage. “She spoke not elegantly, but with unmistakable clarity,” RBG said. “She said, ‘I ask no favor for my sex. All I ask of our brethren is that they take their feet off our necks.”

Ruth Bader Ginsburg has become a pop culture phenomenon in a way that no other Justice of the US Supreme Court has ever achieved. Apart from the t-shirts, the mugs, the tattoos, the Halloween costumes and the workout video, she was also a regular character on Saturday Night Live (played by Kate McKinnon) and the basis for two 2018 movies - the biopic On the Basis of Sex and the documentary RBG. She is the subject of an opera - Scalia/Ginsburg by Derrick Wang - about her long friendship with fellow Supreme Court Justice Antonin Scalia. Her most scathing dissents have even been set to music. Notorious RGB provides a quick but comprehensive guide to how this all happened.

This book started life as a Tumblr blog created by Shana Knizhnik in 2013, following RBG’s fiery dissent in Shelby County v Holder where the Supreme Court held 5-4 unconstitutional the part of the Voting Rights Act 1965 which required Federal preclearance for any changes to voting practices. That dissent, which included the words throwing out preclearance when it has worked and is continuing to work to stop discriminatory changes is like throwing away your umbrella in a rainstorm because you are not getting wet, caught the public’s attention and octogenarian Justice Ginsburg became the poster girl for liberal idealism. It helped that she had also read two other dissents the previous day. Journalist Irin Carmon interviewed Ginsberg for MSNBC in February 2015, partnered with Knizhnik to write this book. Both did research for this book, with Carmon doing the writing while Knizhnik curated the images and factchecked.

The book covers Ginsburg's early life and family background, her college days and meeting her future husband, Martin Ginsburg, their decision to attend Harvard Law School together, their marriage and Ginsburg’s early struggles to be accepted as one of nine female students at Harvard (out of a class of five hundred). It then goes on to her early academic and law career, her growing involvement with the American Civil Liberties Union (ACLU) where she co-founded the Women’s Rights Project and reviews the cases which brought her to prominence as a lawyer in gender discrimination matters. These cases notably include Moritz v Commissioner (1972) where a man was denied a caregiver tax deduction because of his gender, and Weinberger v Wiesenfield (1975) where a widower was denied social security benefits which were available to widows who cared for minor children. While many of colleagues in the ACLU disagreed with her taking these cases in which no women’s rights had been violated, Ginsberg used them with her other cases to establish a meaningful body of law which said that neither men’s nor women’s rights should be determined or limited by sex. She also saw that care giving roles performed by men gained acceptance and equality under law, for either aging parents or young children, which was beneficial to women and society in general.

The story then follows Ginsburg’s appointment as DC Circuit Appeals Court judge by President Carter in 1980 and eventually her appointment as an Associate Justice to the US Supreme Court, following her nomination by President Clinton in 1993, the second woman to be appointed to that court. In her first years on the Supreme Court, Ginsburg was known as a centrist, and someone who worked hard to achieve consensus and collegiality with her fellow Justices. This changed as the make-up of the bench changed and became more conservative. With the retirements of Sandra Day O’Connor (the first female to be appointed to the Supreme Court) and John Paul Stevens, and their replacement with more conservative Justices such as Samuel Alito, Ginsburg became the senior member of the liberal side of the bench and became more prominent with her dissents from the majority opinion. Notably, Ginsburg started to use the phrase “I dissent”, rather than the traditional “I respectfully dissent” (first used in her dissent in Bush v Gore (2000)), showing her fury with some of the majority decisions.

Notorious RGB contains detailed descriptions and analysis of the most significant legal issues Ginsberg was involved with, but does so in a way that is simple enough to be easily understood by people who have no knowledge of the US Constitution or of other legal matters. For those who have a deeper interest in the legal matters, the audiobook version also includes a PDF which contains annotated copies of several of Ginsburg's more significant briefs, opinions and dissents, as well as details of her women’s rights cases and dissents.

But apart from the legal and women’s rights issues, this book describes a personal life fully and joyfully lived. Ginsburg not only loved the work she did as a lawyer and as a justice, she also had a rich private life where she embraced music and art and friendship. One of her greatest friends was Antonin Scalia, a fellow Supreme Court Justice. Although they were political opposites, they shared a love of opera and became lifelong friends. Her marriage to Martin was one of love, but also of equality, and she realised early in their relationship that Marty was the only young man I dated who cared that I had a brain. Notorious RBG documents their mutual support for each other. RBG transferred from Harvard to Columbia law school when Marty moved to New York for work early in their marriage. This was questioned by no one, as this was how wives were expected to act. Many years later, when RGB was appointed to the DC Circuit Appeals Court, Marty left his position with a New York law firm to become a lecturer at Georgetown Law in Washington, a move which surprised many. But to RBG and Marty, both moves were just one supporting the other when it was needed, as they had both done throughout their marriage.

If you have no interest in the law or in women’s rights issues, this book may still interest you if you want a workout routine suitable for someone in their eighties. RBG enjoyed an active lifestyle which did not slow markedly as she aged. She made few concessions to growing old, but did agree to give up water-skiing when she turned seventy! Journalist Jeffrey Toobin once described her as frail, then found Marty Ginsburg in his face demanding to know how many push-ups he (Toobin) could do. For the record, Toobin was pushed to think if he could even do one, while Marty pointed out that his wife could do twenty-five. RRB's push-ups were part of her twice weekly session with a personal trainer who kept her in shape. One chapter in this book provides details of a typical workout session.

This is a well-researched book which provides an insight into the life of a remarkable woman. Highly recommended.

On the Basis of Sex Movie Trailer 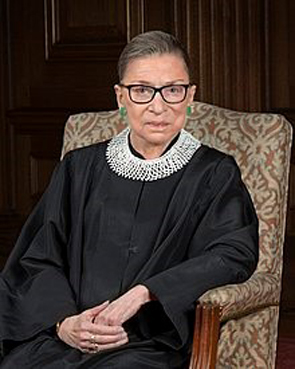 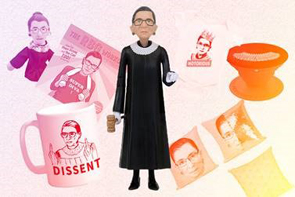 A quick google search yields an incredible range of RBG merchandise, showing just how much of an icon she became 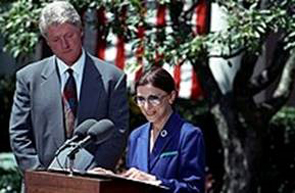 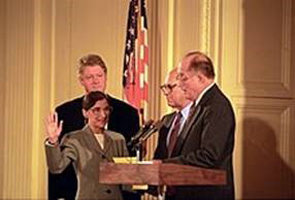 Ginsburg being sworn in as Associate Justice of the Supreme Court by Chief Justice William Rehnquist, as her husband, Martin Ginsburg, and President Clinton watch, 10 August 1993

The Meaning of RBG's Collars

RBG initially used her collars to add a female touch to the traditionally male robes, but they also had a subtle meaning. Her favourite was the white lace collar she wears in the official portrait pictured above. If she delivered the majority opinion of the Court, she wore yellow crocheted jabot with pink edges and gold appliqués. And if she is delivered a dissenting opinion, she had a special black collar, decorated with rhinestones. 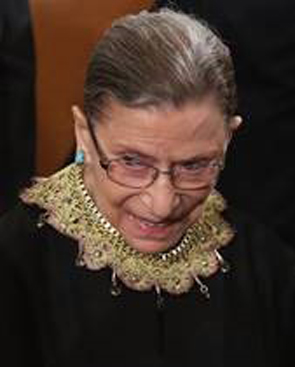 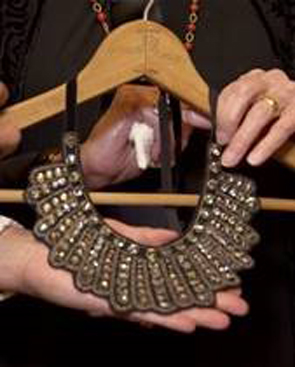