It's always a pleasure to open up a Bill Bryson book, and immerse yourself in whatever his new subject is. Notes From a Small Island is no different. This time we join Bryson on a farewell journey around Britain. Bryson, a native of Iowa, has lived in England for twenty odd years, with his British wife and children. He and his wife have decided to move to the U.S., and he has decided to take a 7 week farewell trip around Britain before they leave. Most of his journey is by public transport or hiking, with just the occasional taxi or hire car when he has no alternative. He doesn't seem to have made much of a plan for the trip. Often his destination is decided by where he can actually get to by train, or by which bus pulls up as he waits at the station.

He shares minute details of the trip with us (hotel details, what he had for dinner, how much beer he consumed) interspersed with observations on British architecture, British landscapes, eccentrics, British customs (both good and bad), and personal reminiscences from his time living in England, such as meeting his wife, or working as a journalist for a Murdoch paper in the days of sometimes violent protests by a number of print media unions following mass layoffs.

Bryson writes in a way that is both educational and funny. He can travel to a new place and somehow find out everything about the area. He walks the streets, he visits museums, he talks to people. He is able to go off on tangents and talk about obscure things and make them interesting. He genuinely sounds like he has an interest in everything, however obscure, and can talk about them in a way that draws you into being interested in them as well.

At times in this book he seemed grumpier than I recall from other books, but these are only brief interludes before his general good humour returns. You can really feel from this book just how much Bryson loves England, even if he spends much of the book complaining about town planners and the destruction of hedgerows.

Recommended for anyone wanting a light, enjoyable read, as well as for Anglophiles.

Bryson's follow-up to Notes From A Small Island 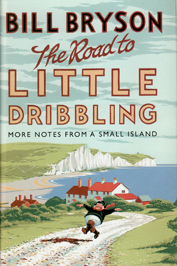 Did you know - this is a little-known fact but absolute truth - that when they dedicate a new multi-storey car park the Lord Mayor and his wife have a ceremonial pee in the stairwell?