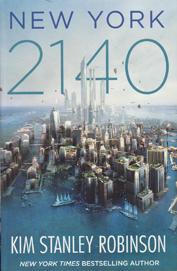 There’re two guys, Mutt and Jeff, quants, meaning they are advanced computer programmers, who see the corruption of the system and attempt an ill-conceived hack to change things. There’s Inspector Gen, a tall African-American police chief who is tasked with investigating their mysterious disappearance. There’s Charlotte Armstrong, head of the Household Union for the building in which they all live. Also, Vlade, her superintendent, Franklin, a speculator on the stock market and real estate who specialises in the intertidal areas of drowned New York; Stefan and Roberto, two orphan boys who stumble upon a fortune in gold from a sunken treasure; and Amelia, young and beautiful with an internet show of her own, flying the world in her air ship to rescue animals. Finally, there’s the citizen, or sometimes it’s the city, with an historic perspective on the political and economic landscape of New York 2140.

As Kim Stanley Robinson’s title suggests, this is futuristic New York. This future New York is beset by emergent problems of our own time; primarily, the effects of global warming due to the release of carbon, as well as the failures of the capitalist system. New York, and of course the rest of the world, has suffered two inundations caused by the melting of the polar caps, and now sea levels sit fifty feet higher than they did at the beginning of the twenty-first century. Added to this, sunken New York has become a topographical metaphor for the class distinctions and economic stratification of capitalism. Poor people continue to live in the intertidal zone in buildings awash with the rising sea, while the rich now enjoy super-scrapers, buildings now reaching as high as three hundred storeys, thanks to advancements in building materials. While the life of the poor is marginal, even dangerous given the possibility of building collapse, the rich enjoy their mega-expensive buildings in peace, maybe once or twice a year, while the rest of the time holding them only as investments, since they spend most of their lives in other places away from the flooding, like Denver.

One test of good science fiction is relevance. Any book has to have some relevance to its reader, whether it be the vicarious experiences of its characters or, as in a lot of science fiction, the displacement of current issues into another time and place.

As I read the book I was reminded of the housing shortage here, in Sydney, for instance. Housing has become unaffordable for many younger people. How to fix the problem has been the subject of a lot of debate. Do we allow younger people to dip into their superannuation? Do we remove tax concession for investors to make speculation less attractive? Whatever the answer, a situation in which average people can no longer afford a home when some investors have multiple properties, is clearly of concern.

That’s one aspect of this story. When a natural disaster hits New York it becomes the catalyst for popular action. The mayor is warned by Charlotte to make the super-scrapers, which sit mostly abandoned, available for housing after the disaster to help the thousands of refugees in Central Park. That’s the kind of tension between wealth and social conscience that the book dramatizes.

There are several plot lines in the book. There is first the disappearance of Mutt and Jeff, as well as the suspected hostile takeover being mounted on the building by real estate investors who seem to be using sabotage as a persuasive strategy. The search for the Hussar, a ship from the American Revolution with its bounty of gold, is undertaken by two young boys, Stefan and Roberto, and becomes germane to the course of events, while Amelia’s efforts to rescue wild life provides her other opportunities to help reform the system. Robinson’s plot seems disparate at first, but the loose ends begin to join. Robinson isn’t a dramatic writer. As in real life, aspects of the plot which seem to promise a dramatic denouement sometimes simply peter out. Robinson is happy to allow the tension to disappear from his plot while he explores the possibilities inherent in his philosophising. Much of his writing is compelling, but Robinson is also not afraid to expect patience from his reader.

Part of this is due to what makes Robinson different to a lot of futuristic writers. His writing is distinctly Utopian in its outlook. This is not to say that he is out of touch with reality or that he offers simplistic and unsatisfying narratives. He warns his reader:

… do not because of this quick list of transient political accomplishments conclude that this account is meant to end all happy-happy, with humanity’s problems wrapped up in a gift box accompanied by a Hallmark card and flowers. Why would you think that, knowing what you know? This story is about New York, not Denver, and the city is as ruthless as an otter. Its stories will always convey that awful New York mix of hypocritical sentimentality and stone-cold ambition.

Robinson sees the problems of our own time projected clearly into the future and explores their implications. His novels (I’ve read six now) offer a positive spin on the future, not because the future will be free of problems, but because he perceives that humanity and science have the capacity to address challenges, even if our humanity is also capable of undermining the progress we make. I think that to this end Robinson is more complex and sophisticated than a lot of dystopian naysayers who present dark possibilities, but only in monolithic visions of irretrievable stasis.

The front cover of my edition imagines New York over a hundred years from now, partly drowned from the rising waters of global warming. It is a place both familiar and different, with its super-scrapers dominating the horizon. However, while this landscape is integral to the story, the real story lies in finance and capitalism. Robinson’s target is the Global Crisis of 2008 brought about by sub-prime lending by American banks. In that crisis, the American government bailed out the banks because they were too big to fail. But that raised a moral issue. Ordinary people, paying their taxes, were funding banks for their bad business practices. In Robinson’s story there have been two further financial crises brought about by the rise in sea levels and unrepentant bank practices, and the government has again bailed them out incurring a public debt so huge that it could not be paid off in the remaining lifetime of the universe. (207) Over and over, capitalism is portrayed as an octopus with grasping tentacles, acquisitive and amoral.

Robinson’s story questions the basic tenets of capitalist practices. He is interested in deconstructing the assumptions about the system and in exposing its hypocrisy. However, Robinson is also interested in exposing the weaknesses of the system and to remove its monolithic aura. His is a revolutionary voice suggesting, through his fiction, that the system is vulnerable; that maybe there are means by which it can be changed in order to make the economy work for the common good.

New York 2140 is a detailed story involving multiple protagonists, so it’s hard to discuss the plot or characters in any detail here, or the many smaller issues the book raises. Despite this, some, some might criticise the book’s portrayal of society as one dimensional and simplistic. Certainly, New York as a religious and racial polyglot and the problems that might entail for the future are not considered, and if these problems have been magicked away in the past of this fictional New York, we are not told how. However, this is not what this story is about. Robinson takes pains, through his narrator the citizen/city, to explain that this story is merely a representation. It is the nature of Robinson’s narrative to be polemical. He is more concerned about questioning the short-sightedness of the capitalist model and its self-serving ideologues, like that great capitalist debunker of history, itself, Henry Ford, and people of his ilk. Robinson is a writer with a Utopian vision, which is not to say that everyone lives in paradise, but that he is concerned, much like Rousseau, I guess, with the nature of a social contract, and what that might mean to the vast population of this planet, given the environmental, economic and social challenges that face it. And while Robinson’s narrative is not as dramatically compelling as some other writers’, I think his intellectual strengths make him more than worthwhile to read. Robinson is a realist, in a narrow and rationalist sense, and he has many positive things to say. 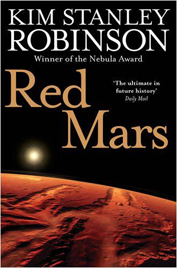 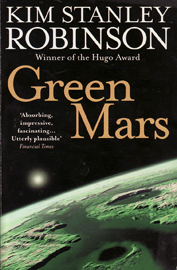 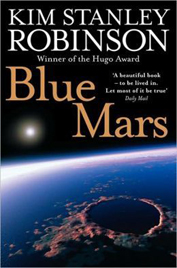 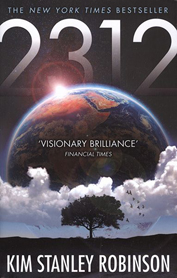 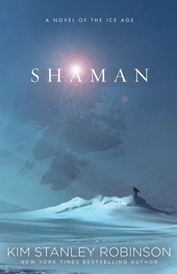 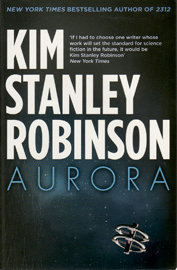