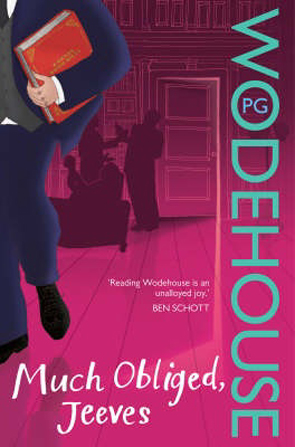 I’ve seldom had a sharper attack of euphoria. I feel full to the brim of Vitamin B. Mind you, I don’t know how long it will last. Too often it is when one feels fizziest that the storm clouds begin doing their stuff.

This is the 14th of Wodehouse’s ‘Bertie and Jeeves’ books. I was surprised to find out that it was written in 1971, as it has a feel of a much earlier age. I hadn’t known that Wodehouse was still a prolific writer into his 90s – he was 90 years old when he wrote this book and wrote a further three complete novels after it. He left a fourth unfinished when he died in 1975.

Bertie Wooster first appeared in 1915, in the short story Extricating Young Gussie, and made his final appearance in 1974, in the novel Aunts Aren’t Gentlemen. I’ve read a number of other ‘Bertie and Jeeves’ books over the years, and, without thinking much about it, had always assumed that they were all written in the 1920s to 1930s. The various plots Bertie finds himself entangled in, and the atmosphere of all the stories always seemed to have an Edwardian feel to me, redolent of the idle rich enjoying their privileged lives in country manor houses. I could picture Bertie enjoying a night at his club with Lord Peter Wimsey (the main character in Dorothy L. Sayers’s detective novels).

Maybe that’s why I find these books so appealing. They create the feel of a way of life that I will never be able to experience personally, but have enjoyed in so many different books and movies over the years. When you open a Wodehouse, you know what to expect and you are never disappointed. As Stephen Fry is quoted as saying on the back cover of this book, You don’t analyse such sunlit perfection, you just bask in its warmth and splendour.

One characteristic of all of the books is that Bertie is an amiable and well-intentioned young man. He is loyal to his friends and to the family members he likes, and will do anything to help them out. This of course leads to the ridiculous situations which form the plots of the books. In this book, Bertie is called upon by his Aunt Dahlia to come to aid of his old friend Ginger Winship. Ginger is the Conservative candidate in the Market Snodsbury by-election, and needs to win to keep his fiancée happy.

Fellow guests at Aunt Dahlia’s house include: Madeline Basset, former fiancée of Bertie, now fiancée of Spode; Spode, also known as Lord Sidcup, along term enemy of Bertie (and loosely based on Oswald Mosley, a prominent UK fascist in the 1930s); Florence Craye, another former fiancée of Bertie, now fiancée of Ginger; L. P. Runkle, a capitalist and new found enemy of Bertie; and Magnolia Glendennon, an attractive secretary to Ginger. Also in the neighbourhood is Bingley, a former valet to Bertie who once held extreme left wing views and who tried to dismember Bertie with a carving knife, and Mrs McCorkadale, Ginger’s opponent in the by-election.

With this combination of characters a mad farce is inevitable as Bertie attempts to support his friend and his aunt in their various endeavours, avoid any romantic entanglements and stay as far as he can away from Spode and Runkle. There are broken engagements, stolen silverware, a missing book detailing all the past misadventures of Bertie and his friends and various blackmail attempts. There’s also a side plot of an attempt to extract monetary restitution out of a bounder who ripped off the father of another of Bertie’s friends, leaving said friend with insufficient money to wed Bertie’s cousin Angela.

Bertie blunders his way from mishap to mishap, and just when it seems disaster is inevitable, Jeeves comes through to save the day.

It was a joy to immerse myself in another one of Wodehouse’s perfect farces. This book is just a pleasure to read. Highly recommended. 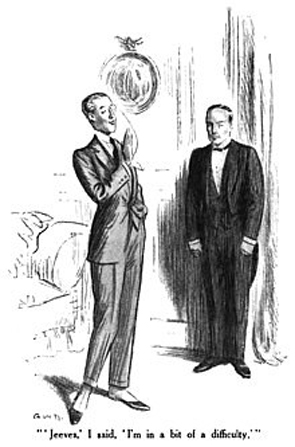 1922 Illustration of Bertie and Jeeves by A. Wallis Mills