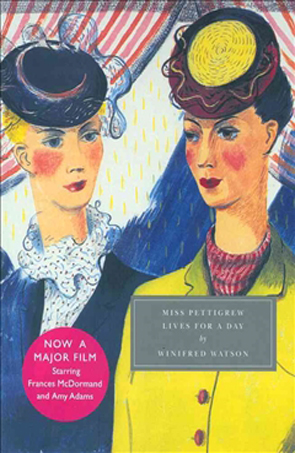 The back cover of Miss Pettigrew Lives for a Day describes it as a Cinderella story, and that’s the perfect description for it. But unlike the traditional tale, this Cinderella is also a fairy godmother as well, fixing problems throughout the day while being transformed herself at the same time.

Miss Pettigrew is a middle-aged spinster who works as a governess. She is currently out of work, and desperate to get a new position before she is forced by destitution into the workhouse. Through a mix up at the employment agency, she is accidentally sent to the apartment of Miss Delysia LeFosse, a nightclub singer, who advertised for a new maid, rather than the house of a woman seeking a governess. This begins a madcap romp over the day and through to the next day which changes Miss Pettigrew’s life.

Miss Pettigrew is basically a kind woman who has been repressed her entire life, by her parents and then by her employees and it seems by everyone she has ever met. The daughter of a curate, she was raised within extremely restricted boundaries, with every emotion suppressed in favour of what is ‘appropriate for a lady’. Any courage she initially possessed has been beaten out of her over the years. Miss Pettigrew sadly shows how social conventions and family expectations can hold you back from enjoying, or even just living, your life.

All these years and she had never had the wicked thrill of powdering her nose ... And all because she lacked courage. All because she had never thought for herself. Powder, thundered her father the curate, the road to damnation. Lipstick, whispered her mother, the first step on the downward path. Rouge, fulminated her father, the harlot's enticement. Eyebrow pencil, breathed her mother, no lady...!

But after mistakenly arriving at Miss LaFosse’s flat, her life changes forever. She arrives at a moment of crisis and manages to solve what seems to Miss LaFosse to be an insurmountable problem. From then on Miss Pettigrew and Miss LaFosse merrily drink their way between various men and parties, solving problems as they go.

Miss LaFosse has man trouble. She has three young men on hand, and is on the verge of making a very big mistake. At least Miss Pettigrew is sure she is about to make a very big mistake and is determined to do all that she can to make sure the beautiful and kind Miss LaFosse makes the right decision and ends up happy. Miss LaFosse’s dearest friend, Miss Dubarry, arrives, also with man trouble, and of course Miss Pettigrew has to help solve that problem too. Along the way she gets a complete makeover, has her first alcoholic drink (rapidly followed by her second, third, fourth, etc), and even her first kiss. Along the way she learns some valuable lessons about living your life doing things that are pleasurable, and which have no other motive except for pure enjoyment. She finds friends for the first time in her life and grows in courage as she supports her new friends, and is supported in turn. Miss LaFosse finds in Miss Pettigrew someone who can be the mother figure she never had, and in turn builds Miss Pettigrew up and allows her to be the best that she can be, rather than beating her down as everyone else has done to Miss Pettigrew in the past.

She, Miss Pettigrew, spinster, maiden lady, dull nonentity, jobless, incompetent, was bound for a night club, clad in splendour: painted like the best of them, shameless as the worst of them, uplifted with ecstasy. ‘Oh!’ thought Miss Pettigrew blissfully, ‘I think I’d like to die to-night before I waken up.’

There are a couple of problems with this story which some people might see as ruining the book, such as the occasional racist remarks and the suggestion that physical violence was needed to tame some women, or to impress them. But the book was written in 1938, and I think such attitudes were not uncommon at that time. I couldn’t quite decide if the anti-Semitism in particular was something that was thought by the author herself, or if Watson was rather exposing yet another set idea that Miss Pettigrew had of correct behaviours at the start of the day and was discarded with the rest over the course of the day. The comments Miss Pettigrew makes were probably common for someone brought up as she was, so although I think they would be a big problem in a modern context, I’m not going to condemn an older book just on this basis, despite them being a jarring note in this delightful book.

This is escapism at its best. A light and entertaining read, but one that I found to be a pure pleasure from start to finish. My edition of the novel reproduces the original sketches which were included in this book, and they add to the delightful experience of reading it. 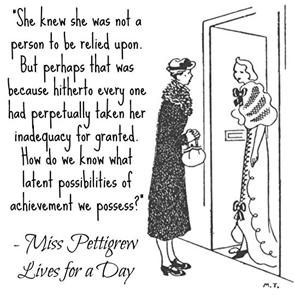 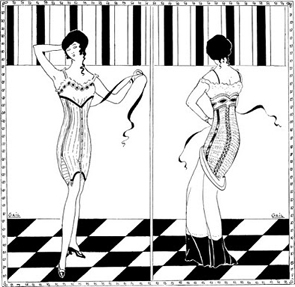 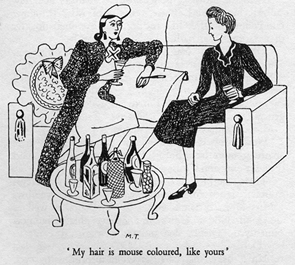 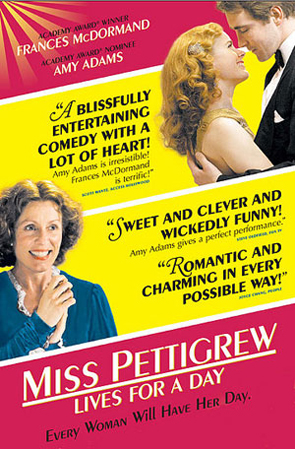 Winifred Watson's novel was adapted for the screen in 2008, starring Frances McDormand (Three Billboards Outside Ebbing Missouri) as Miss Pettigrew.