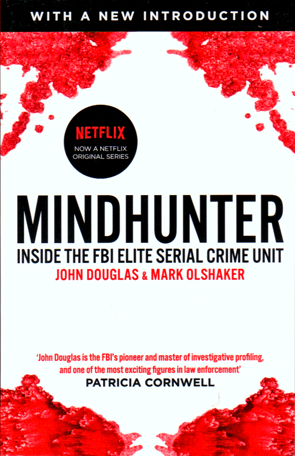 Mindhunter was originally published in 1995. This edition was republished in 2017 with a new introduction by Mark Olshaker, who originally collaborated with John Douglas in writing the book. John Douglas pioneered the practice of criminal profiling that has become the subject of crime shows like Mindhunter, obviously an adaptation from this book, and Criminal Minds. My interest in this book was piqued after watching several episodes of Mindhunter on Netflix. The show’s main characters, Holden Ford and Bill Tench, are clearly based upon John Douglas and Bob Ressler, with whom Douglas conducted ‘road schools’ – travelling to different police precincts to teach investigative techniques and form professional bonds – and interviews with incarcerated serial killers like Ed Kemper. Douglas’s mantra throughout the book is “if you want to understand Picasso, you have to study his art.” He means that to build a picture of the type of killer, one has to look at all the elements of a crime scene and question why they chose their victim and the method with which they killed them.

The television drama is excellent, and mainly (at least to the episode I am up to) portrays how Ford/Douglas and Tench/Ressler began to see the value of understanding the motivations, psychology and modus operandi of the kind of men – Douglas makes the point that almost all serial killers are men – they are trying to profile. The drama follows the book fairly closely, at least to begin with. They begin with Ed Kemper who revealed in his interviews an animosity towards his mother, which formed the basis of a string of murders, culminating in his killing his mother and sexually humiliating her corpse.

Douglas has investigated thousands of cases – he speaks of the heavy case load and the impact this has upon his family – which allows him to broadly characterise the kind of men who commit murders: socially inept; powerless; sexually incompetent, unconfident with or rejected by women; low status; angry. Douglas offers other broad analytical categorisations too, like whether killers are organised or disorganised, often a sign of their intelligence or the extent to which a crime was planned or was merely opportunistic. He makes interesting distinctions, too, like the difference between modus operandi and signature. For instance, there is the example of a bank robber who makes his victims undress and assume sexual positions while he takes pictures: his ‘thing’. The time wasted photographing them offers no benefit – it actually puts him at greater risk of capture – but he clearly feels compelled to do it. It’s his signature. By comparison, another bank robber in Michigan makes his victims undress as part of a strategy to embarrass and distract them, so that they are less likely to focus on other information that police might find useful. This is modus operandi.

Douglas demonstrates how the investigative tools he and his agents developed at Quantico can be applied to different kinds of crimes, to lure perpetrators into the open, as well as psychologically manipulate them into revealing their crimes in interviews. But the bulk of the book focuses on serial killers and how criminal profiling has proved effective in helping law enforcement identify and even convict suspects. Some of the detail in the book makes for uncomfortable reading, since most serial killings have a perverted violent sexual fantasy that forms the basis of the crimes. But the insights into the psychology of the perpetrators and the methods used can be fascinating.

Sometimes, Douglas’s conclusions are surprising. For example, Douglas interviewed Charles Manson as part of the study he conducted with prisoners. Douglas portrays Manson as a short, inadequate man with few options in life, using his wits and personality to manipulate others. But Douglas’s assessment is far from the monster portrayed in Helter Skelter, or the premeditated leader suggested by the brief scene given to Manson in Tarantino’s Once Upon a Time in Hollywood. Rather, Douglas suggests Manson’s message was largely hijacked by his followers and Manson had no choice but to support the killings after the Tate murders. To do otherwise would have cost him the power he had. Douglas’s assessment is that Charles Watson was the real instigator of the Tate murders. And even though Manson led his followers to the house of Leno La-Bianca two days later, Manson still didn’t enter the house to commit murder. He couldn’t because it would violate his parole, he said. Douglas believes Manson found himself compelled by his situation to sanction the crimes, and believes Manson on his own would not be a threat if released. Of course, Manson has now died and Douglas’s assessment can never be tested.

Douglas’s conclusions are occasionally shown to be counterintuitive in investigations, too. In the case of Francine Elveson, the hair of a black man was found on the victim, yet Douglas insisted the perpetrator would be white and live close by, based on the evidence of the crime scene, even though he couldn’t account for the hair. After Carmine Calabro, a white unemployed actor, was caught, the hair was found to have been from a poorly washed body bag used to transport the victim that had previously held a black male. Various other predictions throughout Douglas’s career, like that the UNSUB (Unidentified Subject – the name given to perpetrators) would drive a red Volkswagen, would stutter, had already been interviewed by police, had a military background, was of a certain age or occupation, proved uncannily accurate in many cases.

Of course, a suspicion that Douglas has cherry-picked cases that highlight the successes of the Investigative Support Unit is fair enough, although Douglas’s last chapter is devoted to cases that remained unsolved in 1995 when the book was first published. Interestingly, Olshaker’s new introduction reveals that several of the cases have subsequently been solved in the years after the book’s publication. But there is a sense throughout the book that Douglas has a political agenda. He documents not only how he and Ressler began criminal profiling, but also the tenuous funding situation he faced at critical moments – a failure could have killed the program – as well as the slow recognition of criminal profiling as a legitimate source of expert evidence in court cases. In that context, Mindhunter forms part of the ongoing strategy to have profiling as an investigative tool seen as legitimate. Given this, it is interesting which groups Douglas directs criticism at, and which he seems ambivalent about. Douglas occasionally speaks about the usefulness of psychics (any criticism of psychics is limited to a psychic who simply didn’t offer anything of value in a particular case). Yet he devotes a whole chapter to undermining psychiatry and psychology as legitimate disciplines for evaluating what is commonly referred to as the criminally insane. Douglas’ problem lies with what he describes as self-reporting assessments by criminals used by psychiatrists to evaluate their progress towards rehabilitation. Psychiatry possesses a different set of analytical tools which Douglas does not believe are adequately tested by actual results. His belief that the ‘dangerousness’ of subjects is not properly evaluated, and he gives several examples of repeat offenders who were released after psychological evaluations. Added to this, he gives an example of a psychiatrist who is not interested in the details of what his patient did to his victims as a broad criticism of psychiatry.

Of course, psychics don’t offer a viable alternative to criminal investigations, nor do they have systemic power. As for psychiatry, Douglas’ criticism seems fair enough, from the point of view that psychiatry should have a foundation in scientific verifiability, but this criticism skirts around the point he makes throughout his book, that criminal profiling could not be done by machines: that it is driven by human assessments and evaluations that are informed by experience and understanding of criminal patterns. Douglas provides anecdotal evidence of the one psychiatrist, but does not provide a professional context and perspective for the psychiatrist’s methodology, let alone anecdotal evidence of the limitations of his own methodology, except to acknowledge it is not possible to be entirely accurate. Nevertheless, it is the star cases that suggest a profound and superhuman insight akin the Sherlock Holmes, that Douglas emphasises when speaking about criminal profiling.

Part of the problem in this lies with Douglas’s unabashed support of the death penalty throughout his book. He is clearly disturbed by some of the crimes he sees and demands our empathy when he makes an association between young female victims who could just as easily have been his daughters. The argument against the death penalty is implicitly against handing psychiatrists the power to declare a killer rehabilitated, and his argument is entirely emotive. But by his own admission, juries don’t like insanity pleas and criminals rarely adopt that position, since it implies guilt. And from the evidence of convictions of the closed cases in this book, the killers Douglas is most concerned with are never getting out of prison. Yet as an advocate of the death penalty, there is clearly an impulse for revenge or Old Testament justice when Douglas states his position. At the same time, Douglas acknowledges the killers as victims, themselves, throughout his book: “I’ve never yet come across one who came from what I would consider a good background and functional, supportive family unit.” In fact, many of the serial killers possess a rage towards women that is most commonly attributed to abuse they suffered at their mothers’ hands from a young age. This is Douglas’s own assessment.

While much of Douglas’s book is fascinating and his work admirable, this is where I think a final assessment is contingent upon a reader’s attitude towards the death penalty. Those against it will find pause. Advocating the death penalty satisfies a visceral emotional response to these crimes, but its finality is troubling if someone is wrongly convicted. It also denies the foundation upon which a truly sane and just society is predicated: Douglas uses the word “love” to describe what is most needed. Douglas’s belief is that the kind of men driven to kill repeatedly are unlikely to be reformed, and I am inclined to agree. But state-sanctioned murder denies the religious principles I sense are the bedrock of Douglas’s assertions. Ironically, also, an efficient system of capital punishment would have denied him the very subjects upon which he has built his knowledge, and that has helped to incarcerate other dangerous killers.

Mindhunter is a fascinating insight into the world of profiling and police methods, along with the kind of personalities that are driven to kill. I’m not familiar with True Crime literature, although I know it is popular. This book is twenty-five years old now and remains as it was when first published, apart from the added introduction. As a result, most of the cases it deals with are from the 1970s and 1980s: 40 to 50 years ago. For many, like me, the interest in the book remains in the insights and story of John Douglas who pioneered this field of criminal investigation, as well as an account of the growing awareness of this kind of crime as it came to be more formally studied. However, devotees of True Crime may find other more recent works of greater interest and relevance. 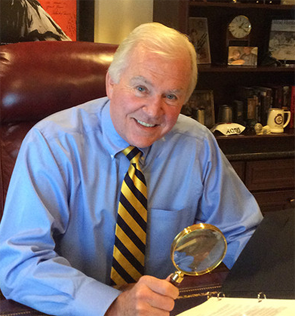 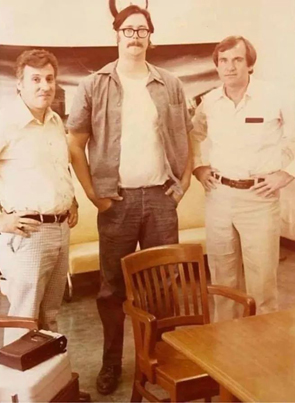 From left to right: Bob Ressler, Ed Kemper and John Douglas
Ed Kemper was a cooperative subject who gave Kessler and Douglas their first direct insights into the minds of Serial Killers. 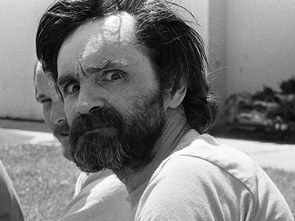 You can’t be in the same room as Charlie Manson and not be affected by his eyes – deep and penetrating, wild and hypnotic. He knew what his eyes could do and what effect they could have. He told us he spent his early life getting the shit beaten out of him, and with his small stature, there was no way he could win a physical confrontation. So he compensated by invoking the force of his personality.