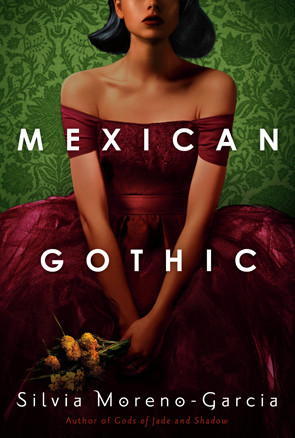 “The world might indeed be a cursed circle; the snake swallowed its tail and there could be no end, only an eternal ruination and endless devouring.”

This book is a great modern interpretation of the classic gothic horror tale. Moreno-Garcia has moved the location of traditional Gothic from the remote English manor house to the more exotic Mexico of the 1950s. Her heroine, Noemí Taboada, is a socialite. She is confident in herself and in her attractiveness. But there is more to Noemí than surface appearances. She is also a student of anthropology and wants to take a Master's degree, if her father will allow it (her parents would rather she settle down with a suitable husband). Despite this change of scenery and the strong central character, this book has all the hallmarks of classic Gothic horror. It is a book that allows you to sit back and enjoy a creepy tale replete with a formerly splendid mansion now crumbling away through neglect, set in a location high up a mountain with difficult access, where the electricity supply is limited and unreliable so that the family mainly use oil lamps and candles. It has an old family, once wealthy and powerful, now in reduced circumstances. There are ghosts, sleepwalking, possible madness, an older woman/housekeeper, a predatory male and Noemí as the sacrificial virgin. The house itself is a perfect setting for the story: a Victorian mansion with a general aim of gloom and decay, and the constant covering of mould on all surfaces. This was once a thriving estate when the Doyle's operated a profitable silver mine, but with the mine forced to close after a flood, is now reduced to family members and a few loyal retainers living with their memory of the past splendours.

Noemí’s cousin, Catalina, is married to the son of the house, the handsome Virgil Doyle. She married about a year before the story begins, against the wishes of her uncle, Noemí's father, who disapproved of the whirlwind courtship and wedding. Catalina had been raised in Noemí's house after the death of her father and the two girls had a close relationship. But they have not spoken in months, with Catalina living at the remote High Place, home of the English Doyle family, without easy access to the outside world. Noemí's father receives a disturbing letter from Catalina, begging for help, accusing her husband of trying to poison her and raving about horrors inside the house. Mr Taboada is concerned for the wellbeing of his niece, but also wonders if Catalina, whom he says has a tendency towards the melodramatic, may be merely exaggerating marital trouble as a ploy for attention. He does, however, have some suspicions that Catalina is genuinely ill, possibly in need of psychiatric help, and that Virgil is unwilling for her to leave his house in case she leaves permanently, thus depriving him of access to her money (the Taboada family is extremely wealthy). He sends Noemí to her cousin to see if there is a problem and to solve it, to remove Catalina from the Doyle house if necessary. If she succeeds, he promises Noemí that he will permit her to continue her studies.

After a day on a train and a long car ride up a mountain, with the mist getting heavier and reducing visibility almost to nothing, Noemí finally arrives at High Place and is immediately made to feel unwelcome by Virgil's Aunt Florence, the chatelaine of the house. She is not permitted to see her cousin, she is told not to smoke, she is scolded for speaking at the dinner table (and later is given all her meals in her rooms, reducing her contact with the family) and is warned to not wander far from the house due to potential dangers she will encounter. However, she gets a warmer welcome from the handsome and sexy Virgil and the elderly and repulsive Howard, Virgil's father and head of the house. Howard appears to enjoy talking to Noemí, mainly on the topic of eugenics and of the problems which come from the intermingling of superior and inferior types. Noemí is not impressed with his views, an attitude reinforced when she finds a eugenics journal in the library, with various marked passages, such as, the impulsive temperament of the half-breed mestizo. Adding to Noemí’s general feelings against the Doyles and the house in general, is her repulsion at a motif constantly repeated around the house, in carpets and wood panels and set in windows - a snake circling to swallow its own tail, Ouroboros, a classic symbol of the cycle of death and rebirth, of the renewal of life. The importance of the symbol becomes apparent later, but at the beginning, Noemí just wonders why anyone would deliberately choose such a repulsive motif with which to surround themselves.

This is slow paced book to begin with, gradually drawing you into the story and building suspense. By the end, though, the pace quickens dramatically as Noemí discovers the secret of the Doyle family and of the house. In the beginning, Noemí merely feels unwelcome in the house, but soon finds herself hallucinating and sleepwalking: she initially feels that Virgil is a friend but soon feels under threat from her unwilling but growing attraction to his masculinity; and her concerns that Catalina is not receiving proper medical treatment (the official diagnosis is tuberculosis) widens to a fear that they will all be consumed by the house. Along the way the story explores issues such as the impact of colonialism on Mexican communities, with the exploitation of the local workers by the Doyles as they accumulate fortune and power from the local resources. It also addresses to issue of women’s limited ability to take action in a patriarchal society. Noemí is a strong character, she takes all the steps she can to stand up to the Doyles, even if these steps sometimes cause more harm than good. She does not wait around helplessly to be rescued, but acts to save herself and the other people she cares for, but recognises that in many ways she is powerless against Virgil. With his legal rights as a husband, he can prevent her from removing Catalina from his house. In summation, Noemí is a well-rounded character who does not give in to anyone and who fights against overwhelming odds for those she loves.

I really enjoyed this book. I liked the slow pace, the steady build-up of tension and then the shocking reveal of what is actually happening. Mexican Gothic is a genuinely creepy story with just a teeny hint of science to make you wonder if that really could happen (I would give a link to some of the real science behind the story but that would be a major spoiler). Moreno-Garcia has made good use of the classic elements of Gothic horror to give us an eerie and atmospheric tale with an interesting twist. Highly recommended. 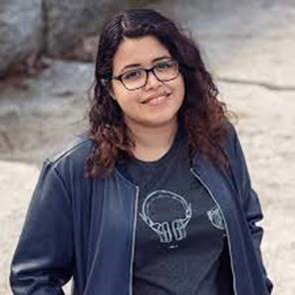 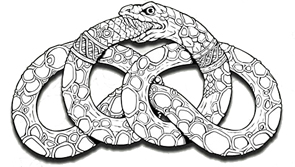 Ouroboros
The first known representation of Ouroboros is a from a shrine enclosing the sarcophagus of Tutankhamen. The name Ouroboros is derived from ancient Greek, since the symbol entered Western culture through Greek Gnosticism. It is generally interpreted as a symbol of the infinite or of renewal. In Mexican Gothic its repetition throughout the house imbues it with more sinister overtones. 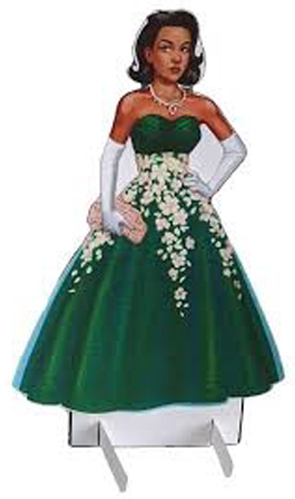 Want to immerse yourself in the world of Mexican Gothic? Check out Spotify for a suitable Gothic playlist inspired by the book, then click on the link to get your own Noemí Taboada paper doll, complete with many of the outfits Noemí is described as wearing in the book. This green evening gown is worn by Noemí in the opening chapter.

Alternatively, you can click on this link to open a PDF from the Random House website which will give you a few different outfits to dress up Noemí. Have fun!