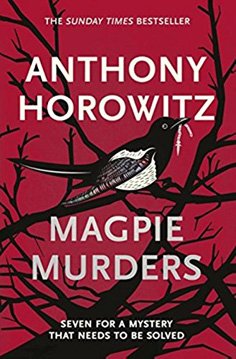 The first few pages introduce us to Susan, an editor for a small publishing company. Susan has just received the manuscript of the latest offering from the company's best-selling crime writer, Alan Conway. Susan can't stand Alan as a person, but loves his books, so she is happily anticipating another good, solid mystery.

The next 275 pages are the manuscript, a wonderful homage to Agatha Christie and other writers from the Golden Age of English mysteries. The mystery plays out along expected lines, with a bizarre murder worthy of Ngaio Marsh, and a full cast of suspects. The detective (Atticus Pünd) finally declares that he knows who the murderer is. We anticipate the reveal in the next chapter and, along with Susan, are frustrated that the final chapters of the manuscript are missing. Susan checks with the owner of the publishing firm, Charles, and learns that he was equally frustrated on discovering that the manuscript was incomplete.

Worse, he reveals that Alan Conway died the previous day, an apparent suicide due to learning that he is terminally and in-operatively ill. He had sent Charles a long letter declaring his intention, then threw himself off the roof of his tower.

Susan sets out to track down the missing chapters, or at least any notes left by the author so they can hire a writer to finish the story. She starts to see parallels between the book and Alan's life, and becomes suspicious that Alan was actually murdered, and the chapters deliberately taken to hide the reason for the murder. She starts her own investigation in the best tradition of a cosy murder story. And this becomes the second layer to the mystery, as Susan tries to find out who killed Alan, and find the missing chapters.

Like the victim in Alan's story, Alan has managed to upset many people and there are plenty of suspects. Susan struggles to untangle all of the motives she uncovers and reflects on her own inadequacy as a detective, compared to the ones in the stories. I loved Susan's musings about detectives in pages 181-183 and her thoughts on what exactly is the inherent appeal of the whodunnit – In a world full of uncertainties, is it not inherently satisfying to come to the last page with every i dotted and every t crossed? In a good mystery, all our questions are answered and order is restored to the world.

Apart from the two intertwined stories, there are little references scattered throughout the book to classic mysteries and mystery writers, especially Christie. Horowitz even mocks himself, like when a character criticises the title of the book as too close to Midsommer Murders (Horowitz wrote many of the early screenplays for the TV series). A cameo appearance I enjoyed was Agatha Christie's grandson who coincidentally turns out to have witnessed an important scene.

It's light-hearted, it's funny, and we get two separate mysteries to enjoy. Most of the characters in the manuscript have a counterpart in the current day story, and part if the fun is making the connections between the stories. In the best tradition of a Golden Age mystery, we are given full access to every clue. As an experienced mystery reader, I was able to spot some of the hidden motives – I correctly guessed that the vicar was a nudist – but the reveal came as a surprise, as it always does in the best mysteries. You look back over the clues and kick yourself for not noticing the significance of certain bits of information. I would recommend this one to all lovers of crime fiction.

Why is it that we have such a need for murder mystery and what is it that attracts us - the crime or the solution? Do we have some primal need for bloodshed because our own lives are so safe, so comfortable?