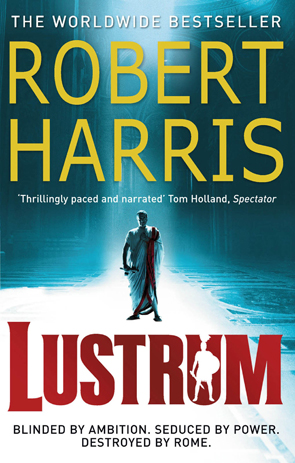 But the senate was not the arena for brute force. The weapons here were words, and no one ever knew how to deploy words as well as Cicero.

Lustrum continues the story of Cicero, told by his slave/confidential secretary Tiro. Imperium ended with Cicero’s election as consul. At the end of that book, he celebrated with his family and closest friends, but also foreshadowed were problems to come due to the uneasy alliance he had formed with the patricians, previously a group opposed to him. And of course, his actions at the end of Imperium gave him a new enemy, Catilina.

This second book actually starts as if it will be a murder mystery, when two days before Cicero’s inauguration he is called to view the body of a mutilated child pulled from the Tiber River. But this is seemingly forgotten by the next chapter when we return to the political manoeuvring Cicero faces each day in Rome. Cicero’s consulship starts in crisis, with Caesar threatening to prosecute an aged and senile senator for his involvement in the death of Saturninus 36 years earlier, unless Cicero supports a law Caesar and his cronies are introducing. The significance of the opening chapter doesn’t become important until much later. And then, when we have completely forgotten about it, the incident returns to snooker Cicero.

When the chief general in the state, the chief moneylender and the chief priest all start meeting together, the time has come for everyone else to be on their guard. – page 97

If Imperium was about Cicero gaining power, then Lustrum is about how he uses that power and his attempts to retain it. As the above quote shows, Cicero recognised early the possible threat that would come to him through an alliance of Pompey, Crassus and Caesar. While this threat does weave in and out of the story, and makes up a large part of the second half of the story, it is only hinted at in the beginning. The first part of Lustrum centres around the Catiline conspiracy and of Cicero’s handing of this threat to Rome and himself. The second part of the book follows the next four years (completing a lustrum, or five years) as Cicero has to deal with the impact of his actions during his year as consul.

Bikerbuddy has published a first year university essay he wrote on the Catiline conspiracy on this site, where he argues that Cicero exaggerated the threat that Catilina posed, and to some extent manufactured the conspiracy. Harris takes a different position in this book. Catilina was shown in Imperium to be a psychopath, and this is expanded upon in Lustrum. Harris’s Cicero genuinely feels that his life is in danger and that there is a very real threat to Rome and the Republic. There is a dramatic scene when supporters of Catilina attack Cicero’s house with murderous intent. However, Cicero doesn’t come out of the story spotless, as it is hinted that he manufactured the evidence used to initially remove Catilina from Rome, and then he uses what would today be called entrapment to lure Catilina into the open for the final confrontation.

Whatever the motivations of Cicero were in the matter, he was able to use the situation to gain acclaim as the saviour of Rome. In Rome, military prowess and physical achievements were valued over intellectual pursuits, and Cicero was always battling the perception that he was weak due to his lack of military service and his general squeamishness. So, when the Catiline conspiracy was exposed in the Senate, and Catulus ended the Senate session with a motion proposing a three-day public thanksgiving at every shrine to all the immortal gods for having favoured us at such a time with such a consul, Cicero benefitted by appearing to take strong action. This was the first time in the history of the republic that a public thanksgiving has been proposed for anyone other than a victorious general.

Caesar was the only Senator who did not join in the acclaim for Cicero, and indeed was the only senator to speak openly against the death sentence for the conspirators. Cicero had suspicions but no proof that Caesar was involved in the conspiracy, and was under pressure from the patricians to arrest him anyway and remove the ever-rising threat he was presenting.

Caesar plays a minor but gradually increasing role in Imperium, but becomes more prominent in Lustrum. He was already established as unscrupulous and not to be trusted, with his shifts in alliances, ability to manipulate the plebeians (learned from Cicero in Imperium), and with his tendency to bed everyone’s wives seemingly without discrimination. He then makes use of these dalliances as a source of information on his opponents. There is an image of him as a shark waiting in the water, the predator who is willing to wait. He has to wait many years, but by the end of Lustrum, Caesar is firmly in control of Rome.

Politics in Rome are murky, with alliances continuously forming and reforming, as illustrated when Cicero seeks help from Lucullus in a course of action he has decided to take:

Clodius is not a man I have any great liking for myself. But in politics one cannot always pick and choose one’s enemies, let alone one’s friends. To save the republic, I must abandon an old and dear companion. To save the republic, you must embrace the ally of your bitterest foe … Such is politics Imperator, and if ever the day comes when we lack the stomach for such work, we should get out of public life and stick to breeding fish!

The changing alliances eventually lead to Cicero’s fortunes changing. Caesar forms a triumvirate to rule Rome with Pompey and Crassus (known as ‘the Beast with Three Heads’), and with manipulation of the plebs, seems to have absolute control. Cicero is shown as having opportunities to save himself and join with Caesar’s group of power, but resists and retains his moral principles. These principles did become a little tarnished over the course of Lustrum, but ultimately Cicero shows that he will live by the title of pater patriae that he earned from his handling of the Catiline conspiracy and will do everything he can to protect Rome from aspiring dictators such as Caesar and Clodius.

This is an excellent book, weaving Roman history and many of Cicero’s famous speeches into a compelling and dramatic story. So far, I would highly recommend both Imperium and Lustrum to anyone wanting an exciting and well-written story, and I fully expect that the third book in the Trilogy, Dictator, will be equally as good a read. 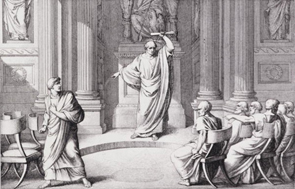