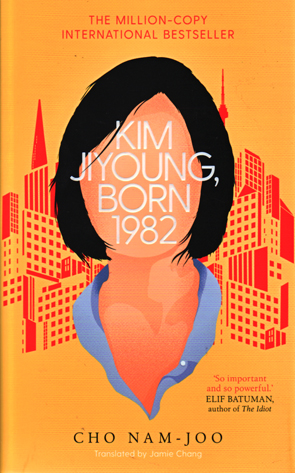 KKim Jiyoung, Born 1982 is about misogyny, the roles allocated women and the culture of sexism in South Korean society. It's the first Korean novel to break one million sales and it has been translated into eighteen languages. One senses from the last chapter of the novel, which acts as a coda, that the author consciously understands that her story is part of an emerging feminist push-back in South Korea. And while some men are beginning to understand there is an issue of inequality, many still don’t understand the impact of their own innate assumptions and prejudices. As Jones’s downfall became a story about interrogating and undermining abusive patriarchal power, Nam-Joo’s novel self-consciously exists within that paradigm, too.

Kim Jiyoung, Born 1982 is more than just a novel with certain themes. Nam-Joo provides factual context to many scenes within the story. This is not a complaining memoir of a woman in South Korea: rather, it represents the ingrained structural and social barriers against South Korean women. Nam-Joo achieves this with factual digressions in the middle of Kim Jiyoung’s personal account, which are further supported by footnotes that cite sources. Nam-Joo’s treatment is not only a personal account – she has admitted that much of the inspiration for the story rests on her personal experiences – but sociological. In Korean, the protagonists name is akin to ‘Jane Doe’ in Western culture. Kim Jiyoung is an everywoman.

The novel begins in the Autumn of 2015 when Kim Jiyoung’s behaviour appears to be becoming irrational. She adopts the persona of a women who died a year before. She speaks out against her father-in-law during a family dinner. Her age and her sex should have prohibited this. When her husband books a session with a psychiatrist, she agrees to go. The story then takes us back to 1982, the year of Jiyoung’s birth, and thereafter progresses chronologically.

The narrative, itself, is quite pedestrian. I found its linear form had a peculiar effect on my reading. The brief opening which recounts the novel’s present makes us aware that Jiyoung’s life is not going to be exceptional. We know her fate. She will marry a Korean man and she will have children. So, there is an inevitability in the story that is inescapable, trudging towards a known conclusion that is unremarkable. This gives the story a claustrophobic effect as we witness Jiyoung’s attempts to make something of her life, while also knowing by how much she will fall short of her dreams.

Jiyoung’s story is divided into chapters that represent periods of her life delineated by ranges of years: her childhood, adolescence, early adulthood and then marriage. Each chapter dramatizes Jiyoung’s goals and her attempts to achieve them, from her desire to do well in education, to her early career in marketing. But like many South Korean woman, Jiyoung’s dreams fall victim to the exigencies of childbirth and raising a child. Women don’t stay because you make it impossible for us to stay she tells her boss, who complains of her leaving. As such, the story represents the structural and social attitudes that hold women back: things like maternity leave and attitudes to women who take advantage of it; of attitudes against women who choose to become full-time mothers; of the hiring practices governed by traditional male attitudes that promote fiscal over social responsibility, and in turn effectively lock women out of more senior positions. It raises a question typical of the novel: …is it right to prioritise short-term efficiency and balance sheets? Who’ll be the last ones standing in a world with these priorities, and will they be happy?

Added to this is a darker underbelly of misogyny. As a male it was depressing to read the litany of poor behaviour, ranging from more minor issues like pranks at school and male privilege from an early age that develop entrenched attitudes, to darker moments of stalking and threat. During Jiyoung’s school years a flasher regular exposes himself to the girls of Jiyoung’s school. It takes a group of five girls to bring him down and take him to the police. Naturally, the girls are punished for their behaviour. Later, there is an incident in which security personal at the company where Jiyoung formerly worked have installed secret cameras in the women’s toilets and change rooms. They’ve been uploading the footage to a porn site. When one of the manager’s discovers the footage on the internet, his response is to share it with his male colleagues.

When the Korean financial crisis of 1997 hits, it is women who are most disadvantaged. Eunyoung, Jiyoung’s sister, is forced to give up her dreams of being a journalist, and is asked to become a teacher to help support her family, instead. Their mother, Oh Misook, steers her husband away from a poor business decision, sells her apartment, helps set up a new business for the family to prosper, but it is her husband who claims the credit for success. For Jiyoung, she faces the prejudice against professional women endemic in South Korean culture. It is almost impossible to get a job: The dumb girls are too dumb, the smart girls are too smart, and the average girls are too unexceptional.

Another question asked by the book: Do laws and institutions change values, or do values drive laws and institutions? Surely there is some reciprocity in this process. But the implication is clear enough: that laws need to change to reflect changing social conditions, because that is the only way to change values over time. Nam-Cho’s book is one piece of that emerging culture of change and it self-consciously places itself within the social debate. It’s non-fictional digressions and footnotes signal the author’s anticipation that the book will receive criticism. And it has. Apparently there has already been suggestions that a male version of the book should be written to balance or counter Kim Jiyoung, Born 1982. The psychiatrist, whose thoughts conclude Nam-Cho’s novel, perhaps exemplify the position of many men at this point. He acknowledges that he hadn’t considered the problems faced by women in South Korean society, and the difficulties with his son have made him aware of the challenges women face raising children. But his wife’s interest in mathematics puzzles him and the thought that the female therapist who worked for him had value beyond her snappy looks is yet to arrive in his thoughts. Nam-Cho’s novel is not a compelling fictional read, but it has compelling sociological value. It has clearly struck a chord in South Korea and has started conversations. Those conversations can make change happen, which is why this book is important. 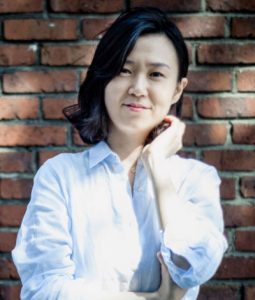 She had looked around the office one day and realised that there were no women above a certain pay grade. She spotted a pregnant woman in the company dining hall and asked the people at her table how long the company’s maternity leave was, and none of the five, including one department head, knew the answer because none of them had ever seen an employee go on maternity leave. She couldn’t picture herself at the company ten years down the road and resigned after some thought. Her boss grumbled, ‘This is why we don’t hire women.’ She replied, ‘Women don’t stay because you make it impossible for us to stay.’

11 Yun Jeonghye, ‘Current Use of Parental Leave and Its Implications,’ Report on Employment Trends, July 2015