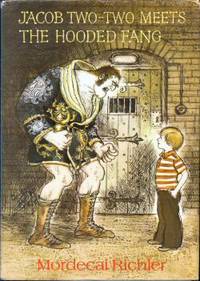 This is the second book I have read recently from my childhood. This book was originally read to my primary school class from a large hardback edition. I remember that our teacher read it well and held up the illustrations for us to peer at from our positions on the floor, sitting cross-legged. The copy I have, owned for several years now, is only a small paperback, which is somewhat disappointing. Part of the magic of hearing this book for the first time – I must have been very young to be impressed by so little – was the floor mats we would sit on as a class, rolled out for special treats like this, and the size of the book, which I assumed must be a special book especially given to teachers.

Jacob Two-Two of the title, is a young boy, possibly only a little younger than the age I was when I was read this book: two plus two plus two years old. Everything in Jacob’s life seems to be identified in twos or lots of twos. He has two brothers and two sisters, as well as “two ears and two eyes and two arms and two feet and two shoes.” Jacob Two-Two says most things twice because his family rarely pay him attention. His efforts to help or show independence are dismissed because he is so young. His sisters and brothers can all “ride-two wheel bicycles, dial a telephone number, whistle, do joined-up writing, play draughts, and catch a ball.” Jacob Two-Two can’t, and he sometimes feels excluded as a result.

This alone makes Jacob Two-Two appealing to young children. Mordecai Richler taps into the frustrations of the very young and their aspirations. He allows Jacob Two-Two to speak with the confidence of the very young, while also giving voice to the overwhelming feelings that new experiences can bring. When Jacob Two-Two’s father finally relents and allows him to go to the greengrocer on his own to buy “two pounds of firm, red tomatoes”, Jacob Two-Two is both elated and “just a little frightened because this was his first errand”.

But the real magic of the book is the way it weaves a fantasy world from the ordinary everyday world, along with its tremendous humour. When Jacob Two-Two repeats his order of “two pounds of firm, red tomatoes” to Mr Cooper, the Greengrocer, Mr Cooper responds with mock-outrage that he should be made fun of, and possibly carries the joke too far for the credulous Jacob, when he calls a policeman into the shop to play along. Jacob Two-Two flees and runs into Richmond Park, through the iron gates that “were shut after dark, like prison bars”. There are hints all through the opening chapters of the fantasy adventure Jacob Two-Two will have when he presumably falls asleep in Richmond Park and dreams. His brother and sister, Noah and Emma, have rejected him from their make-believe game as they take on the heroic identities of the intrepid Shapiro and the fearless O’Toole. His older sister, Marfa, has been watching the Hooded Fang wrestle on television. She tells her impressionable little brother that the Hooded Fang “will jump out of the TV set any minute and chew you two bits.” And a seemingly exasperated Mr Cooper demands Jacob Two-Two “be charged with insulting behaviour to a big person.”

The premise of the story, of course, is not original. The idea that Jacob Two-Two’s problems from real life will be resolved in his dream is familiar from The Wizard of Oz, for instance. But Jacob Two-Two’s dream world is wonderfully realised by Richler. His fantasy world is filled with outrageously egregious adults and situations, with laughable names that tell us everything we need to know about each character. Jacob’s barrister before the children’s court is the hapless Louis Loser who has never won a case. Jacob is worried he cannot afford to pay Loser: “If you could afford it, you’d pay me to stay home in bed,” is Louis Loser rejoinder. Jacob’s judge is the overbearing Mr Justice Rough, who leads his court in chants that reinforce the demoralising maxims of childhood: “BIG PEOPLE ARE NEVER WRONG”; “FOR YOU OWN GOOD” and the high-minded claim that it hurts grownups “MORE THAN IT HURTS YOU”.

But the centrepiece of the story is the Children’s prison on Slimer’s Isle, where awaits the dreaded Hooded Fang, the one-time wrestler, turned prison warden. The children’s prison is accessed by a wonderfully ridiculous array of transport – “car, train, bus, canoe, helicopter, ox-cart, rickshaw, stilts, dinghy, skis, submarine, flying balloon, camel, raft, dog-sledge, roller skates, glider and motorcycle” – escorted by Mistress Fowl and Master Fish (who look exactly as their names suggest), who warn Jacob Two-Two of vampires, kidnappers, monsters and aliens, and force him to bail out their boat to prevent its sinking into the murky waters inhabited by “blood-thirsty sharks” and “slimy crocodiles”, as they paddle towards the prison.

One fact that is interesting to consider is that Mordecai Richler was a Canadian writer, yet he chose to set this novel in England. It surely isn’t reading too much into this to assume Richler chose England because Jacob Two-Two’s story is meant to be a modern-day Dickensian fable. The contempt shown to children and their comic book punishments for trifling crimes (like getting sick when visitors are expected) recalls the treatment of children that Dickens chronicled in his novels over a century beforehand. In fact, Fritz Wegner’s original illustrations specifically recall the poverty of workhouse children in the nineteenth century. Jacob Two-Two is a young Oliver, and the Hooded Fang turns out to be as puffed up and toothless as his predecessor, Mr Bumble, the Beadle. 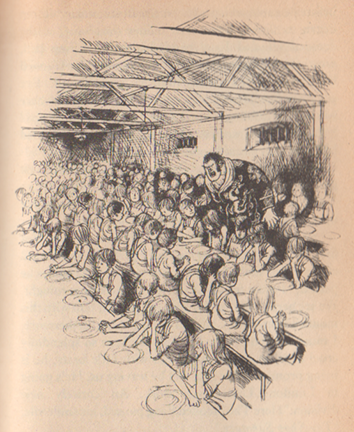 “All of them dressed in itchy, ill-fitting, grey prison uniforms, their faces pale, circles under their eyes, because on Slimers’ Isle they never, never saw the sun.” (Page 44)

This kind of social commentary in what is – let’s face it – a fun childhood fantasy story, is perhaps not so misplaced. Attitudes to the disciplining on children were somewhat different in the 1970s.

But what children will love about this book is that it is easy to read. It has short chapters and the book is very short. It still speaks to children’s concerns about autonomy and the wider world. It filters the world through a child’s perspective. And it’s really very funny. Apart from that, this is a book about the empowerment of children. All this adds up to an appealing read for primary school children, and even for adults who like good children’s stories.

Mordecai Richler’s book has twice been translated into film. A version by Theodore J. Flicker appeared in 1978, and a second version was made in 1999 by George Bloomfield, starring Gary Busey as the Hooded Fang. There has also been an animated television series produced in 2003. The trailer, above, is for the 1999 film.
Widget is loading comments... 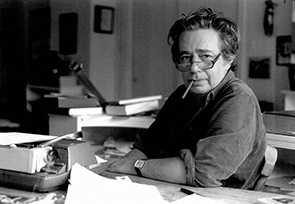 Mordecai Richler
Apart from the Jacob Two-Two series, Richler was also known for his adult fiction. His St. Urbain's Horseman (1970) and Solomon Gursky Was Here (1989) were both shortlisted for the Booker Prize.