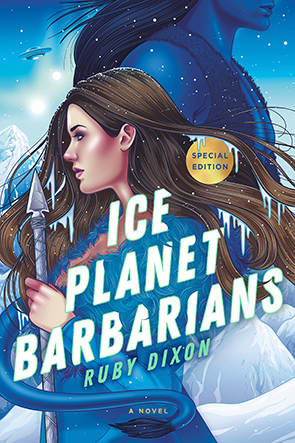 “I’m not going to die yet, and a strange guy with horns is determined to give me oral pleasure. It’s just that . . . out of all the worst-case scenarios I’ve come up with since being abducted by aliens, being licked until I come isn’t anywhere on the list.”

– Georgie’s thoughts on being captured by Vektal, a big blue, horned alien

Can I say YouTube made me do it? I first encountered this book when a BookTuber I follow did a live video of him reading this book and reacting to it. It sounded hilarious so I looked for a copy. At first the only copies I could find were in ebook format, but then I found this special print edition. I had to wait a few months before I could get a copy in Australia, but eventually I had it in my hot, little hands.

Some history first: Ice Planet Barbarians was originally published as a serial online, then as an ebook. It spawned numerous sequels (21 novels plus a few novellas last time I checked) and several spin-off series. The series was popular with a small but dedicated group of readers. The book then became an unexpected hit in May 2021, thanks to TikTok. Its reputation spread rapidly over social media until even I, who had no idea that alien smut was a thing, became aware of its existence. I gather from the author’s note at the end of the book that the print edition varies a little from the original version – it has a bonus epilogue included and a rape scene has been removed from the opening chapters. It’s still obvious a woman is raped, but at least in the print version it’s not graphically described, I’m glad to say.

This was such a fun book to read, and dare I say it, rather stimulating. Quite unexpectedly, I really loved it.

We start with our main female character, Georgie, being kidnapped from earth by some evil aliens, along with about a dozen other women. The women don’t know what these aliens have planned for them, but they suspect it’s nothing good. The aliens have some trouble with their spaceship and dump their cargo of women on an ice planet. There are six women in life support pods. The rest are jammed into the remaining cargo bay. The aliens have already shown that any slight misbehaviour by the women is punishable by rape and beatings, so it isn’t hard for the women to realise that the aliens don’t care if they survive or not. They intend to pick up the women in the pods when they return.

Left with no food, no water and no heating, the group pick Georgie as their leader and send her out into the ice planet to see if she can find help. Georgie is already freezing when she steps into a trap. She thinks she’s about to become dinner for some hungry creature, but instead she meets Vektal. Vektal is our titular barbarian, a huge blue alien, complete with horns. Vektal instantly “resonates” for Georgie, his tribe’s method of identifying their perfect mate, and greets her in the traditional way you expect a male to greet a female he wishes to court – with oral sex – using his ridged tongue. In fact, Georgie discovers that all of Vektal’s appendages have ridges, and that these ridges are extremely effective!!! From then on in it’s basically one big fuckfest for Georgie and Vektal. Once she decides she likes him and consents to the fuckfest of course.

So yeah, Ice Planet Barbarians is basically fantasy romance/erotica within a sci-fi setting. But it’s well written erotica that’s designed to be appealing to cis-females. Vektal is really all a woman could dream of in a partner: he’s loving and supporting, will do anything to protect his woman and anything to give her pleasure. Although he is a bit surprised that Georgie would consider leaving when an opportunity arises, Vektal accepts that he can’t force her or any of the other women to stay on the planet against their wills. Surprisingly, there are discussions of consent and free will, and no coercion of any kind (unlike the violence and coercion practised by the aliens who initially abducted the women to begin with).

I enjoyed the world building in this story. I became invested in the characters and cared what happened to them. And I enjoyed the detailed sex scenes. This isn’t a book that’s meant to be taken seriously; it’s meant to be entertaining and sexy and just plain fun.

There was only one part I found a bit forced – Georgie and Vektal shelter one night in what he calls the Elders Cave, a strangely shaped smooth cave that has stars shining beneath the ice on its walls. Georgie realises this cave is actually a spaceship and that it still has power. The on-board computer provides some exposition to give Georgie some essential information about the planet, some survival tips, and it finally transmits a translator into her brain so she can suddenly talk to Vektal in his language. This has the benefit of moving the story along quickly, but it did seem a bit forced for plot convenience. The spaceship, of course, also gives Georgie a hope that the women have a way to leave the planet, if they want to.

So, would I bang a 7 foot tall blue alien if I was trapped on an ice planet? You bet I would. But will I read any more books in this series? Highly unlikely, but you never know! 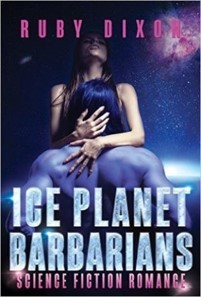 The Original Cover
The cover of the print edition skips the naked people having sex, perhaps to save readers from embarrassment if they’re reading in public?