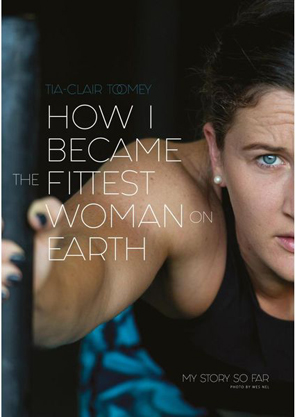 How I Became the Fittest Woman on Earth
Tia-Clare Toomey

My Story So Far

This book was written just after Tia won the title ‘Fittest Woman on Earth’ in 2017, the title awarded to the winner of the annual CrossFit Games. Since then she has gone on to win the title in 2018 and 2019 as well, the first woman to take out the title three times. The video at the end of this review has some highlights from the 2019 games. I included it because I don't think CrossFit is particularly well known as a sport and I wanted people reading this to have some kind of idea of what the top competitors need to achieve, and just how good Tia is. I'm not sure why she decided to rush this book out so quickly - maybe a lack of confidence that she would win again? She is a favourite to take out the 2020 title, if the games go ahead and if she competes. On a side note, the 2020 games should have been held last weekend but have been postponed due to COVID-19. But Tia had already expressed her possible non-attendance several months back following controversial anti-BLM statements made by the then owner and CEO of CrossFit. It remains to be seen if she will compete in the rescheduled games, now that the company has been sold.

This is a very short book, only 189 pages, and that includes a pile of photos, weight-lifting training programs, and a diet guide (macros based), including Tia's favourite green smoothie recipe. The print is also large. So, I read this very quickly.

The early part of the book is basically Tia's early life on the Sunshine Coast in Queensland, and becoming interested in running at primary school. To get more competitive at running, she realised she needed to train regularly, and started getting up at 4:30am to run measured distances across her family's large rural property. This basically set the pattern Tia has followed since, doing everything she possibly could to achieve her goal. When she started CrossFit and set a goal of winning the Games, she went about training with the same determination she showed at age 10 when she wanted to win at school State Championship running.

This is not a particularly well-written book and could use a good editor. Tia tends to be a bit repetitive, especially with her adjectives (everything is ‘crazy!’). It reads more as though someone transcribed her chats with an interviewer. But she seems to be good natured and humble about her achievements, and absolutely dedicated to her sport. Her story also demonstrates the importance of being supported by the people around you, as she acknowledges she would not have succeeded without the support of her parents early on, then later by her boyfriend/coach/now husband Shane.

Overall, Tia has an inspiring story to tell. Her comments on body image especially spoke to me: Tia became much more relatable when she spoke about her body and how she looks. I think she has an important message here for young girls to be proud of having strong bodies and to be less concerned with societal expectations of what female attractiveness should look like. This, and Tia's chatty style, made the book worth reading, in my opinion.

Tia-Clare Toomey and highlights from the 2019 CrossFit Games
Widget is loading comments...

I have loved to compete since primary school; where I lived for sport, particularly running, and would push myself to the limit to become better than yesterday. It may come as a surprise to you, but I always came second. I was always the underdog, that person who just fell short. I never gave up, I just felt that fire in my belly get stronger and stronger – I wanted do more, be more, achieve more.

The day I finally came first was something I had always dreamed of. At twenty-four years old, I was crowned the winner of the 2017 Crossfit Games and officially became the Fittest Woman on Earth. When I heard my name called in front of thousands of cheering fans, I felt like I was invincible. I was on top of the world and suddenly everything up until that point actually made sense.

With the support of my partner, Shane, my family and my coaches along the way, I was able to achieve my dream of being number one. This is the story of how I got to where I am today. I hope you enjoy it but more importantly I hope it inspires you to dream big, work hard and never give up!