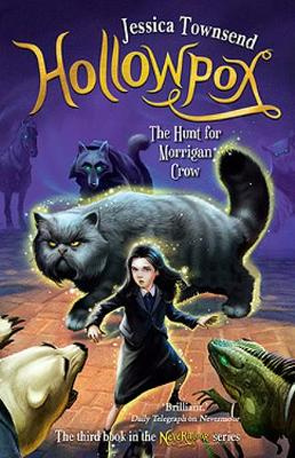 The Hunt for Morrigan Crow

This third book in the wonderful Nevermoor series, Hollowpox: The Hunt for Morrigan Crow, continues the story of Morrigan Crow and her friends in Nevermoor. I've been looking forward to this latest book for about a year and I wasn't disappointed: the story and the expanded world live up to the previous books. The story is getting darker as the series continues, and the impact is getting wider. The first book, Nevermoor: The Trials of Morrigan Crow, was mostly about Morrigan, about the importance of her earning a place in the Wundrous Society (Wunsoc). The second book, Wundersmith: The Calling of Morrigan Crow, has Morrigan safely in Wunsoc but having to establish trust with her classmates. It also had the wider problem of the illegal market where Wunsoc members with extremely valuable talents are sold like animals. This third book centres around a much broader problem, with the outbreak of a highly contagious disease that infects only Wunimals (anthropomorphic animals who are generally peaceful and highly intelligent members of Nevermoor society). Morrigan also increasingly takes a more active and independent role with each new book, reflecting that she is both growing up and growing into her responsibilities.

Fantasy novels are usually escapist, but many parts of this story were scarily like our current world. If someone were to read this book in about ten years’ time, I think they would roughly look at the release date and assume that it had been written after the COVID-19 pandemic. But I read the publicity blurb for this book around a year ago, so it seems Jessica Townsend might actually be an oracle (like Lambeth, one of Morrigan's classmates from Wunsoc, whose knack is being a short range oracle). The line, But in many ways the lack of official information made it worse. Rumours and inaccuracies spread like wildfire, until nobody knew what to believe, could have easily been written about our own world and the spread of misinformation about COVID-19.

And apart from the parallels to the pandemic, much of the storyline seems centred around other current global issues, such as racism and rights of citizens. Hollowpox, the name given to the disease in the book, only infects Wunimals, but infected Wunimals become violent at the peak of their infection and attack everyone around them. Predictably, many citizens of Nevermoor and the Free State in general, start to call for all Wunimals to be locked up, for their own safety of course. Morrigan, as a new arrival in Nevermoor, just accepted Wunimals as part of life in the Free State but finds out now that Wunimal rights are fairly recent, and that it was only eight or nine Ages ago that it was legal to keep some Wunimals as pets. An Age is usually around twelve years long, so that would be around one hundred years ago. It’s not hard to equate Wunimal rights with the Civil Rights movement.

There are many examples in the book of bigoted attitudes to Wunimals, such as a pair of guests (possibly gate-crashers) at a party at the Hotel Deucalian, who mock a Dogwun in the crowd and are overheard saying, I'm sick of having to be so respectful all the time. When Fenestra, a Magnificat who is the house-keeper at the Hotel Deucalian, tries to intervene, her appearance is met with contempt: The woman twitched with revulsion. ‘Another talking unimal! Who in the Seven Pockets wrote this guestlist? They ought to be arrested for crimes against decency.’ When Jack realises tensions are increasing, he suggests to Fenestra that they should ignore the provocation. Fenestra wisely responds: ‘We don't ignore bigotry, Jack,’ said Fenestra. ‘That's how cowardly bigots turn into brave bigots.’

In the book we have the highly vocal group the Concerned Citizens of Nevermoor, that clash violently at times with the Wunimal Rights Group , and the Stink (as Morrigan’s patron Jupiter calls the Nevermoor police force) supporting the right of the bigoted Concerned Citizens group to stir up hatred in the community. Morrigan is shocked to discover that Wunimals also live in the Republic, the neighbouring country where she was born, although they are forced to live in remote communities, mostly in secret, in fear of their lives from the Republic government. Fenestra is revealed to be involved with a group who secretly smuggle Wunimals from the Republic across the border into the Free State. The possibility that the Republic is the source of the Hollowpox adds to the political tensions between the Republic and the Free State.

There’s even a thinly disguised reference to Greta Thunberg at one point in the story, to add to the parallels with our own world. The President of the Republic, upon meeting Morrigan, says to her, Oh dear, you're not one of those teenagers who cares about the state of the world? How dreadful echoing the patronising statements often made about Thunberg.

Leaving aside these parallels, what do we get from Hollowpox? We get to increase our knowledge of Wunder and the history of Wundersmiths in general. We also get an expansion of the world of Nevermoor, as Morrigan learns more about her adopted home. Each little bit we learn adds to the complexity of the world Townsend is creating in these books. One of my favourite sections was the class visit to the Gobleian Library (a reference to the Bodleian Library in Oxford I presume?) This was a fantastic chapter, where the class steps through the revolving doors and seemingly finds themselves back in Nevermoor, but an alternative Nevermoor that has no traffic or people. It is a city filled with books: Endless rows and rows of shelves reaching almost as high as some of the buildings, stacked with millions – maybe billions – of books, as far as the eye could see. Of course, being Nevermoor, the library isn't completely safe, and the class has to face a violent attack of book bugs which they only just manage to survive.

I loved this book and am already anticipating book four in the series. The ending has an interesting twist that suggests the story is about to get a lot more interesting. Highly recommended. 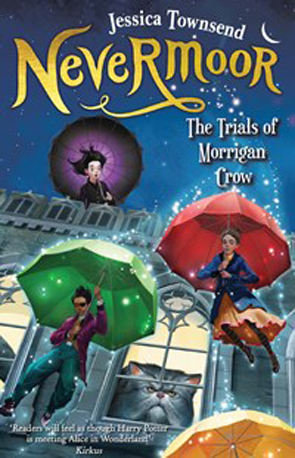 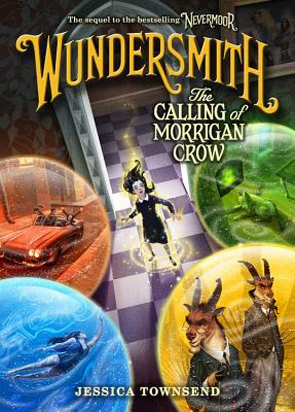 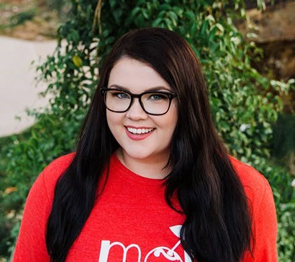