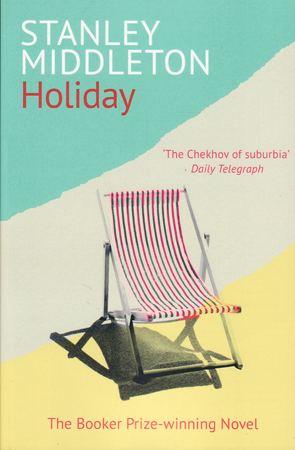 When I finished Stanley Middleton’s Holiday I was reminded of a line I thought I remembered from John Fowles’s novel, Daniel Martin, which I read over 25 years ago: Happiness is an act of intelligence. I haven’t been able to trace it down, though. Perhaps my mind paraphrased it over the decades, watered it like a strong brew into a tepid tea. The following from the end of the novel – an ending in defiance of intellectual fashions against sentimental happiness, if Fowles’s assessment of serious modern literature were to be believed – possibly sums it up, also: No true compassion without will, no true will without compassion. Dan is talking about Humanism and the desire to find common ground and happiness between people. Without a strong longing and will, the likelihood of compassion or happiness or any other positive outcome between people is unlikely.

It was a thought that returned to me as I finished Holiday, which I will say has a happy ending of sorts. Fowles had stated in an interview with Susan Onega while talking of Daniel Martin that the whole drift of modern intellectual European life is that life is hell, it is absurd, it is tragic, there are no happy endings. In essence, happy endings in novels had somehow become intellectually suspect since the end of the Second World War.

Edwin Fisher faces a similar problem in Middleton’s novel, which is how to adapt to the possibility that his marriage has failed, or the possibility that he might reconcile, while maintaining his own sense of superiority as an intellectual. The problem for Edwin is that he is trapped between false dichotomies: between judgments about high and low culture; between utilitarian and ‘philosophical’ approaches to education; between religious culture and religious practice; between conflicting notions of what a relationship is. Having raised himself above the level of his working-class shop-keeping parents, Edwin’s self-conception has been polarised by his working-class origins and a sense of superiority afforded him by education. He not only has a teaching degree, but he now works at a university training teachers and directing philosophical arguments in the education field. It’s a role he finds difficult to separate from his identity. But now, after the death of their two-year-old son, Donald, Edwin’s inability to separate from the intellectual life against and the despairing emotional turbulence of Meg is the catalyst for separation, despite their continued strong desire for one another. Edwin has come to Bealthorpe seaside resort for a week while he considers his life and his possible future.

But Edwin’s choice of destination is, itself, interesting. Bealthorpe, Middleton’s fictional creation, is a rundown resort with a dilapidated fun park. Its overwhelming tone is morose rather than fun in Edwin’s eyes, yet the people he meets there – Terry and Sandra Smith, and Jack and Lena Hollies – believe they are having their best holiday ever. While Edwin can quote Keats (Nature is fine but human nature finer), and understand the intellectual precept, it is left to his newfound acquaintances to appreciate their experience of others’ company. Edwin, on the other hand, remains puzzled at his own presence at the resort among these half-stoned people without culture or subtlety. In his mind he is due a better class of holiday, which he most often associates with travel to the continent for culture and nature: Mountains, the high woods, fjords, glaciers, canyons, these he could afford, and yet he gawped over a hedge at a frilly curtained bow-window. Yet his choice of destination seems a somewhat unconscious atavistic decision. When his father-in-law asks him why he came to Bealthorpe he cannot explain it. But the reason seems evident to the reader. This was the kind of holiday Edwin spent with his working-class parents as a child. Edwin seems to be reaching back for something within himself.

This impulse is evident in his turn towards religion. Edwin counts himself as an atheist, but the book opens with him in a church ceremony, and he later tours a church in which he views the tomb of Little St. Hugh. However, Edwin’s reaction to the tomb remains intellectual rather than emotional. The resting place of the medieval child sends his mind back to the death of his own son, but it is to the downward-spiralling emotional state of his wife to which his mind wanders, for which he blames the breakdown of his marriage. And while he might blame science and doctors for failing his son, it is his sense of superiority over the church worshippers, congratulating themselves on their cultural initiative against his own appreciation of the architecture and the famous associations of the church, that his mind finally rests. While Edwin can admit a desire for faith, he remains faithless, and he fills the void created for his emotional and spiritual desires with culture: with the poetry of George Herbert, for instance, rather than its attendant spiritual associations.

It’s his sense of superiority that has defined his relationship with Meg. He meets Meg at a production of Ibsen’s A Doll’s House and from the start Edwin’s intellectual reaction to culture defines his attitude to her. Meg’s reaction to the play is formed in her gut. She questions Nora’s decision to leave Torvald and her three children as mere intellectual sophistry, bearing no human reality. Edwin, on the other hand wants to argue for the greatness of culture, of the great giants like Ibsen, Shakespeare and Sophocles whom he believes transcend mere human experience. Frustrated with her, he disparagingly thinks, It was like trying to run a private race against a cripple. She hobbled; he sprinted. It is little wonder that during the week he spends at Bealthorpe Edwin’s mind fixes upon the problem of how to turn his experiences into a play that will “encompass life” rather than the problems of reconciliation.

Edwin’s in-laws, David Vernon and his wife, Irene, just happen to be staying at the resort too. Whether this is pure coincidence or by design is never satisfactorily revealed, but David is a practical man and sets about trying to repair his daughter’s marriage, acting as a go-between and counsellor to effect a meeting and resolution between Edwin and Meg. David provides an interesting counterpoint to Edwin. Also, a self-confessed atheist, David rails at Edwin in arguments that echo his daughter’s, for his inability to see the worth in his marriage to Meg: You tongue words like a tom-cat at the cream. Haven’t you any concern with reality? Believing that Edwin has lost sight of the reality of the woman he fell in love with and married, David states, Human nature is my concern. David eschews faith in God or other intellectual constructs that deny the reality of human relationships, thereby denouncing David’s philosophising pretensions as no less contemptible than the religion he himself has rejected.

All this sounds rather heavy, but the book wears its concerns lightly enough. There are whole chapters which read more like a Carry-on film. David’s dalliances with Sandra Smith in particular, as well as Lena Hollies have some good comic moments, and the story conveys the sense of sexual tension and possibility afforded by this modest holiday. There are several minor characters with their own stories to tell, as well as the distracting presence of Kathleen Twining, a woman who has offered emotional support to Meg. As a whimsical aside, I found it amusing that her main role is to offer tea to people, which made me wonder how aware Middleton was in his choice of her name. Twinings, the tea company, the internet tells me, holds the world’s oldest continually-used logo. As I looked back over the novel, I began to see several scenes with tea – Meg throws a cup of tea at Edwin at one point, at another he burns his tongue on tea – and I began to accord the whole thing too much significance!

Nevertheless, Holiday is an accomplished novel about a couple’s struggle over the death of their son and the journey needed to return to one another. It’s what reminded me of that Fowles line I thought I remembered when I finished. But in Edwin’s case, finding happiness is not only an act of intelligence – he has that in abundance and it isn’t enough – but of finding the will to compassion. This book has a lot to offer and is highly recommended. 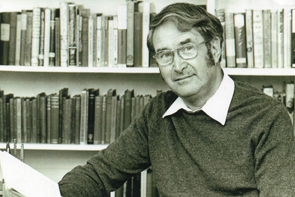 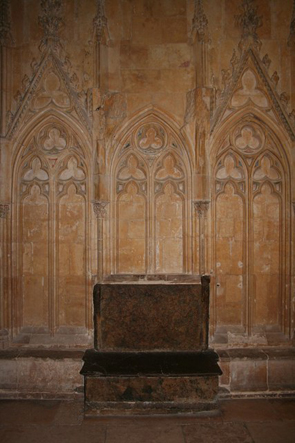 By Richard Croft, CC BY-SA 2.0, https://commons.wikimedia.org/w/index.php?curid=12300761
The tomb of Little St Hugh in Lincoln which Edwin Fisher visits in the novel. Edwin is reminded of the death of his son by the tomb, but is not significantly affected by the emotional association.
George Herbert, extract from The Temper (I) which Edwin Fisher recalls in the novel.