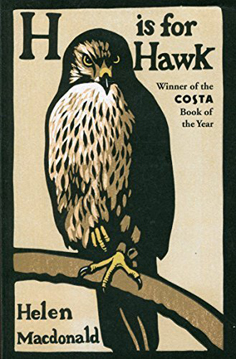 This is a beautifully written book on how the author dealt with her grief after the death of her father, and the second book I'd read recently on dealing with grief after the death of someone you love, although apart from the main theme, this is a very different book to Lincoln in the Bardo. It's part memoir, part nature study and part biographical (of T. H. White, author of The Once and Future King).

Helen has been interested in falconry almost her entire life, but has never trained the wildest of hawks, the goshawk. When her father dies suddenly from a heart attack, Helen feels a need to escape, and decides to train a young goshawk.

"Those books about people running to the wild to escape their grief and sorrow were part of a much older story, so old its shape is as unconscious and invisible as breathing."

White wrote a book (The Goshawk) in the 1930s, about his failed experience of raising a goshawk. His experiences in a way mirror MacDonald's, although she is better skilled at training a hawk. Like MacDonald, White was fleeing from society into a wild world. He had a brutal childhood, used by each of his parents against the other, and grew to become an unloved school teacher who worked hard to suppress both his homosexuality and his sadistic tendencies, before he retreated to a house in the woods to write and to train his goshawk. MacDonald reflects on White's life, his motives and his training of his goshawk and relates them to her own life. She also considers how his experiences with his hawk influenced his writing of The Once and Future King.

MacDonald ultimately realises that escaping from people was a bad idea, and that we need people and relationships in our lives. We need to have contact with other humans.

"I'd thought that to heal my great hurt, I should flee to the wild. It was what people did.

The nature books I'd read told me so. So many of them had been quests inspired by grief or sadness.

Now I knew this for what it was: a beguiling but dangerous lie. I was furious with myself and my own unconscious certainty that this was the cure I needed. Hands are for other human hands to hold. They should not be reserved exclusively as perches for hawks. And the wild is not a panacea for the human soul; too much in the air can corrode it to nothing."

Falconry isn't something I knew much about before reading this book, and while I can't claim to know much more about it now, through MacDonald's writing and the extracts from White's book, I've picked up a small idea of the dedication needed to train a hawk. MacDonald became fascinated by it as a child, read every book she could find on the subject (aided by her father who hunted through second-hand bookshops with her at weekends to track down more books by Victorian falconers), and became a falconer when she grew older. MacDonald's descriptions of Mabel (her goshawk) are one of the things that make this book so engrossing to read, such as the first time she sees Mabel:

"The hawk's wings, barred and beating, the sharp fingers of her dark-tipped primaries cutting the air, her feathers raised like the scattered quills of a fretful porpentine. Two enormous eyes. My heart jumps sideways. She is a conjuring trick. A reptile. A fallen angel. A griffon from the pages of an illuminated bestiary. Something bright and distant, like gold falling through water. A broken marionette of wings, legs, and light-splashed feathers."

Mabel is only 10 weeks old when MacDonald buys her, cage bred & raised. She is terrified in her new world, but is slowly tamed, and gradually becomes playful. MacDonald is initially surprised at the playfulness, as all the Victorian authorities on hawks describe goshawks as sulky or contrary or designed to aggravate their owners.

After a random conversation with the husband of a friend who tells her that the easy time she has had taming Mabel is due to them both being female, a kind of bond of sisterhood, she goes through all her books and discovers this to be a common thread - male falconers never consider any problems they have with goshawks to be anything to do with their own behaviour:

"It wasn't their fault. Like women, Goshawks were inexplicable. Sulky. Flighty and hysterical. Their moods were pathological. They were beyond all reason."

"For thousands of years hawks like her have been caught and trapped and brought into people's houses. But unlike other animals that have lived in such close proximity to man, they have never been domesticated. It made them a powerful symbol of wildness in myriad cultures, and a symbol, too, of things that needed to be mastered and tamed."

None of the authorities ever considered that goshawks might like to play. But Mabel can be playful, and there are lovely scenes in this book of Mabel batting at crumpled paper, or looking through rolled up paper.

Overall this was a wonderful book to read, highly recommended to everyone. 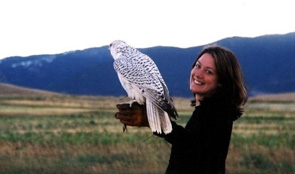