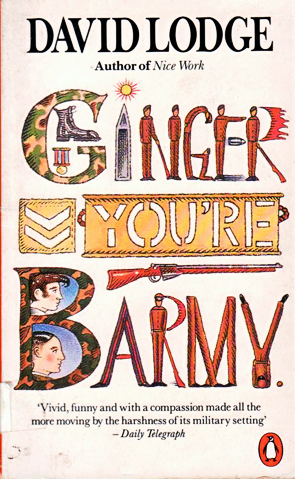 David Lodge’s career spans many decades, both as a professor of English and an English novelist. He began his first novel, The Picturegoers, while he was completing National Service. He completed his service in 1957 and the novel was published in 1960. His second novel, Ginger, You’re Barmy was released in 1962, based upon Lodge’s experience as part of the generation conscripted to National Service during peacetime. Peacetime National Service was a two-year stint in the army undertaken by young men in England between 1949 and 1963. Here, in Australia, registration for service was compulsory but not all were called upon. To determine those who would serve, a national ballot was held in which birthdays determined the outcome. In England, it was compulsory for all young men between the ages of 17 and 21 years old. Of course, the idea of National Service has historical antecedents thousands of years old (the Spartans come to mind) and versions of National Service have existed and continue to exist around the world. These days, National Service is one of those things called upon as a panacea by older conservative people against a perceived problem with young men in society. Prince Harry has called for its reintroduction. Actor Michael Caine has stated a belief that compulsory service would contribute to a sense of belonging for angry young men.

In Ginger You’re Barmy Jonathan Browne, Lodge’s protagonist, reads an editorial along these very lines: “National Service has done much to teach the younger generation independence, initiative, responsibility…” But Jonathan, who has suffered in the service for almost two years – his promising academic career has been in abeyance and lesser talents are taking opportunities he might have had – sees it differently: “I think it will be difficult to find a substitute which will inculcate bad habits, bad language, idleness, slothfulness, drunkenness, and the amenable philosophy of “I’m all right Jack” half so successfully as National Service.” Nevertheless, Jonathan’s experience in the army will have one of the more positive endings for those we follow in the book. We know from the very beginning – the book is bookended by a prologue and epilogue – that this nerdish bookworm will get the girl and he will return to a normal life. But for others there will be death, serious injury, even criminal convictions as a result of their response to the philosophies of army thinking. Some lives will be destroyed forever. If Jonathan can be said to have learned anything from his two years of service, it is that he definitely does not want to be in the army.

All this raises questions for a modern audience about this book. National Service in England ended a year after the book’s publication, but it was on its way out from 1957 when it was announced that those born after the 1 August 1939 would not need to serve. The last intake of conscripts occurred in 1960. By the time Ginger, You’re Barmy was published it was criticising an institution that was essentially ended, if not for the few men still serving out their time (Jonathan often compares service as a prison sentence). For that reason, Lodge’s novel is of a time and, it might be argued, written for an audience of that time. To demonstrate this, we can turn to Lodge’s attempts to introduce realism into his novel. To do this he attempted to capture a sense of the vernacular of the soldiers. In an author’s note for the original edition Lodge felt compelled to write:

The coarseness of soldiers’ speech and behaviour is a well-known fact, the representation of which I found necessary to my purpose in this novel. Readers likely to find such representation disturbing or distasteful are warned.

Yet Lodge was forced to accept a bowdlerised representation due to the standards of the time (The Lady Chatterley trial the year before gave publishers more freedom but its effects were too late for Lodge’s book). Instead of ‘fuck’ his coarse soldiers say ‘fugg’ (Percy, a sensitive young man is no less horrified by its use) and when it comes to describing the female pudenda, they don’t say anything except ‘c - - t’. This was clearly not the impact Lodge was hoping for, and he says so in an Afterword to the edition I read. So the question is raised, is this book a little too of its time for modern readers? And, does it still have something to offer?

I think it does.

First, David Lodge is simply a good story teller who would still appeal to a certain kind of person. I say this with kind intent, since I think I am of that ilk: a person who enjoyed academic life; someone who likes peace and quiet and their lives somewhat rational. Lodge went on to write other books that more immediately appealed to this type: Small World, Changing Places, Nice Work, The British Museum is Falling Down. All are based around the lives of academics told with distinctively ‘British’ humour. As for Jonathan Browne, he has just achieved a first class honours in English Literature. He aspires to an academic career. He is agnostic while his army friend, Mike ‘Ginger’ Brady, is an Irish Roman Catholic. Mike failed his degree but both men have an instinctive desire to rebel against the irrationality of army life and its torrent of abuses. For Jonathan, his higher education has taught him to think and question. But in the army he is confronted with a fierce demand for unquestioning obedience. The army, he finds, is not a meritocracy, as its rigid hierarchy of ranks suggest, but a kakistocracy, driven by favour, obedience, bullying and social rank. Officers may well be more intelligent, sometimes, but they are just as likely to be as stupid as the men they presume to lead.

It isn’t a stretch to see that Jonathan Browne is a surrogate for Lodge himself (his academic and army experience for a start, although Lodge clearly fictionalised his experience of the army). Lodge claims nothing interesting happened during his service, but he draws upon stories he has heard and his own understanding of storytelling. For instance, his use of a love triangle raises the interest level for readers in the novel, but it also helps to drive the themes. Mike is going out with Pauline, but it increasingly becomes obvious that they are not suited. Jonathan, meanwhile, becomes enamoured with Pauline and must struggle with the moral question of moving in on Mike’s girl. Yet the question of doing this and how much he reveals to Pauline becomes more complicated when Jonathan finds himself in a position where he is required to give evidence against Mike. Jonathan’s dilemma doesn’t only involve personal loyalty, but helps Lodge touch upon questions of class and religious affiliation within the story.

And if Science Fiction and Historical Fiction find relevance beyond their story telling in what they can reveal about contemporary attitudes and issues, then Lodge’s novel remains just as relevant. Our attitudes to war, the abuse of power, the treatment of minorities, sexism and religious divisions are all explored in the novel. When Jonathan observes that “The army … was the last surviving relic of feudalism in English society” we understand the paradox of preserving institutions and a government predicated upon freedom, by arbitrarily removing the freedom of a group of citizens based upon sex and age: that when Jonathan realises he suffers “women starvation … it was femininity I wanted in my life” we understand the dehumanising effects of the army on a generation of young men. On a personal level, Jonathan’s desire for Pauline distorts his friendship with Mike, just as a system that targets young men and places them together at such a young age is more likely to reinforce traditional sexist values.

Overall, however, this is just a good story with a fallible narrator whose motives readers will be interested to follow. The ending is worthy of Tom Sharpe – it seems to anticipate some of Sharpe’s excessive humorous violence in its portrayal – even if Lodge’s tone is far more serious and introspective by the time Jonathan looks back and attempts to explain his role in what happens, and how he ended up with Mike’s former girlfriend, Pauline. This book is still worth a look. 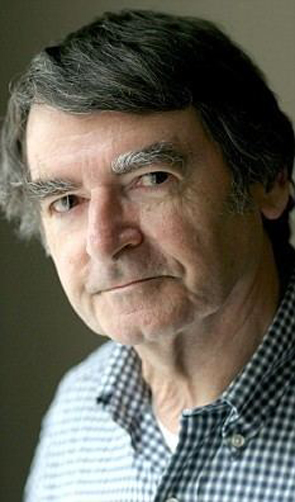 Next we had a medical examination. We sat around the walls of a warm, stuffy room which smelled of perspiration, wearing only jackets and trousers, waiting to be called in to the Medical Officer. Three soldiers in denims were making some adjustments to their lights. We sat, quiet and depressed, hoping perhaps that the medical might result in a last-minute reprieve, while the three soldiers conducted at the tops of their voices, as if oblivious of our presence, the most obscene conversation I had ever heard in my life. It might almost have been laid on by the authorities as an introduction course in Army language. It was obscene not only in its liberal and often ingenious use of the standard expletive that lingers like a persistent echo throughout any conversation in the Army, but also in its use of words whose obscenity, at that stage, I could only guess at, and in its content: sexual encounters experienced at the last weekend, or anticipated at the next, the merits and demerits (‘too messy’) of virgins as sexual prey, the dangers of intercourse with menstruating women (‘my mate said ‘is bollocks turned blue’) et cetera.