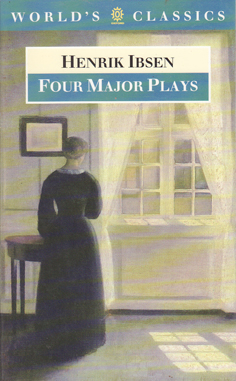 At the time of writing Henrik Ibsen’s Ghosts is playing in the Belvoir Theatre in Sydney. I read a review in the Sydney Morning Herald this week which prompted me to read the play. I was intrigued because the play’s artistic director linked the play’s issues with the current debate about gay marriage. If you’re reading this and are not from Australia you may not be aware that gay marriage is a political hot potato in Australia right not. Our former conservative prime minister, Tony Abbott, promised a plebiscite on the issue, not because he supports it, but as a means of killing the issue. His successor, Malcom Turnbull, a gay rights supporter, was bound to support the plebiscite for political reasons, and when our Senate would pass legislation for it, the government bypassed our Senate by using other powers to put forward a non-compulsory, non-binding postal vote. There is majority support for gay marriage in Australia, but much like our referendum for a republic in 1999, due to circumstances in the debate, the No camp may still win.

So, I was interested in what the director, Eamon Flack, saw in the play. The play was quite controversial when it was first performed. It was banned in England. It raises issues of adultery, potential incest, portrays a syphilitic character and raises questions about conventional morality.

Mrs Alving, who has endured a difficult marriage, plans to give her deceased husband’s money to support an orphanage. She does not want her son tainted. Her son, Oswald, returns home after the death, having been raised and lived away from the family since he was a boy. Pastor Manders also visits to offer guidance. His advice and opinions reflect typical patriarchal Christian values. He criticises Mrs Alving for having turned her husband out of the house early in the marriage, before taking him back, and then for sending their son away from the family home. By ‘home’ I mean a place for a family, where a man lives with his wife and children, Manders tells Mrs Alving. Even though Manders is castigating Mrs Alving for her perceived failings as a mother, the line is particularly resonant for Australians regarding the gay marriage debate, since a former prime minister, John Howard, changed the definition of marriage in 2004 to mean a union exclusively between a man and a woman.

However, Ibsen’s social criticism is broader than the current Australian context. After all, he isn’t actually addressing homosexuality at all, even if the play supports this commentary. Ibsen is interested in dissecting Manders’s point of view, representing conservative society which accepts only a certain point of view. He tells Mrs Alving, …it is not a wife’s place to sit in judgement on her husband. Rather, a wife must tread a path of duty, and in Mrs Alving case, she must be lead back to this path, since Just as you once denied your duty as a wife, you have since denied it as a mother.

The word ‘duty’ is repeatedly used by Manders – Ibsen does the same in The Master Builder – like an inviolable law. The opposite of a dutiful wife is a fallen woman, but when Mrs Alving suggests that her crime was to have married a fallen man, Manders is confused. Can such a thing be imagined? But Mrs Alving is not cowered by his social position or his language: I just wanted to say this: that when you pass judgement on my married life, you are simply taking it for granted that popular opinion is right.

This is also challenged through the character of Oswald, Mrs Alving’s son. Oswald has lived away from the family home for many years and has taken up the life of an artist, traditionally a lifestyle thought to be dissolute. Yet Oswald proves to be a far more moral and conservative man than his father. Ironically, he suffers from syphilis, supposedly passed on to him genetically by his father. The detail may not be medically accurate, but Oswald makes the moral point clear: the sins of the father are visited upon the children.

There is much more to the play than this – I haven’t even mentioned Regine and Jacob Engstrand or details about the orphanage – but the point is abundantly clear: while society promotes one privileged point of view about morality, morality is more complex and individual lives do not always fit a simple moral template.

As always, Ibsen builds details about his characters with great skill, and the audience’s perceptions are constantly formed and challenged as the play progresses. If I had one criticism, I thought the ending a bit melodramatic. Perhaps my opinion would change if I saw a good production. However, I thought this was a powerful play, which should still resonate for modern audiences, despite its nineteenth century setting. 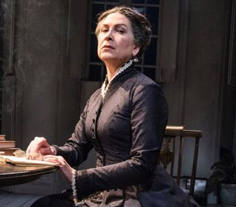 Pamela Rabe as Mrs Alving in the Belvoir Theatre production. Click on the image to read the Sydney Morning Herald review