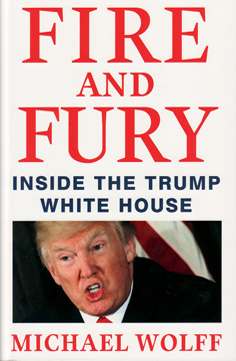 Never in the history of the USA has a president been so controversial and so divided his own people. Not only that, but there has never been the level of interest about the President in other countries, such as Australia. So, when this book was nearing completion, and the President himself tried to stop its publication, I was one of the first to pre-order it and get one of the first copies to hit the bookshops in Australia.

Now, I already had my firm opinions of Donald J Trump. In the lead up to the elections I had watched the weekly series, The Circus, following the whole process, from preliminaries through to election night. At the time there was general disbelief that Trump had won – apparently, Trump himself never believed he would win, according to Wolff. Wolff constantly refers to conversations which confirm this.

Despite the media relay of information about the operations of White House staffers, for many the intricacies of the comings and goings and the constant allies and adversaries, were not greatly known. The revolving door of staff, which has become commonplace since Trump came to power, has certainly continued. In fact, only today, two more high profile people are threatening to quit.

How a government with such a dysfunctional and divided 'team' could work towards any agreement, seems impossible. Wolfe highlights the situation between the Jarvanka (Ivanka and Jarred Kushner) side and that of Bannon, who continuously disagreed about virtually everything, to the point that they could barely be together in the same room. The constant backbiting and undermining by both sides became unbearable, not to mention other staffers who were lesser known, who played a part in the politics of situations in the White House.

Wolfe looks at personalities, the media and of course, Russia, bringing out much more than is possible in the weekly news bulletins.

This book confirmed for me the maniacal and egotistical personality of Trump, a man who cannot even bear to have generals give him advice, because he believes himself not only to be smarter and more superior, but his level of one-up-manship is always at forefront.

One of the ongoing issues that White House advisors have had to contend with has been Trump's use of Twitter. And yet a staffer reported The problem isn't Twitter, it's Hope (Hicks - his media facilitator). That almost repeated this week's coverage of the Florida school shooting: …it's not the guns, but people who are the problem. Delusional ...

For me, the book uncovered a deep-seated consensus that many of the staff and indeed, even Trump's own family, believe he has no sense, no understanding of politics and that many of his comments are in fact incoherent. In addition, decisions are made on the basis of who Trump spoke to last, as noted by one staffer, and making decisions based on him wanting to be liked.

One revelation spoke of Ivanka setting herself up to be the first female President! This, despite Trump also revealing how stupid he believes his daughter to be.

I found the details of Wolfe's book impossible not to believe, given the access Wolff had to the White House and its staff. Obviously, it rocked the President to the core, and I can see why he tried to have it suppressed.

Whether or not you are a Trump supporter, this book is certainly worth the read. It is not a flattering account by any means, but raises interesting points for consideration. For me it confirmed my beliefs, and made me even more concerned for future of the USA.

This is a brilliantly written piece to go down, no doubt, as one of many critical appraisals of the Trump presidency. Thoroughly recommended reading, whether you are politically minded or not.

Trump is an easy target for satirist. His tweeting and self aggrandisement are seen as un-Presidential and counterproductive by many.