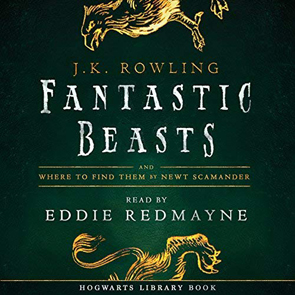 Fantastic Beasts and Where To Find Them
J.K.Rowling

Just to be clear – this is not the screenplay for the recent movie starring Eddie Redmayne, but a recording of the original book which was ultimately the basis for the movie. Fantastic Beasts was originally written by Rowling in 2001 to raise money for the Comic Relief Charity. It is a small book, only 129 pages, and purports to be a reprint of one of Harry Potter’s textbooks used at Hogwarts. It came out between the publication of Goblet of Fire (2000) and Order of the Phoenix (2003). This version of the book contained scribbled notes from Harry, Ron and Hermione, offering their comments on some of the beasts included, such as the Acromantula.

When the first Fantastic Beasts movie was released in 2016, an updated edition of this book was written, with additional creatures (from the US), and also included beautifully drawn illustrations by Johnny Duddle and Tomislav Tomic, but unfortunately without the scribbled comments by Harry, Ron and Hermione. It was a companion piece to the other illustrated Harry Potter books which are being slowly released. Like the original book, proceeds from this edition went to charity, this time to Lumos, as well as Comic Relief.

I have been buying the illustrated books for one of my daughters. It’s become a tradition for us that she finds a new one under the Christmas tree each year. So I’ve looked over the 2017 edition, admired the lovely illustrations but never bothered to read it. After all, I’d already read the original book when it first came out.

I’ve recently discovered that I can borrow audiobooks online from my local library and have been making use of the service. I downloaded the audiobook this week, and listened to it over a few days in my car. I found that having this book read to me by Eddie Redmayne was a fabulous experience, and added a lot to my enjoyment of it.

Part of the enjoyment is just hearing Eddie Redmayne’s voice and picturing that Newt Scamander was reading his personal copy of the book to me. But apart from that, this audiobook has sound effects for every single creature. This really adds to the experience. Pottermore have put a lot of effort into creating this audiobook.

The book is basically an alphabetical anthology of a collection of beasts, describing each creature’s physical appearance, main habitat and behaviours, as well as a danger rating from the Ministry of Magic. The original book included 75 creatures, with 6 more added to the new edition, bringing the total up to 81. The introductions to the book – there are two, one from the original edition, and a new one for the new edition – add depth to the book, with descriptions of the history of wizards attempts to classify creatures as either beast or being. The new introduction hints at the first Fantastic Beasts movie, and at further revelations which will come as more papers are unclassified by the Ministry. At the time I write this, the second movie has been released. The third is scheduled for release in 2020, and two more are planned, for a five-movie series.

I’d recommend this version of the book to any Harry Potter fans who want to enjoy immersing themselves a little in the fantasy world Rowling has created. 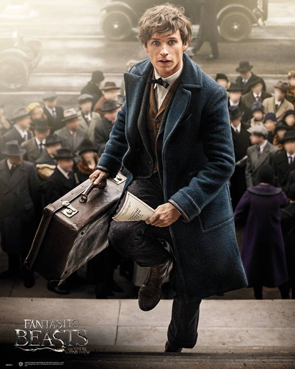