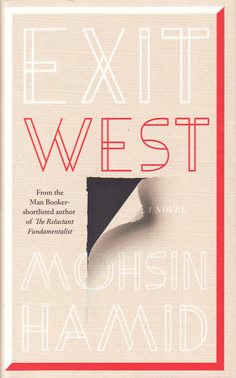 There is a dreamlike quality to Exit West in its simple third person narrative style and the way it takes a contemporary world crisis and gives it a timeless, universal quality. In short, there is an allegorical feel to the book. The country from which Saeed and Nadia escape is never named. The city they live in is a modern city with a Middle Eastern feel. Saeed works for an advertising firm, Nadia in insurance. Saeed lives with his mother and father, Nadia alone. Saeed has been raised with traditional religious values and sees prayer as important to his sense of shared humanity. Nadia has rejected her parents’ world and has established her own life. She wears dark clothes that cover her, much the same as many Muslim women might, but she does it “So men don’t fuck with me”, as she tells Saeed, and not for religious or conservative reasons.

At the outset, it is easy to assume what this story will be about. Saeed and Nadia will fall in love but their differences and families will frustrate their desires. Perhaps they will be like Romeo and Juliet. They certainly form a relationship, but that’s as much as the story conforms to our expectations. The rest of the novel is more informed by the refugee crisis that has troubled the modern world. The flight across Europe of many refugees in the last few years, especially from the Syrian crisis, and the social and political strains that that has caused in Europe seem to be the subject of the book.

Mohsin Hamid’s novel is speculative. Central to the story are doors which mysteriously begin to appear in Saeed and Nadia’s city and across the world. They are like science fiction portals to faraway places, like the wardrobe in C.S.Lewis’s book. As a civil war takes hold of Saeed and Nadia’s city, they are eventually forced to flee to safety through one of these doors. Of course, the doors contribute to the dreamlike quality of the book, adding a touch of Magic Realism to this allegorical story. But the speculative nature of the story relies upon the doors. The doors are not only gateways for the flow of refugees across the world, and in turn, for the flow of some westerners the other way, but represent a challenge to the idea of race, of culture and of nation; concepts that ideologically divide humanity. This idea has been implicitly understood by Australian politicians for many years. John Howard’s mantra that we, as a nation, would decide who comes here, to the current administration’s argument that strong borders are necessary for an effective immigration program, shows an understanding that the concept of identity is mutable. What the book attempts to do, it seems to me, is explore what would happen if governments suddenly couldn’t control their own borders. What if geography were no longer a barrier? What if you couldn’t control the flow of people all over the world? In short, how does that change society and what sort of humanity would emerge from that situation? What sense of identity and sense of belonging?

I thought the book was narratively most engaging in its first half. Mohsin’s story of the nascent relationship and the rapidly disintegrating political and military circumstances in the city was entertaining and believable. It felt real to someone like me, only familiar with these situations from the news. However, I found that the second half of the story flagged a bit. After Nadia and Saeed escape through the door I began to feel that there was a predictability about the narrative and that its examples of refugees making a go of it was a little preachy. Yet the story had the capacity to change again. After all, the book is philosophical, more concerned with the nature of humanity, itself, rather than refugees, specifically. Throughout the story, Hamid uses short vignettes of anonymous people also affected by this changing world. One man about to commit suicide escapes through a door, instead. Two men find love when this world without borders brings them together. A woman who has lived her whole life in one place watches it changes culturally around her and becomes a migrant in time, not in place. That’s the strength of the story. It is time, not geography, that defines us. Life’s impermanence binds us as humans, while political boundaries divide.

There is some unevenness to this novel, but in the end, I was impressed by its philosophical strength. The book has been longlisted for the Man Booker Prize this year. I don’t think it’s strong enough to win, but it is certainly a relevant book for our times and well worth a read.