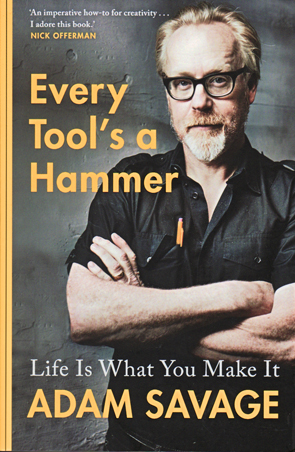 Every Tool's a Hammer
Adam Savage

Life is What You Make It

Every Tool is a Hammer is essentially Adam Savage’s advice about how to organise yourself and work creatively, based on his years of experience as a model and props maker, his tenure at ILM, the Lucas Film special effects studio, as well as his fourteen years working with Jamie Hyneman on the popular television show, Mythbusters.

What this book isn’t, despite some allusions to personal stories that pepper the text, is an autobiography, at least not in the traditional sense. Savage tells us about the support his parents gave him when he was starting out, about his first and only confrontation with a bully over a refrigerator box he was dragging home as a child, and even an early, devastating failure to make a set for a student film which destroyed a friendship. Okay, it is a little bit autobiographical, but that’s not the thrust of most of the book. When Savage introduces this material it’s always in the service of teaching us something. He is, by his own admission, a sharer, and what he is attempting to do is pass on his experience to another generation of creative people, whether they be model makers like himself, writers or any other creative person.

Whether or not that message is useful to those in its target audience will largely depend on the experience and established working practices its readers have. Every Tool is a Hammer is a product of Savage’s working style: both ordered and scattered. If visual cacophony is the philosophy of my shop space, of where I work, then first-order retrievability is the philosophy of my process, of how I work, he tells us when describing the layout of his working space. By visual cacophony he means that he needs to be able to see tools rather than have them neatly packed away, so he has devised methods of ordering his tools around his shop. By first-order retrievability he means that his tools need to be easily accessible. For instance, if he finds he needs to use hammers in different areas of his workshop he will have multiple hammers, each placed in those areas, so that he doesn’t waste time walking back and forth to retrieve them.

There is a certain level of consistency between Savage’s working style and Savage’s writing. The book is ordered into topics concerning the organisation of work. He begins with the basics, like how to organise time – so how to make and use lists, for instance, or how to work methodically so as not to waste time – to the use of drawing as a creative tool and the creative importance (and his love) of deadlines.

A deadline shouldn’t feel like a vise slowly crushing your head, it should feel like a sieve through which only the essential elements get pushed by the pressure of time, leaving the unnecessary bits behind.

I found all Savage’s explanations to be clear and common sense, possibly because they are mostly in accord with my own style of working. I think the first half of the book was most relevant to anyone who could do with a little inspiration or motivation to get themselves organised. The first half of the book is really like one of those how-to books that I mostly despise – 10 Habits of…, How to make a Million Dollars… – although it is leavened by Savage’s personal approach and the interest his readers will no doubt have in him as a presenter of Mythbusters. He does discuss some of his experience of working on the show, but it is mostly focussed on his working style with Jamie Hyneman and their work shop.

The second half of the book is more specific to those with Savage’s interests, or at least those who work practically. It deals with the organisation of his shop, his tools and materials as well as his routines. This might sound a little dull, and the truth is, it is a bit repetitive. Savage’s idea of first-order retrievability seems applicable to his writing, in which he returns to ideas he has already discussed throughout his book. This is saved to some degree by Savage’s ability to express important practices as quirky aphorisms. The title of the book is one of these aphorisms which he specifically addresses twice. The first time it refers to his belief in first-order retrievability. Jamie Hyneman tended to organise his large workshop with all tools of a certain type in one place. This meant Savage was either forced to walk back and forth to retrieve tools if they were in another part of the shop, or else every tool in my immediate vicinity became a hammer. He also uses the phrase to express a belief in adaptability and innovation: that a creator needs to be able to look beyond the basic purposes for which something is created to see new possibilities: until you learn to see what tools can do beyond their stated purpose, you can’t quite be a maker.

The book is most interesting when Savage’s enthusiasm for his creations is allowed to take wing. Savage is an ardent cosplay enthusiast, so he has several anecdotes about costumes he has made – spacesuits from Alien and 2001: A Space Odyssey – as well as the replication of iconic props from movies: Rick Deckard’s gun from Blade Runner or Major Kong’s survival pack that features in Doctor Strangelove, for instance. These anecdotes are helped by black and white photos of his creations, which also illustrate their various iterations, and the book is illustrated throughout with drawings and photographs that give a sense of Savage’s creative output, but more importantly, his work practices.

I think one of the most important lessons he imparts that is transferable to any creative discipline is the idea of iteration: that the creative process is not one inspired step, but many steps, false-steps, reconsiderations, experimentations, sought advice, and even compromise, until something is created. But the important thing is, by doing all this, you learn new skills which will help you refine the processes and skills you bring to your next creative project.

This may seem obvious enough. But Savage’s tone is encouraging, and the fact that this comes from a fallible creator who speaks from long experience makes it a palatable and relatable message, especially for younger people. I’ve witnessed the paralysis of students tasked with creative writing, who fear failure: not a grade but their own dread of not ‘getting it right’ the first time. I guess the question is, would I recommend this book to someone else? The fact is, some might find themselves skimming over large sections of this book, since Savage does labour his points sometimes, but I have already recommended it to my son who works creatively and could benefit from some of the organisational advice Savage offers. If, on the other hand, you wanted to know more about Adam Savage’s life – an autobiography of the traditional kind – you might be disappointed, unless you accept that his work is largely his life. 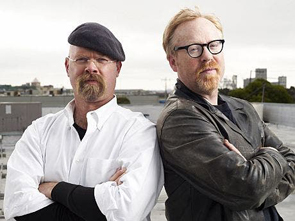 Adam Savage, right, with his co-host Jamie Hyneman from Mythbusters

- from the opening paragraph of Every Tool’s a Hammer