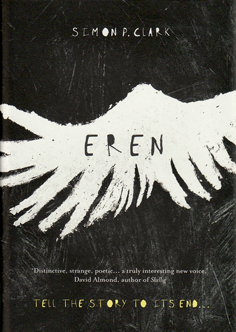 I did something I don’t normally do when I finished reading this book: I went to the Internet to see what others had said about it. I guess I did it because I had a level of ambivalence about the story. I found that some people thought the book was revelatory. Others thought it was confusing or boring; even disappointing. This made me wonder whether a book will sometimes be considered a revelation because its ending attempts an oooohhh!!! moment – like a magician’s trick accompanied by a giant puff of smoke, with nothing really to reveal; some see the smoke and think they have been entertained, while others look past the smoke and see that the trick didn’t work. This is what I began to suspect.

My ambivalence arose because there was much to like about the story, but at the heart of it – that sense of a story you have in your head when you look back and see the point of it – was that the book failed to deliver.

What was good about this story? It had an intriguing opening. Eren is there from the first lines and he is a mysterious, somewhat tantalising and, at times, threatening character. The story is genuinely well written, too. And the book, at least my copy of it, is beautifully presented with intriguing illustrations which complement the story well and show respect to the importance of stories to this novel.

Oli, a twelve-year-old boy, leaves London with his mother to stay with relatives in the country. It is clear from the beginning that the family is facing a crisis which the adults are determined to protect him from. Oli is bored in the country and resents the secrecy and the need to stay with his uncle and aunt. His feelings are somewhat alleviated after he befriends Emma and Takeru. The stories of the family crisis and Oli’s new friendships run parallel with Oli’s secret discovery of Eren in the attic of the house, an ancient creature who feeds vampirically off stories. Eren is quite creepy, secretly grooming Oli, encouraging stories from him, promising fun, and all the while becoming more demanding. It only strikes me, now, as I write, that Eren is often described as being like a spider, an epithet often used for paedophiles.

This is all good as narratives go, but what is driving this aspect of the story is the family mystery? What has happened to Oli’s father and why have they moved to the country without him? I think the interest in this aspect of the story slowly diminishes as speculation firms into known fact. For this reason, I was interested in the way the story of Eren meshed with Oli’s more mundane reality and this was going to be resolved in the story’s denouement. I think this is where the story failed. Despite the wonderful writing and the interesting ideas in the book I felt, as an adult reader, that the author never found a satisfactory way to do this beyond what one might consider a cheap magician’s trick to wrap things up. Given that Oli faces real problems – this is a book that forces its protagonist to deal with the problems of the adult world – I expected that the figure of Eren might have relevance beyond a fantastical exegesis on storytelling. Eren discusses the function and meaning of stories throughout the novel and several stories are told, both to Eren by Oli and by Emma, who appears to have a far greater talent for it than Oli, no matter what Eren assures Oli to the contrary.

There are several possibilities, it seems. For instance, Eren can be read as is a metaphor for the press, as well as an aspect of Oli’s own mind, struggling to come to terms with his family’s situation. However, the problem for me in the first instance is that the press metaphor devalues storytelling in this context, and in the second instance, the story makes a nothing of Oli’s psychological possibilities for the narrative at the end. I imagine someone might fiercely defend the book and tell me I am wrong about this – that the ending encompasses this potential – but there is no resolution to the problems Oli faces, merely an escape or, at best, an open ending; this coming from a book that demands Tell the story to its end, although in an equally uncertain question, Oli is asked, And how would you know when that is? On top of all this, there is also the potential to read Eren as a father figure. What is a child reading this story meant to understand about that?

Simon Clark states in his introductory remarks that, This is a story about storytelling and asks the questions of its reader, What if stories were powerful? What if stories were dangerous? He goes some way in exploring this idea. Certainly, the stories Emma tells about a cat and stars, and about a man who keeps words in jars, are intriguing and demonstrate the power a story holds over its listener. In fact, I thought these short vignettes were the most powerful part of the novel, more easily controlled by its author and more interesting than the main story. But the story of the man who holds words in glass jars is never completed, and which is what the book felt like, overall. Simon Clark both advocates the need to experience stories to the end, but also acknowledges the impossibility of doing this. When Eren reveals to Oli a vision of a first story told around camp fire thousands of years before writing, a story that will be added to and changed in its various retellings over the many centuries, one immediately sees the impossibility of claiming a definitive version of any story.

But it strikes me that this is all a bit esoteric for a book written for children. It seems to me that a child reading this will want to know what happens to Oli and Eren, and this is where I think the ending is problematic. The potential links between Oli’s mundane world and the world of Eren remain ambiguous, and the power of stories remains problematic. How is Oli empowered? How are his real-life problems reflected and dealt with through the power of storytelling? It appears to me that these things do not happen. My feeling is that the story moves on without him, as though its author is himself enamoured of an act of imagination that he cannot make it work.

Simon Clark claims in his introduction that Eren, like all stories, grew in the telling. It’s a phrase that leaps out at any Tolkien fan, since Tolkien used it to describe the way The Lord of the Rings took shape under his pen. Clark acknowledges his debt for the phrase. It seems a little pretentious to me to make the comparison between his own imaginative creation and Tolkien’s, but I also thought it encompassed a truth. The book feels like it grew from an untethered imaginative wandering, with side paths that, as I have said, are sometimes richer than the story’s main narrative direction. But it feels like a story that never quite found its way home. There’s a lot of good stuff here, but how it hangs together is sometimes a problem. I also felt like it appealed more to adults, except that its ending was a cop-out for which kids would be probably more forgiving. Ultimately, this book works quite well on several levels, but it felt to me like it needed a more disciplined hand to unify its disparate parts.

Everything is hazy. Nothing seems important. Where's Eren gone? I've lost him. I turn my head around, looking for him, calling out his ... he's standing right in front of me, eyes flashing like steel blades in the dark.

He looks bored, almost, and picks at his teeth with a long, sharp finger. 'Aye, well, there's nothing doing being all company. You can't really do much more now.'

He's right, I know - more than I've known anything else. I try to cry, to kneel down and hide my head, but I just stare at him.

'They're just ... no, they're not just anything, are they? They're everything.'

I manage a dry laugh. 'A beginning?' I ask. I've started to understand his games, at least. He's singing to himself, over in the corner, a song I can hear but a song not for me.

'A tale I know, de dum, de dum, I know of many a tale! To catch a boy, a cunning ploy, and one that never does fail!'

I wonder how long I've been here. I really, really don't know.

From Chapter 15 of Eren