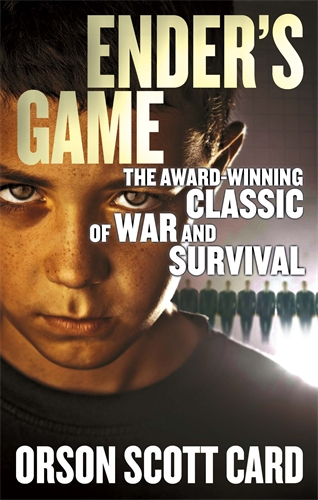 I enjoyed this book. As a simple story it is fast paced, with a (mostly) likeable hero.

On the surface it is a simple story of a young boy with a brilliant strategic mind being trained to see if he will one day be suitable to lead the Earth’s army against the Buggers, an alien race with whom the Earth has had two major battles in the past. A third battle is feared, and the military is desperately trying to produce the commanders they need before the Buggers return. Ender progresses rapidly through battle-school, developing skills at an incredible rate and being promoted to leadership positions at a very early age. In between, he faces resentment and bullying from other students, and has to develop strategies to survive. And that surface story has enough action & excitement to make it a quick and enjoyable read. The ending was a real ‘didn’t see that coming’ moment for me.

But the book also explores a lot of interesting issues, and leaves you with plenty of things to think about. Questions on the ethics of breeding children to produce potential weapons or military leaders. The ethics of manipulating and psychologically abusing children for the supposed good of all mankind. There doesn’t seem to be much value placed on families throughout the book. Families are useful tools for breeding the children needed by the military and for being used to manipulate the children at the battle school, such as the repeated use of Ender’s love for his sister Valentine to get him to make the decisions they want him to make. Ender’s mother & father don’t get any choice in allowing their six year old child to be taken to battle school – they were given permission to breed him, now he belongs to the military until they no longer want him.

There is also the question on the morality of the war the boys are being prepared for. The Buggers were comprehensively beaten in the second war. There is a suggestion by one of the other boys that the Bugger menace is a myth used by the military to retain their power, and that without the unifying threat of the Buggers, there would be massive civil wars on Earth. However we find out from one of the conversations that each chapter starts with that the boys are not being prepared for another attack by the Buggers, but for an ultimate attack on the Buggers’ homeworld, despite there being no direct threat in many years.

I did wonder about the general world this book is set in. In many ways the military have immense power. There are strict controls over breeding to combat over-population, similar to the one child policy in China (in this world a family is normally permitted only two children), but unlike China, citizens on Earth seem to have no restrictions on their access to information (such as Ender’s brother Peter being able to access information on troop movements in Russia) or on their participation in political debates on internet forums (which sound fairly similar to the usernet groups I used to chat on in the late 80s/early 90s). So tightly controlled in some ways, but relatively free of controls in others.

One big problem I have with this book is the attitude to women. Ender is told that there are mostly boys at the battle school, only a few girls get in. “They don’t often pass the tests to get in. Too many centuries of evolution are working against them”. What tests? The academic tests or the psychological tests to determine if you’re ruthless enough? Females have been in the military for some time in the US, as fighters. Was this book written before that started? It’s a bit of an old fashioned stereotype – boys are all bloodthirsty warmongers & girls are sweet little homebodies. This is probably a prejudice of the author, not an accurate prediction of what future fighting forces will be like.