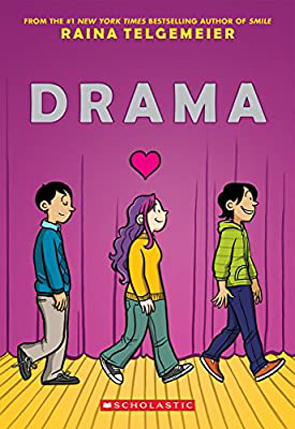 It's Banned Books Week in the U.S., so I thought I'd start the week with a banned book. Drama first made it to the U.S. Office for Intellectual Freedom Top 10 Most Challenged Books list in 2014 and seems to have remained there ever since. In 2016 it made it to second place, but it's been dropping down the list a little each year, only coming in at eighth place in 2019. It looks to be targeted to Middle Grade readers: at least, it's set in a Middle Grade school. It's centred on Callie, a Grade 7 student who loves the theatre and who is the stage designer for the school's annual musical production. The rest of the characters are Grade 7 and Grade 8 students who are also involved in the musical. I think that would make them around 13-14 years old.

Some reasons given for the challenges against the book include, “its LGBTQIA+ content and for concerns that it goes against “family values/morals”; “challenged because it includes LGBT characters, was deemed sexually explicit, and was considered to have an offensive political viewpoint” and that it was “sexually explicit”. According to Wikipedia, it's been banned from a number of schools in Texas.

Drama does have a few chaste kisses in it, but I don't think I'd classify it as “sexually explicit”, even for a middle school audience. Two of the kisses are heterosexual couples, the other is a kiss between two males, but in context, it is a stage kiss between two characters who are meant to be a male/female couple, but the female lead was not available for the performance and a male took her place on stage at the last minute. I presume it is this kiss that gets the “sexually explicit” tag. The book does have LGBT characters, and these characters are accepted for who they are in the story, so I guess that may be one of the main problems for people who challenged this book.

To me, the book contained a sweet story, and the romance level in it seemed appropriate for the ages of the characters. Various characters had crushes on other characters, there was some dating and some breaking up and there are a couple of kisses. That's about as far as it goes. I don't think there's anything in it that would be inappropriate for the target audience. But I'm well aware that people who have no problem at all with asking pre-schoolers if they have a girl/boy-friend yet, or who they plan to marry, can get upset if there is the slightest hint of homosexuality depicted in a book.

If I was planning on challenging this book, it would only be for what seemed to me to be the unrealistic theatre production standards. Do middle school productions really have the budget and production standards that this school appears to have? But really, I can just accept that they do and move on with the story. It's simple but engaging: the kids are staging a musical and our main characters want it to be perfect. The story mainly centres around the stage crew kids, but we get to meet some of the actors as well. Callie has highly ambitious plans for her set, including an onstage cannon explosion – she initially wanted two but had to restrict herself to just one – and is determined to pull it off. She also seems to have a number of crushes, starting with a baseball player (older brother to one of her stage crew friends and a real jerk) then moving on to two brothers in turn. One (one of the actors) comes out as gay to her early on, and she transfers her affections to his twin (equally talented at singing but who is too shy to audition and joins the stage crew). He also comes out as gay later on, so really, she doesn't have a lot of success with guys. But she does have success with her set design and manages to pull off her ambitious designs. There are some problems with the staging of the show, these create part of the drama for the story, but the kids manage to cope with them all and pull off a great show.

The graphics in this book are fun and make effective use of colour, such as the changes shown below as Callie waits for a boy to return her text: 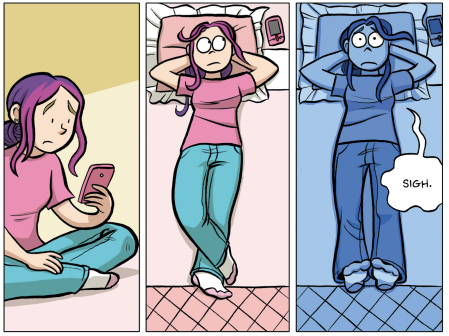 Overall, this was a fun read. Nothing challenging or unusual about it, just a light hearted, enjoyable story about the angst of unrequited crushes and about good times with friends working on a project they love. 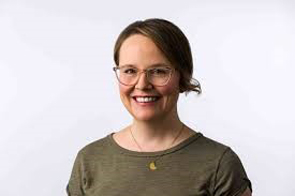