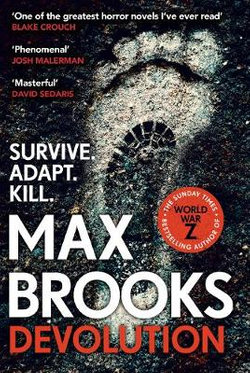 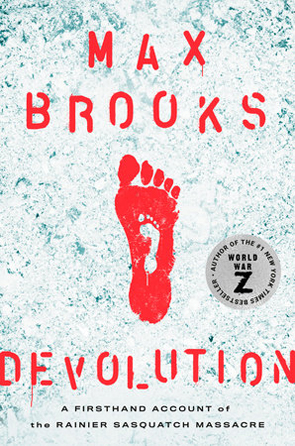 A First Hand Account of the Rainier Sasquatch Massacre

At least in my copy of Max Brooks’ latest novel, Devolution, there is no mention on the cover, title page or anywhere else of the subtitle: A First Hand Account of the Rainier Sasquatch Massacre. Interested in the way the book was being marketed, I searched for copies of the American cover online and sure enough, there was the subtitle on the cover. Which is why I’ve included both covers in this review.

‘Devolution’ is an odd word, especially for a Big Foot story. Ordinarily, it might refer to the delegation of power from one level of government to a lower level of government. Or it may simply refer to things developing into a worse state: ‘devolving’. But the word also sounds like ‘evolution’ and ‘revolution’, connected to science and politics, which I think may account for the prominent subtitle on the American copy. ‘Sasquatch’ is a term originating in America, and the dramatization of the subject matter would likely appeal to American audiences.

Nevertheless, I saw that subtitle online and that’s what prompted my initial interest in the book, aside from the author.

Max Brooks’ novels are aimed at dramatizing the complexities of possible threats to humanity. While full of drama and action, his narratives are based upon research and available information. In his novel, World War Z, Brooks used the popularity of zombies in our culture to address the problems humanity might face from a global pandemic – at the time he was specifically thinking of the SARS virus – from multiple points of view. It was an attempt to consider how ready the world really was for something as yet unknown, and how it might impact us. The movie, starring Brad Pitt, transformed Brooks’ novel (which would have been better filmed as a pseudo-documentary, I think) into a standard hero flick. In many American movies there is always ‘one man’, as the theatrical trailers assure us, who will turn wrong to right. While a fine zombie movie, World War Z was a disappointing adaptation of that book. In a Guardian article, Brooks says, I thought it was a really cool movie that happened to have the same title of a book I once wrote.

The word ‘devolution’, as used by Brooks here, might refer to two things. One idea follows the first definition above. Rainier, an eco-community established in the deep woods near Mount Rainier, is cut off from the rest of the world after a volcanic eruption. Its reliance on modern technology and delivery systems makes its residence vulnerable. Slowly, they come to the realisation that the set of circumstances created by the eruption may leave them stranded for months with little food, much like residents of New Orleans were left stranded after Katrina. When a group of Sasquatch happen upon their village, themselves starving due to the circumstances of the eruption, the people of Greenloop become their prey. The transfer of power from humans to the sasquatch tribe symbolises the fragility of human civilisation and the systems upon which it relies.

‘Devolution’ also has a darker connotation: Survive. Adapt. Kill, as stated on my cover. The three words fairly much summarise the plot. But they also hint at the word’s second meaning, as stated above. With the protections of civilisation stripped away, how much of our humanity remains after a fight for survival? Brooks’ characters find their fine feelings about the natural world challenged by this incident.

Those poor bastards didn’t want a rural life. They expected an urban life in a rural setting. They tried to adapt their environment instead of adapting to it.
Devolution, page 62

I thought this to be the most powerful aspect of this book, and most reminiscent of Brooks’ World War Z. Brooks sets out to test the basis of civilisation and our humanity. Greenloop exists as a kind of Edenic Utopia prior to the eruption, its people mostly nature lovers who wish to live apart from the ills of the city. But Brooks’ narrative quickly deconstructs two hundred years of the romanticising of the natural world, from Rousseau on:

All these overeducated, isolated city dwellers who idealize the natural world […] Nature is pure. Nature is real. Connecting with nature brings out the best in you. That’s what I hear from the poor dumb dipshits who come out here every year in their new REI outfits, never having felt dirt under their feet, just aching to lose themselves in the Garden of Eden. And then a few days later we find them crawling through the muck, half-starved, dehydrated, nursing some gangrenous wound.

Hummingbirds that seem to be kissing are later understood to be fighting to the death. Yvette, a member of the Greenloop community, introduces Kate Holland, the novel’s main narrator, to the concept of Oma, Guardian of the Wilderness. Yvette explains that Oma is a gentle giant which has been perverted into civilisation’s understanding of Big Foot, a dumb brute, rather than a creature that embodies tenderness and strength with a sweet, cleansing breath. Yvette’s romanticising is typical of civilisation’s desire for an atavistic mother (Feel her energy, her protection. Feel her soft, warm arms around you) The reality is much different: a visceral, gut-turning smell.

The reality of nature behind the sweet veneer imposed by civilisation is a world of conflict and violence. Sequestered in high-tech homes with regular food deliveries by drone and driverless car, the humans of Greenloop neither need to understand the environment they inhabit, nor prepare for its darker challenges.

For those who loved World War Z for its thought-provoking speculation, the first half of Devolution will be most appealing. For those more interested in action and suspense, the first half might drag until the appearance of the Sasquatch tribe. Nevertheless, I still found the narrative dragging in the first half. Part of the weakness of this book in comparison to its predecessor is that it is more firmly tied to traditional narrative. The novel is presented as a found text, based upon a therapy journal left behind by Kate Holland, along with other voices – interviews, reports and the like – as in World War Z. But the book’s speculative power is limited by the parochial perspective of its main narrator and the story’s limitation to the Greenloop community. And the necessary attempts to establish characters in the opening chapters and set up character arcs for minor characters detract from the appeal of Brooks’ speculative strengths.

Nevertheless, Brooks’ story is based upon real scientific speculation – the theory that Gigantopithecus, an extinct species of ape from China, might have migrated to America, for instance – along with other recorded encounters with Sasquatch. Brooks also draws upon documented cases of encounters with other wildlife to lend his story the possibility of reality. And there’s even interesting trivia along the way. President Theodore Roosevelt may have described a Big Foot encounter, for instance, and a few extracts from his writing appear as chapter epigraphs. This, along with speculations as to the rise of Big Foot culture and conspiracy theories all make this a compelling book, despite it being a weaker offering from a talented writer and original thinker. 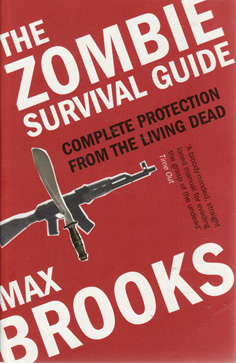 The Patterson-Gimlin film - 1967
This footage is one of the most famous images of a purported Big Foot. Shot at Bluff Creek, California, the footage has never authoritatively been debunked.
Widget is loading comments... 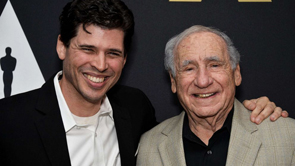