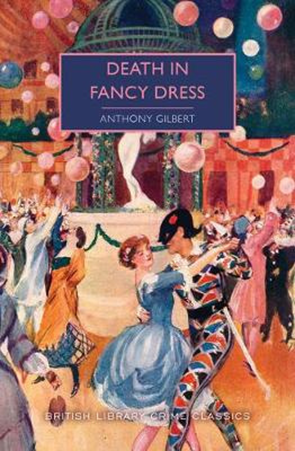 There are probably lots of spoilers in this review. Read at your own risk.

This was a bizarre mystery to read. At only 223 pages in total, I was expecting the titular fancy dress party to be near the beginning of the book and for the death to occur pretty quickly. Instead, the party doesn’t even get mentioned until page 105, guests only start arriving at page 115 and the body isn’t discovered until page 153. Then it’s solved in 47 pages, with the last 23 pages being explanations and follow-ups.

Most of the book is more concerned with a blackmailing ring, one that has targeted a number of prominent, wealthy people from the upper class. Our main characters, the narrator Tony Keith and his friend Jeremy Freyne, are sent to Feltham Abbey to investigate by someone high up in the Home Office. They have an entry there, as the abbey is the home of Tony’s aunt, Eleanor, and she is the step-mother of Hilary whom Jeremy wishes to marry. They are meant to assist Arthur Dennis, a secret service agent assigned to the case. Arthur is also the fiancé of Hilary. The investigation is meant to be top-secret, but for some reason Jeremy is allowed to assist, just because he happened to turn up to a Home Office meeting with his friend Tony. That sounds reasonable, yeah.

Tony and Jeremy arrive to find the house in an uproar, as Hilary is missing on the moors. When she finally turns up, it seems she actually spends the evening with her cousin, Ralph Feltham, a main suspect in the blackmailing ring. He also wants to marry Hilary, but everyone is in agreement that this would be disastrous for poor Hilary. She would be ruined by the scandal. Her reputation is already in tatters after merely spending an evening with him. Seriously, it’s mentioned several times in the book that Hilary’s stock has dropped because of her rash actions, as if she was a prize horse or some other piece of livestock. It’s well established that Ralph is a cad and a bounder, and also, it seems, a murderer (he apparently murdered some woman in France but got away with this with no consequences – “we remembered that French hussy he’d done for, and though she wasn’t any better than she should ha’ been, and French, which do seem to make a difference”). He’s practically a pure melodrama villain. It wouldn't have surprised me if he’d tied Hilary to a railway track at some point, but luckily he gets murdered himself before he can do that.

The local police are supposedly investigating the murder; at least it gets mentioned a few times that the police have been bothering everyone with questions. But we never get to meet any of them. They’re not part of the story. Instead, we mostly follow Tony and Jeremy as they stumble around, and finally Arthur, once they remember that he is actually secret service and that they really should share what they discover with him. I’m not sure I would have trusted Arthur myself, as he declares openly a few days before the party that Ralph needs to be killed and that they had to do it in a way that looks like an accident (suicide and murder would bring additional scandal to the family and that couldn’t be allowed). He does reassure everyone, however, that he has never killed a man unnecessarily in his life, so that’s all fine and acceptable.

I found this to be an entertaining mystery, but one with a lot of moral ambiguities. Everyone has some very dubious motives for the various things they do and I found myself shaking my head over a lot of the attitudes, especially those concerning poor Hilary’s reputation. And her love life was one of the really bizarre aspects. Okay, so she was engaged to Arthur. No problem there. He seems to be a socially acceptable suitor. But she wants to be free of the engagement so she can marry Ralph, and not just because she is being blackmailed into it to protect the reputation of her dead father. And the reputation of her step mother, who is determined that her new husband shouldn’t know what her first husband (Hilary’s father) had got up to or that she had been paying off Ralph for some time to cover up the fact that husband #1 had actually done what he was accused of (selling war plans to the Germans in 1918), and is now fine with Hilary marrying the bounder to keep him quiet. Hilary also finds bad boy Ralph very attractive. Then Jeremy comes into this love tangle - he hasn’t seen Hilary for years, but has a random encounter with Tony in India, decides to return to England with Tony, and declares as their boat is docking in England that he has decided to marry Hilary and that he will immediately seek her out and tell her so. I kind of wished Hilary had ended up with Ralph, even though he is a blackmailer, as that seemed to be what she wanted, rather than what the other men had decided was best for her.

What was really good about this book was the setting; the privileged world that Tony, Eleanor, Hilary and all the others inhabited. The book was first published in 1933 and internal references suggest it is set 1930-31. There are plenty of references to the upheavals caused by the War, but none of the characters seem to be overly impacted by the Wall Street crash. Not all of them have money, but this seems to be more due to generations of dissolute living rather than the Depression. The war, however, still lingers. It is still seen as important what roles a person served and how they behaved in the war, and the fear of scandal is real for Eleanor and Hilary even after all these years. There are also reminders every so often of the number of young men killed or maimed and the impact this has had on their families.

Eleanor’s new husband, James Nunn, doesn’t come from the same background as the other. He is a self-made man and at one point Tony wonders if the county had accepted Eleanor’s new husband because of her social brilliance (despite the scandal of the her first husband’s possible treasonous actions and subsequent suicide) or because he had won them over himself. His inferior social position is emphasised a fair bit. He might have more money than any of the other characters, but he doesn’t have their background of privilege. Oddly, I found him an appealing character. Agatha Christie often portrayed self-made millionaires as buffoons or jokes in her plots, set up to emphasise how they didn’t really fit into the world of the Country House Party. Gilbert, rather, has made Nunn an honourable man who is proud of his origins and who is well-regarded by most of the county. But he’s really a minor character in the story and we don’t get to see as much of him as he deserves.

This was an enjoyable mystery. My edition is from the British Library Crime Classics, a series which republishes long out of print golden age mysteries. As well as the titular story, this edition also includes two short stories which were entertaining, ‘Horseshoes for Luck’ and ‘The Cockroach and the Tortoise’. I figured out the plot in the first one, but the second one had a twist that completely surprised me. 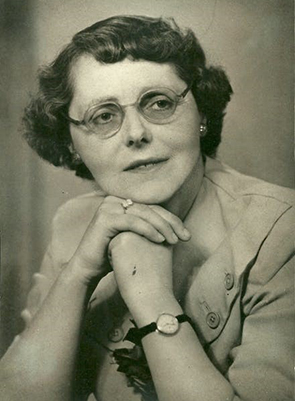 Anthony Gilbert
Anthony Gilbert is the main pseudonym used by Lucy Malleson. She also wrote under the names J Kilmeny Keith and Anne Meredith. Her first mystery, The Man Who Was London, was published in 1925. Her books were often critically acclaimed but she didn’t have commercial success until 1936, with Murder by Experts, her first book to feature her main detective, Arthur Crook. Most of her books are long out of print, but Death in Fancy Dress was republished in 2019 as part of the British Library Crime Classics series. 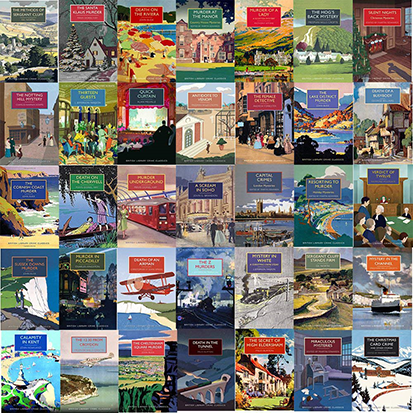 British Library Crime Classics
The British Library Crime Classics is a collection of classic and often overlooked mysteries from the Golden Age published by the British Library since 2012. Some are reprints of long forgotten books from authors such as Anthony Berkeley, Anthony Gilbert and Freeman Wills Croft. Others are anthologies of short stories, each around a theme, such as Capital Crimes (mysteries set in London); Murder by the Book (mysteries with a literary theme); or Blood on the Tracks (railway mysteries). Martin Edwards, author of the Golden Age of Murder, edits the series and writes an introduction to each book. The series is characterised by their covers which have a consistent look, each featuring elegant artwork, reminiscent of thirties railway posters.
Widget is loading comments...