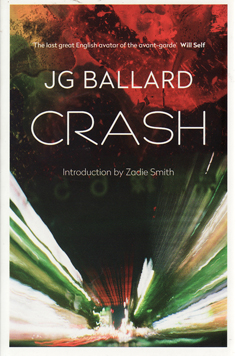 As I read Crash I tried to describe the novel to people I knew, all of whom looked at me with various expressions of distaste, confusion, perhaps even disgust. There is no getting around the fact that the easiest way to describe the novel is a pornographic hymn to modernity set in cars, near cars and with cars. On reflection, I don’t remember a single scene in the novel which takes place away from an automobile. Most take place on freeways close to the airport, their spaghetti interchanges spiralling erotically across the landscape: or at crash test facilities; at a car wash; on the side of the road; in cars; in wrecking yards. The situations involve sexual encounters and car crash victims which, in the mind of Dr Robert Vaughan, one of the novel’s protagonists, have become conflated. There is not a tree or blade of grass to be seen in this novel. This is a city landscape of concrete, pollution, crumpled wrecks and crumpled bodies. Wordsworth’s Romantic Lake District has been replaced by the autopia of Ballard’s modern vision of England.

The plot centres on the opening scene of the novel in which James Ballard, the author/narrator, tells us that Vaughan has been killed in a car crash while trying to kill Elizabeth Taylor, the actress, just outside the airport. We learn that Vaughan has nursed a fetishist desire to die with Taylor in a car crash for some time, and the story now told by Ballard recounts this growing obsession and the practice runs Vaughan has made that lead to this encounter.

Naturally, Ballard’s use of his own name for the narrator, as well as placing a real actress in this auto/erotic world, seem significant. After reading the novel I wondered whether it had been based around a real incident, a near escape in the early seventies for Taylor, but I found nothing except the story of her rescuing Montgomery Clift from a car accident in 1956. It was rather dramatic. Clift crashed his car after attending a party at Taylor’s house. She climbed in through a back window of the car to help him and found he couldn’t breathe. His teeth had been shattered in the accident and some had lodged in the back of his throat. She put her hand into his mouth to dislodge the teeth, thereby saving his life.

And it doesn’t take much effort to raise other examples of this nature. James Dean, as he lay dying next to his destroyed Porsche, is photographed pleading for help from his potential rescuers. There is a website which forensically analyses all the information known to recreate the scene in slow motion. Princess Kelly’s death, impaled by a tree in a car crash, is also the subject of detailed information of her injuries, reminiscent of the injuries Ballard explores so erotically in Crash. And Grace Kelly’s death naturally reminds us of Princess Diana’s in France in 1997 after being pursued for no other reason than she was beautiful and famous. Ballard extends the possibility of erotic violence to President Kennedy, shot in a car next to his wife, and his brother, Ted Kennedy, who drove his car off a bridge on Chappaquiddick Island in 1969, causing the death of Mary Jo Kopechne, who drowned, with all the potential of salacious innuendo nascent within the story.

Ballard identifies a nexus between the human body and the fine lines and manufactured finish of the modern automobile, and then extends that to the alluring glamour of celebrity: “How much more mysterious would be our own deaths, and those of the famous and powerful.” He describes cars as a pornographer might describe women, in all the minutiae of their gleaming exterior and curves, and their inner soft surfaces. The fascination with the car crash is the fascination with “wounds [which] were the keys to a new sexuality born from a perverse technology.” (6) When Ballard crashes his own car at the beginning of the novel, killing a man and injuring his doctor wife, Ballard imagines that “the crash between our two cars was a model of some ultimate and yet undreamt sexual union.” (19)

It is not surprising that this new sexuality involves a fetishism with wounds and the changes to the body forced upon it by the armature of back supports and leg braces. When Ballard has sex with Gabrielle, her body previously broken in an automobile accident, he articulates the possibilities of a new sexualisation; of wounds as invaginated sexual organs, and the impressions left in her skin by her braces as “templates for new genital organs, the moulds of sexual possibilities yet to be created in a hundred experimental car-crashes” (146)

There is an uneasy contemplation of wounds throughout the book and the bodily fluids produced by sex and the car-crash. Blood, semen, mucus, vaginal fluids, engine coolants, urine, oil, vomit and petrol are all returned to time and time again in a meditation upon the violent sexuality Ballard perceives between cars and their occupants, and between occupants in cars.

In her introduction to my copy of the novel Zadie Smith describes her initial disgust with the book, as many were disgusted in the 1970s. Apparently, a reader for the publisher wrote, “This author is beyond psychiatric help. Do not publish.” This might be an initial reaction to the book, but as Zadie Smith states, the real horror isn’t in the sexual acts themselves, but the pervasive invasion of technology into our lives and its impacts upon our humanity: “Not man-as-technology-forming but technology-as-man-forming.”

I think there is something in this thought. Ballard’s novel High-Rise picks at the scab of similar issues when he describes the social disintegration of the residents of a housing tower as they begin a social war against each other, leaving many dead, the social fabric of marriage and natural consanguinity destroyed, and a new kind of human emerging. This descent is couched in a vaguely biblical context, with the architect living at the top of the tower in his garden, while the tower itself forms a neat equivalent with Babel, a work of hubris that leads to the scattering of human society in the Bible. In High-Rise the utopian vision of the building is illusory, removing humanity from the natural world and its natural restraints. There is something inhuman and dangerous implicit in the works of the modern world, we think.

I think this helps to understand Ballard’s link between the car and the body, between the car crash and the sexual encounter. The meditation upon the wound, it seems to me, is merely a revision of older preoccupations with wounding in religious texts; a new kind of worship inspired by an equally perverse ideology. After all, there is a long tradition on the meditation of Christ’s wounds and a long history of martyrdom in the face of the Roman Empire, or in the internecine conflicts of the Reformation, to start with. Most famously, I think, are the injuries suffered by Thomas Becket from a blow to his head, his brains spilled by the crushing blow, being exemplary of the martyr willing to die for belief, or Thomas More, refusing his King and losing his head. I think the difference between the religious iconography of the wound and what Ballard is doing is that sexual desire, in line with Christianity’s roots in neo-Platonic mysticism, is displaced from the body and reimagined in a union with Christ, the Bridegroom. The title page of Foxe’s Actes and Monuments (known as 'Foxes's Booke of Martyrs') or the Pollaiuolos brothers’ Martydom of St Sebastian make the point visually. These martyrs are wounded, burned and scorned, but their thoughts fly heavenward, eschewing the wreck of their physical bodies, in a joyous exaltation of trumpets, or the tranquil gaze of Sebastian towards his God.

That the modern world may have produced a new kind of mystical union through technology is suggested through the use of religious language in a kind of pornographic hagiography by the Ballard/narrator several times in the novel:

He drew from his pocket a grimy square of silk scarf. He spread it carefully on the seat between us. Lying in the centre was a triangle of bloodstained grey leather, the drying blood still a bright carmine. Experimentally, Vaughan touched the blood with his fingertips, brought it up to his mouth and tasted the tacky fragments. He had cut the piece from the front seat of the Mercedes, where the blood from the woman’s abdominal wounds had flowed between her legs.

Mesmerised, Vaughan stared at the fragment, prodding the stitched vinyl inlay that traversed the triangle from its apex. It lay between us like a saintly relic, the fragment of a hand or shinbone. For Vaughan this piece of leather, as delicious and as poignant as the stains on the gusset of a shroud, contained all the special magic and healing powers of a modern martyr of the super-highways. (154-155)

The automobile has provided the means for a new kind of worship, encumbering the celebrity with religious significance:

Each of the spectators at the accident site would carry away an image of the violent transformation of this woman, of the complex of wounds that fused together her own sexuality and the hard technology of the automobile … Each would place his lips on those bleeding apertures, lay his own nasal septum against the lesions of her left hand … The automobile crash had made possible the final and longed-for union of the actress and the members of her audience. (156)

This minor celebrity, injured and dying in her automobile, her sexuality transformed by the agency of the crash, becomes a representation of all victims in their cars and the possibility of a worshipful connection of this new goddess through the transubstantiation of her suffering and her wounds. It is little wonder Ballard describes himself as Vaughan’s “eager disciple” or that he should describe the “cathedral-like vaults of the overpass”. The modern world and its physical constructions has replaced the traditional religious structures and institutions, has displaced the locus of its worship and has appropriated its imagery and its art in a violent mechanised culture that is not only shocking, but subtlety deconstructs the ideology and narratives of the older culture.

I think it would be easy for anyone reading Crash to be shocked or outraged by its graphic sex and violence. I think there would be a justifiable argument to be made about its objectification of women into a kind of plasticised commodity. However, I think the book has much to say about the impact of modernity upon our humanity and seems even more relevant now than in the 1970s. Crash is not an easy read, but it is compelling. 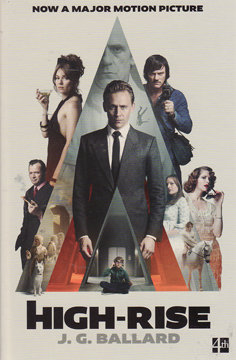 The testing of the building he had helped to design was a testing of himself. Above all, he became aware that a new social order was beginning to emerge around him. Royal was certain that a rigid hierarchy of some kind was a key to the elusive success of these huge buildings. As he often pointed out to Anne, office blocks containing as many as thirty thousand workers functioned smoothly for decades thanks to a social hierarchy as rigid and as formalized as an anthill's, with an incidence of crime, social unrest, and petty misdemeanours that was virtually nil. The confused but unmistakable emergence of this new social order - apparently based on small tribal enclaves - fascinated Royal. To begin with, he had been determined to stay on, come what may and whatever the hostility directed against him, in the hope of acting as its midwife. In fact, this alone had stopped him from notifying his former colleagues of the mounting chaos within the building. As he told himself repeatedly, the present breakdown of the high-rise might well mark its success rather than its failure. Without realizing it, he had given these people a means of escaping into a new life, and a pattern of social organisation that would become the paradigm of all future high-rise blocks.