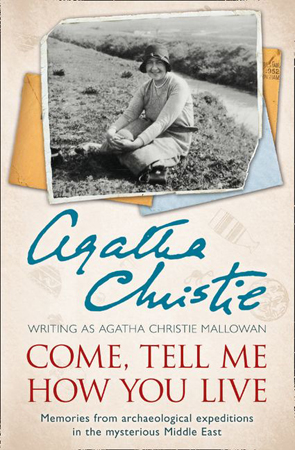 Come, Tell Me How You Lived
Agatha Christie

This is my first review of an Agatha Christie, and rather than choosing one of her superbly crafted mysteries, I chose this light memoir on her life at an archaeological dig in Syria in the 1930s. Christie was married to Sir Max Mallowan, a distinguished archaeologist who conducted a series of digs in the Upper Khabur region of Syria. Christie accompanied her husband on these digs, and contributed to his work in the field, including acting as the photographer for the expedition. Friends had asked her about the strange life she led in these remote areas, so she started to keep a journal of happenings in their daily life. Feeling nostalgic for this life during World War 2, she turned these notes into a short memoir. It reads like snippets from a letter written to a friend.

There is a nostalgic feeling to this book, as it evokes a feeling for the age and gives a sense of what it would have been like to have lived in that world. There isn’t much detail concerning the significance of Mallowan’s work, as this book is mainly about their day-to-day life and of the people they shared their life with – expedition members, household staff, the workmen and the local population. I especially loved the local post master who was never at the post office and always had to be summoned by an underling. He usually appeared in pyjamas and had a habit of trying to get them to take any mail that seemed to be addressed to a European. There was also the wonderful professional cat who was called in when their accommodation was overrun with mice, hundreds of them running over the beds every night. He stayed for only a week, but they were never plagued with mice again.

Christie writes in a witty fashion, laughing at herself as well as at the foibles of others. She took much pleasure from the life they lived in this part of the world, so remote from everything she knew earlier in life and so removed from most western comforts such as electricity, running water or reliable transport.

She found this part of the world to be beautiful and completely peaceful, a peace that she remembered with much longing when she turned her journal into this book after living through four years of war in London. She describes writing the book as a joy and refreshment to her and looked forward with pleasure to being able to return after the war.

Apart from getting a view into life on a dig, this book also gives us an insight into the personal life of Christie and her husband. I previously knew about her first marriage ending in divorce and the strange period when Christie was missing without explanation. I also knew that she later married an archaeologist. But I knew little apart from this. One thing I feel from this book is that her second marriage was a happy one. The little snippets of interactions between her and Max show the affection they obviously had for each other, their relationship surviving even Max using her as a dead weight to close his overflowing luggage in the opening chapter.

Of course, apart from participating in the life in the Middle East with her husband, Christie gathered a lot of background material for many of her books. She did some her writing there on days when she didn’t accompany Max to the dig site, and completed a large volume of work in this period. She also set many stories in this world, such as Murder in Mesopotamia, Murder on the Orient Express, Death on the Nile, Appointment with Death and Death Comes as the End.

One thing that I found to have current significance in this book is contained in the following quote:

We come to the question of religions generally, a very vexed question in this particular part of the world, for Syria is full of fiercely fanatical sects of all kinds, all willing to cut each other’s throats for the good cause.

Not much seems to have changed in Syria since the 1930s, with Syria currently devastated by a war which developed from the Arab Spring and has been prosecuted by government and other international factions, as well as by various religious sects. Places that Christie describes so vividly and takes so much delight from their beauty and peacefulness, are now overrun and probably destroyed. One such place is the holy shrine of Sheikh Adi, a holy site to the Yezidi people, described by Christie with there can be, I think, no spot in the world or beautiful or so peaceful. A fairly recent news article described the area as hell on earth.

The areas where Max Mallowan excavated have been described as the cradle of civilisation, where some of the most important developments in human history occurred: the invention of the wheel, the plantation of the first cereal crops, as well as the development of cursive script, mathematics, astronomy and agriculture. The Temple of Bel in Palmyra (described by Christie as lovely and fantastic and unbelievable) was dedicated in 32 AD, and its ruins were one of the best preserved ancient monuments until it was destroyed in August 2015. This destruction of so much heritage that is significant to the culture of all humanity, not just to a single religion, is a horrifying act of cultural cleansing from a group intent on imposing their own views over the rest of humanity. Christie’s perspective from the 1930s helps us appreciate that.

Overall, I loved this book, finding it light-hearted and entertaining, and evocative of the time between the world wars. Highly recommended. 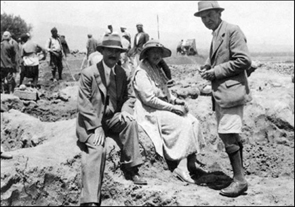 Agatha Christie in Musilmyah Aleppo in 1935 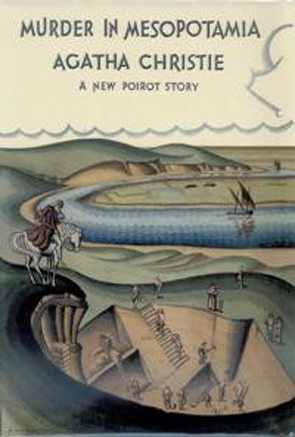 Murder in Mesopotamia is one of the books in which Christie used her knowledge of archaeology to provide the detailed background for the story. This is the cover of the first UK edition, drawn by Robin Macartney. Macartney was a member of one of Max Mallowan’s archaeological surveys in Syria, and is a character in Come, Tell Me How You Live.