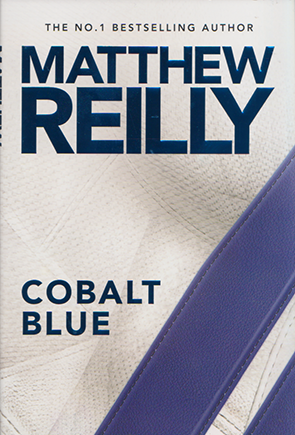 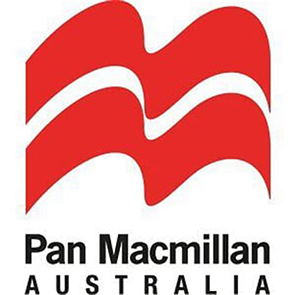 For anyone familiar with Matthew Reilly’s novels, it may not be too surprising to learn that he has moved into action films with his directing debut of Interceptor, made for Netflix. Reilly’s novels read like fast-paced, high-octane-fuelled adventures, set in exotic locations and involving high profile, high-stakes players, all of which feels like it has been written with the possibility of selling film rights in mind. For this reason, it should also come as no surprise that Cobalt Blue was developed from a screenplay Reilly had been working on. Cobalt Blue is set in an alternate reality in which – much like many Hollywood films and television shows now – superheroes are real. Superheroes have become part of the zeitgeist of the modern world, and it’s not hard to understand why. As super enhanced humans, superheroes lead lives of emotional extremes: their stakes and the dilemmas they face are also super enhanced. They are us writ large and they may reflect our current political and ethical challenges in the stories produced about them.

Cobalt Blue reminds us that Matthew Reilly will never write a subtlety plotted novel, produce complex characters or appeal to any awards committee. Like other novels by him, Cobalt Blue is an unsophisticated action adventure full of two dimensional characters, with a plot that is all surface. It has pretensions of reflecting a current political environment – the re-emerging Cold War between America and Russia, no less – but the politics of the story are mere window dressing, a backdrop for his Mattel action heroes who are wont to thwack each other with extreme thwackedness.

Reilly has exploited other popular movies and genres as sources for his own fiction in the past. The Jack West Jr series, for instance, has shades of the archaeological and supernatural elements of Indiana Jones, and his Scarecrow novels are like a lot of intense military mission movies, again with a smattering of the supernatural. When Reilly wrote The Great Zoo of China, I thought of Jurassic Park.

Now there is Cobalt Blue. Reilly’s super ability is to tap into the zeitgeist, even if he doesn’t direct it.

Nevertheless, there are several factors which will make this novel appealing to many readers. After all, I have read Reilly before and I know his limitations as a writer, but I still keep buying his books. For me (and this indicates one reason why Reilly’s novel may appeal to others) I occasionally like to read something I don’t have to think about; a kind of mental holiday, if you will, in which exotic cocktails are decanted into my open mouth as I lay recumbent in a deckchair thinking about muscles and adrenalin.

This is why, before I say anything about the plot of Cobalt Blue, that I feel obliged to offer some defence of Reilly’s novels. Reilly’s plotting and characterisation are simplistic and he tends to focus on ridiculously large action sequence that sometimes become self-parodying in their ostentation. But there is a place for these books even if someone like me may write smarmily about them. As a former teacher I know the difficulty of getting many teenagers to read, particularly boys. Yet I found Reilly appealed to many boys who may not have otherwise read a book. If you are a parent and are wondering whether Cobalt Blue or other Reilly books would be good to buy for a reluctant reader, then my answer is an emphatic YES! Reilly’s novels suffer in the qualities that readers often enjoy because they do get to the action straight away. Reilly not only uses chapters, but he uses sub-headings which break up blocks of text and help guide the reading. Cobalt Blue even uses different coloured text to represent the backstories of the various American superheroes who are all codenamed by colour. It makes for a visually appealing book, at least in this early hardback edition I purchased. Reilly’s books are also full of illustrations and maps which help visual and concrete thinkers. His scenes are short. There is little time to get bored. All this may be abhorrent to the snob reader who should be reading Jane Austen*, instead, but for anyone who hasn’t had their childhood surgically removed, all this may even be a source of some delight.

Cobalt Blue begins – as many superhero stories do – with an accident. Dr Christine Cobalt from America and Sergeant Furin from Russia are in the Arctic Circle 35 years before the action begins to investigate the remains of a satellite returned from Venus. When a superhot panel from the satellite explodes they are both enveloped in gas and – hey-presto – they are superheroes! Furin becomes known as the Fury of Russia and Cobalt takes her last name as her superhero identity. For 35 years Russia and America remain balanced – much like the nuclear deterrent itself – until America’s superhero dies of old age. At that moment, the Fury of Russia attacks America, intent on taking out America’s military capabilities and other targets, and subjugating the nation to his will. He also has one other objective. In the years since the accident both Russia and America have bred other superheroes from Fury and Cobalt’s altered genes. Fury has produced six sons from his many encounters with willing Russian women – the ones who survived – each with super powers roughly half that of Fury’s. Seven children have also been bred from Cobalt’s ovum, all possessing different skills roughly half that of their mother’s. An eighth child, Cassie, was born naturally. For years she has been kept hidden. But now, as the Fury of Russia and his offspring sweep across America, killing Cassie’s siblings and threatening America’s very autonomy, Cassie realises she will have to step up to try to stop Fury when her siblings fail. The only thing is, Fury, who was once rejected by Cobalt when he proposed a relationship between them for breeding purposes, is now determined to force Cassie to become his partner in her mother’s stead.

I bought Cobalt Blue shortly after finishing the third season of The Boys, a superhero television series about American heroes who may be more a danger to America than its savours. The titular ‘boys’ is a group who know the dangers the superheroes represent, and are intent on stopping them. Led by Butcher, their own tactics are morally questionable and violent. The show reflects many of the political issues caused by the emergence of Trumpism in America. It is interesting that Reilly mentions the show in an interview printed at the end of his own story: “I’ve watched the superhero TV show, The Boys, and while I’ve enjoyed it, it’s a bit too dark for my writing tastes. I still like to experience a story with the ‘good guys’ as the leads, not the bad guys.” I found Reilly’s assessment indicative of his own writing approach. While there may be good reasons for someone to pick up this book to read, Reilly’s moral spectrum is as black and white as his plotting and characters. The Fury of Russia is a cartoon villain and Cobalt Blue, as Cassie comes to call herself, is entirely good. There is a sense that Cassie is like Lily from the Jack West Jr series. She has seven siblings to look out for her, train her and protect her as she grows, much as Lily has Jack West’s team to look out for her. And while Cassie may appear to be weaker than her sibling heroes, she has strengths the others lack. However, Reilly does not indulge in the extreme infantilising and idealisation of Cassie that he does with Lily. Nevertheless, Reilly’s moral simplicity reveals what should be obvious. Reilly’s story is just a comic in prose. The allusions he makes to ancient writings in his books (two are used as the epigraph to this novella), the political backdrops of his stories and his research into real world weapons and procedures, are merely a backdrop for what we should understand we have paid our ticket for: a good bit of biffo.

* I also really like Jane Austen and would recommend her to anyone. But let’s face it: sometimes you just want your characters to stop with the witty repartee and hit each other.

Watch this trailer for Interceptor, which screens on Netflix. It gives a good idea of the kind of stories written by Matthew Reilly. He co-wrote the screenplay and directed the film.
Widget is loading comments... 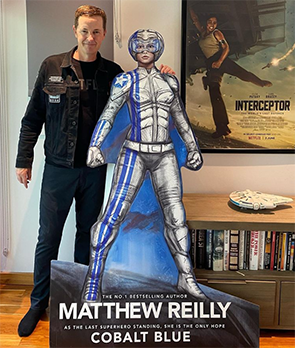 Matthew Reilly
Matthew Reilly with a promotional standee of Cobalt Blue.
The visual design of the character is repeated in coloured illustrations of the edition I have reviewed. While Matthew Reilly’s writing might be characterised as appealing to a young male audience, he is keen to promote female action characters and other minority groups. In Cobalt Blue the American superhero is female and is succeeded by her daughter, Cassie, who takes on the identity, Cobalt Blue. One of Cassie’s hero siblings, Gary, otherwise known as Cobalt Gold, is gay. Reilly’s hero in his film, Interceptor, is also female.

And Russia each had their


Today will be bad.