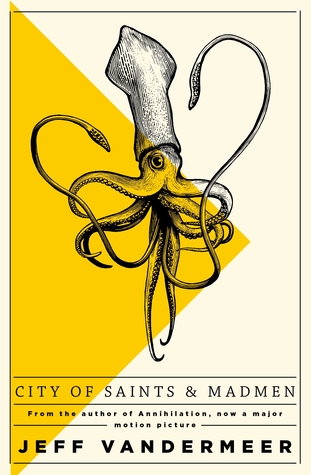 Being in lock down for 6 months and only leaving once a week for a contactless vegetable pickup from a local farm CSA, everything sort of takes on a surreal fever-dream quality. “Did I make pizza yesterday or three months ago? Or am I eating pizza for every meal, every day, having it as snacks between meals in small bites, blending it into a smoothie for all my beverages, writing notes on old stale pizzas to myself and then waking in the night and eating these would-be notepads? To ingest something is to fully control it. I am lost inside my mind, inside an apartment unit, inside a pizza.”

As you can tell, this is the perfect time to read a 700-page tome about a nightmare city that is full of dystopic mysteries and meta-texts. From the start, I’ll say this is a four out of five lichens read.

City of Saints and Madmen is a collection of short stories about the fictional city of Ambergris. That's the easy way to describe this book. Really, this book feels like a living piece of Ambergris itself. Like some large boulder out in the woods broke off and now you're holding it here in your hand hoping it stops oozing that viscous black substance, oh please stop leaking, how are you even leaking you're a rock, what is happening? Even more concerning, when you hold it in your hand and turn it to look at the opposite side, and then turn it back again, you notice that the original side is gone, showing you a whole new face of the stone. This keeps happening over and over.

The book starts off as most other books do: with words. A few short stories set the tone, themselves full of weird elements that have become a hallmark to VanderMeer's style. Dradin, In Love tells a hectic story of our titular character Dradin, a priest who returns to Ambergris during the Festival of the Freshwater Squid, and falls in love with a woman he sees in a window. The chaos that envelopes the city during the festival threatens not only the life of Dradin, but equally threatens his mind. Can you survive the madness without going a little mad yourself? Can you find love while going mad? Is any of this real?

Mushroom people? Yes. The Gray Caps should be avoided at all costs. They caused The Silence, after all. Fungi remains a foremost problem throughout the city; dangerous, toxic fungi mark a death sentence for most who even come in contact with it, let alone anyone who may ingest it fresh. Though some will indulge on it when it becomes thoroughly dried out, it's best to report any findings and avoid exposure. Some say that the Gray Caps have an entire city underground, twice as large as the city of Ambergris above. They travel by converting themselves into mushrooms that grow on command. They eat mushrooms, pray to mushrooms, build with mushrooms ... they are mushrooms. What good can come from their existence?

The book continues: we're taught all about the King Squid's biology and characteristics, and the lore between it and the Festival of the Freshwater Squid. The 20+ page bibliography of books accompanying the work let you know it’s been thoroughly researched. Also, the author is very interested in how people turn themselves into squids. We read notes between doctors about a strange patient from a land known as “Chicago”. We then read (attempt, anyway) an encrypted story written by this stranger. We learn about the Hoegbotton family history, read a tale of a man who purchases a seemingly-empty bird cage, and watch as a writer of perfect sentences tries to write a perfect sentence about an unloved midget. The 70-page glossary of important terms related to Ambergris and a note on the fonts used throughout the book really encapsulate the minute detail that the book covers.

All this detail and history and hundreds of fictional books written by dozens of fictional authors about fictional topics about a fictional city. To really sit and read the book is to feel like you have gone on vacation to Ambergris and spent a week getting lost in the streets and shops of the city, and then have stumbled down Albumuth Boulevard, bumped into the wrong person, and have been stabbed to death magnificently. Ah, to live and die in Ambergris.

It's almost like the city isn't fictional at all and we just can't seem to find it. Like it could be hiding somewhere just out of reach, but we don't want to dive down into the blackened chasm to find what lies on the other side. Read this book and find the way. Please, find us. Please find Zamilon.

The deluxe second edition of City of Saints and Madmen, published by Prime Books, had new material added to an appendix. The cover art was surrounded by a readable short story, also new to the book. 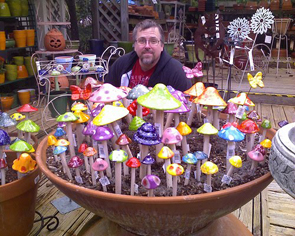 Jeff VanderMeer poses with mushrooms (or is that mushroom people?) 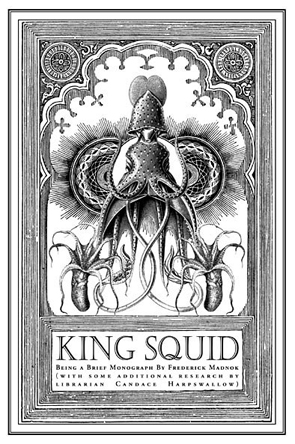 King Squid is a fictional research piece on the giant squid of the world of Ambergris. The piece is typical of VanderMeer’s world-building through a series of novellas and other metatextual writings that immerse the reader in VanderMeer’s world.