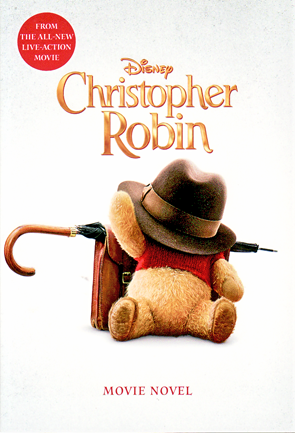 A few weeks ago our son, who works at a movie theatre, said he wanted to go and see Christopher Robin. Maybe it was the fact that I grew up with Winnie the Pooh as a kid – I'd seen the previews of the movie – and I was less than inspired by it. However, the family all decided they would go, and I must confess that it is one of the most charming movies I have seen for a long time. This prompted me to buy the book.

The movie combines traditional animated drawings with a live component. The story book, which is a movie tie-in, was also illustrated with the same black line sketches. Both pick up with Christopher Robin, played by Ewan McGregor as the adult, growing up and going to boarding school and therefore having to leave his friends from the Hundred-Acre woods. Fast forward, and Christopher Robin is now an adult, married with a daughter facing the stresses and responsibilities adults face with juggling work hours and having a family balance. Winnie the Pooh has never forgotten his friend, Christopher Robin, and when Pooh can't find his other woodland friends, he ventures to London to try and get him to help.

Christopher Robin has grown up and moved on from his childhood, or so he thinks, but it takes Pooh, ever the optimist to remind Christopher that he hasn't really changed at all. Christopher and Pooh travel back to the woodland and are separated, but he manages to find the others, scared of the Heffalumps. There is a lovely scene where Christopher fights an imaginary Heffalump to convince the woodland animals that they are now safe. All your favourite childhood characters are in the book- Tigger, Piglet, Roo, Kanga, Rabbit, Owl, Eeyore and of course Winnie the Pooh.

Christopher, however, needs to get back to the city where he has been tasked to save staff and indeed, his entire company, but things go horribly wrong along the way, with Christopher eventually questioning just what is important in life, a path I believe many parents consider when being a parent. However, this leads him to see things in a different light, and to understand his wife and daughter's perspective on their family life so much more.

This novelisation is based on the screenplay and is a beautiful and fitting follow up to the Pooh stories that many older people like myself probably grew up with having read to them or later reading themselves. It continues to bring out the characteristics of the wood animals, such as Pooh, ever faithful and positive, and Eeyore, always glum. As for the movie, itself, the animals certainly had a more 'worn' look to them, showing their development over time, for the twenty odd years since they originally spent time with Christopher as a child. But the story itself was charming and an emotional ride. Having said that I think the story would appeal more to young children than the movie, which I believe is aimed at an older audience. The introduction especially with the traditional hand drawn animation may not these days hold a young child's interest as easily as perhaps they once may have in the past.

I thoroughly enjoyed the movie and also the book which I read afterwards. I'd recommend them for an adult or a young reader, though I'd suggest that younger children read the book prior to seeing the movie. 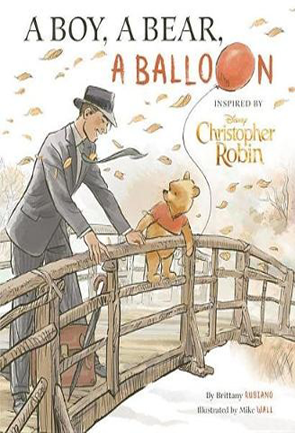 The day I purchased the Christopher Robin paperback I heard about this picture book, so having seen the movie and read the book, I decided to get the picture book and see how it tied in.

The picture book is an adaptation of one very small part of the overall movie and book of Christopher Robin. It starts with Christopher Robin already grown up, although the depiction of him suggests that he isn't as old as he is in the movie. The drawings still suggest a business man, but probably early twenties. The story picks up with Christopher Robin travelling back to the woods with Pooh, trying to help Pooh find his friends. It takes sections from the movie, concentrating on the relationship Christopher has with the wood animals, and leaves out other sections such as travelling to London to solve his work and family situations, except to mention briefly in spots that he has to get back to work.

A child would love the picture book with its beautiful sepia style drawings and large appropriate and affective fonts and storyline throughout. The illustrations of all the animals that we have come to know and love are beautifully designed. Of course, Pooh's red balloon is also a focus for young children throughout the first part of the picture book.

Again, it focuses on how adults sometimes lose their childhood and how memories can restore the magic once again.

For young children, the picture book may be a precursor to reading the novel or seeing the movie. It is certainly a quick read, but also one which could be used to play games with: finding the animals, making sounds they would make or acting out fighting the Heffalumps.

Again a charming, brief adaptation of the longer story. 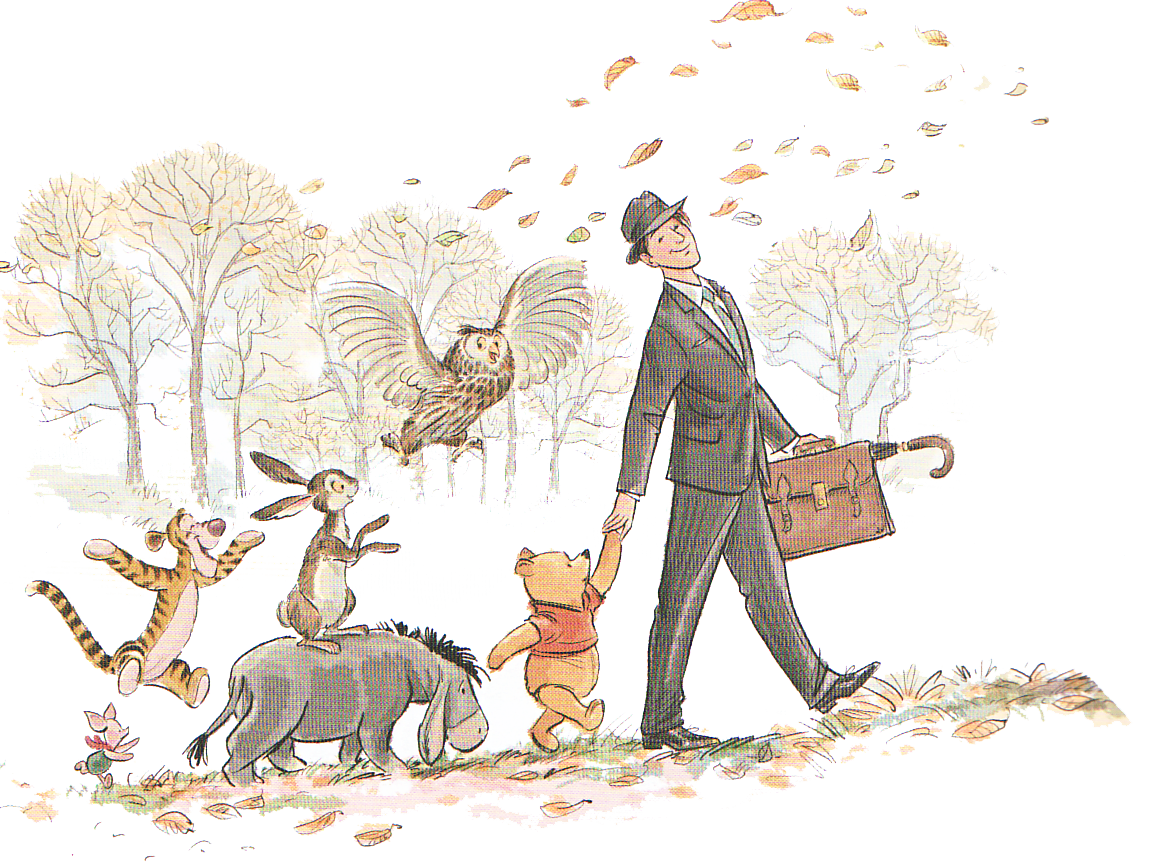