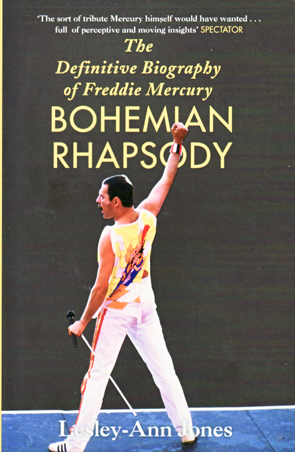 The Definitive Biography of Freddie Mercury

The review for this book has been a long time coming as it just took so long to get an opportunity to finish the book. My occasional reading schedule and the number of people documented in Lesley-Ann Jones’s account of Freddie Mercury’s life meant I found myself constantly having to recheck who they were whenever I returned to the book. It was a busy time for me. After becoming more familiar with some of the people who form a part of Mercury’s story it became a faster read.

I have always been a huge Queen fan. They were my favourite band throughout high school. I remember vividly going out with a guy who was also a Queen fanatic. He managed to get tickets to a Sydney concert, at which time I ended up in hospital with appendicitis and he took another girl. I was not only disappointed but inconsolable, especially when he broke it off with me for her.

But back to the book. No matter how much of a Queen and Freddie Mercury fan you are, there is a lot in this book that you probably don't know. It is written by a journalist who toured with the band and certainly knew first-hand the intricacies of Mercury’s life. The book contains a series of interviews with all the important players in the life of the band, especially Mercury.

Interestingly, although a biography, the book starts with Live Aid in 1985, probably because it was their performance that has always been hailed as the most incredible and well-received act of the concert, and it was also the concert which relaunched their careers after each of the members had gone their separate ways for a time. Those who have seen the film Bohemian Rhapsody know that Live Aid forms the triumphant last quarter of an hour.

This book was written in 2011, simply released under the title Freddie Mercury, and it is a definitive biography highlighting the many moods and lives of Freddie. It was rereleased in 2018 to coincide with the screening of the movie and thus, the change of title. However, the book was not revised for the release of the film. It still finishes its chronology in 2011, with the suggestion that Sacha Baron Cohen was to play Mercury in the upcoming movie, instead of Rami Malek who eventually featured in the film and received many awards for his portrayal of Mercury, including the Academy Award for Best Actor. I feel the book needed to revise this piece of information, at least, or possibly include an additional chapter to make it current. It would have provided an opportunity to also cover the band’s current line-up, with original Queen members Brian May and Roger Taylor now being accompanied Adam Lambert on stage.

Freddie has, and always will be remembered as a larger than life character and this book certainly well describes his life and the band’s dynamics, as well as between the band and Mary, Mercury’s earliest lover, his family, his many business associates and his final partner, Jim Hutton. The book also covers all the songs and albums right through to Made in Heaven, which was completed after Mercury’s death, and looks at their impetus at the time.

Jones’s book is detailed and immaculate, and it was certainly an enjoyable read, despite my lengthy read. As is generally the case, it fleshes out many of the relationships which are only briefly touched on in the movie.

The book has a vast array of black and white photos of Freddie's life throughout as well as a chronology, discography, bibliography and index for those who wish to delve deeper into Mercury’s life and influences.

On a final personal note, I remember when I was teaching in a multicultural Western Sydney high school, the news broke of Mercury’s death to AIDS. The school actually held a special assembly and everyone was in tears like they personally knew him. I don't remember a situation like this before or after. It was unprecedented.

I don't believe there will ever be another music legend like Freddie. He was indeed a champion. If you've seen the movie, this is yet another fitting tribute to him.

Having seen the movie three times so far, I also thoroughly enjoyed this book. 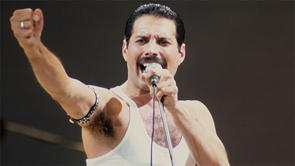 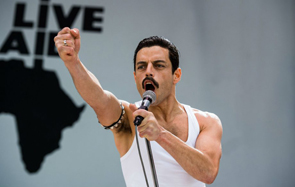 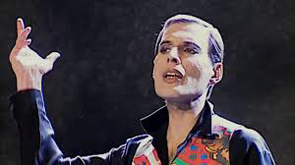 Mercury continued to work into his final days. He recorded the vocals for Made in Heaven, which was completed by the other band members after his death. He even filmed videos for their last studio album together, Innuendo. In this picture Mercury is costumed to appear in the video for their song 'These are the Days of Our Lives'. Death is a common theme in songs from the Innuendo album. The heavy makeup Mercury wore for the video could not disguise how gaunt and sick he was.