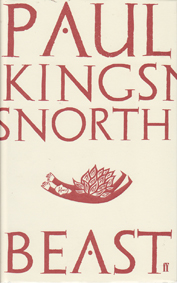 I was reminded of other books as I read Beast. For instance, while nothing really like Kafka, Kingsnorth’s book is a closed world, claustrophobic, contained within the mind of the protagonist, entirely from his perspective which is confused and unreliable, and disorientating for the reader.

The book’s premise rests with the story of Edward Buckmaster who has withdrawn from civilisation to nature, although never too far from our own world as the narrative suggests. His withdrawal is never specifically explained, although we get glimpses into a past, primarily concerning his estrangement with his wife and newly born daughter in order to seek enlightenment, like an ascetic priest of a bygone world. His motives are suspicious. As narrator, he frames his desertion in the ascetic tradition, but the reader should suspect other motives. His retelling of the story of St Cuthbert is exemplary. Buckmaster tells how St Cuthbert withdrew to a monastery, and when he found the monastery was not far enough, withdrew further to an island with only nature to accompany and sustain him. Significantly, Buckmaster concludes by describing how, after years of solitude, the King of Northumbria seeks him out, begging him to become Bishop of Lindisfarne. One senses the power Buckmaster fantasises over here; his sense of righteousness and therefore, his inflexibility.

The narrative recalls aspects of a more primitive, primeval, violent and passionate nature in Man. Buckmaster is obsessed with eschewing society, culture and anything else that comes between him and his revelatory quest: to become one with the natural world; to seek epiphany; to understand the nature of the universe, perhaps even God. But it seems clear enough that Buckmaster is undergoing an existential crisis:

I saw the abyss open up and I knew I would be swallowed by it and I knew that everything in my world everything I was and everything I thought and felt and cared about and refused to care about had been carefully constructed to help me survive any glimpses I might have of this.

Buckmaster feels civilisation is a sham that limits human perception, an insight which is both revelatory and frightening. The threat of all that civilisation holds back becomes embodied in the cat which first appears on the edge of Buckmaster’s vision, and finally consumes him in his search for it.

This disconnect with the human world reminded me of arguments in Fowles’s The Tree. For Fowles, it is science and language and every other human construction which prevents us knowing nature except through concept. But Fowles’s essay was far more balanced than the seemingly deranged mind of Buckmaster. As the novel progresses, Buckmaster’s language disintegrates. Words and sentences tumble together, punctuation is almost lost and a confused present and a disjointed past become entangled in a dense stream of conscious narrative. This is an effective enough device to portray the state of mind of the narrator, although I was not entirely engaged with it. The danger in this kind of writing is that it is alienating, but done well, can be successful. Ultimately, my problem was that in what I otherwise thought of as a very good book, the sense of revelation for the reader was denied. The glimpses we are afforded into Buckmaster’s past, that which ultimately may explain his decision to withdraw beyond aesthetic and philosophical justifications, seems withheld. For me, this happened because some of those vignettes were contradictory. At one moment, there is a horrifying sense of what might have happened, in another, it is something else entirely.

This is where I was reminded of another book, Ironbark by Barry Jonsberg. Jonsberg’s book tells the story of a teenage boy sent to the edge of wilderness in Tasmania to live with his grandfather after becoming estranged from his father. The second half of the story has some of the same elements as this one. Buckmaster sense of being pursued by the cat in this book is used in a similar situation in Ironbark with far greater dramatic and thematic punch. This is where I think the weakness of this book lays. I loved the premise of the story and its philosophical musings, but I felt there had to be a better payoff for the reader at the end.