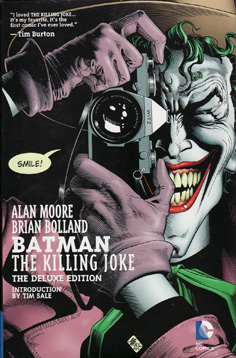 This rather slim Joker story manages to cover a lot of ground and has some surprises in store for the first-time reader familiar with the Gotham universe. First published in the late eighties, the book was seen as a landmark in the graphic novel genre for its high quality art. It’s writer, Alan Moore, whose work I first appreciated when I read The Watchmen many years ago, once again delivers psychologically complex personalities, an interesting story, and a world of moral ambiguity. This book isn’t as accomplished narratively as The Watchmen – it’s far too short to achieve that complexity – but its artwork far exceeds the level of art produced for The Watchmen.

The edition I read is a reissued twentieth anniversary edition. The artist, Brian Bolland, was given the opportunity to recolour the images from the earlier eighties edition, for which someone else did the original colouring. The use of colour to represent flashback scenes, to highlight detail, and to produce startling images, is a hallmark of this book, along with the attention to detail and the craftsmanship of each frame.

Without giving anything of the story away, I was surprised at the risks Moore and Bolland were willing to take with their narrative. The catalyst for the story seems to abandon canonical versions of the stories I know, but provides a powerful moment that underpins the Joker’s assertion, “All it takes is one bad day to reduce the sanest man to lunacy.”

This is reinforced in the Joker’s origins story told in a series of flashbacks which segue nicely with the present-day action. The Joker is humanised in these flashbacks and we feel sympathy for his personal situation and his lack of power.

As in other versions of Batman, the Joker is not only a nemesis, but an alter ego of Batman. The Joker tells Batman “That’s how far the world is from where I am. Just one bad day.” Batman is what the Joker might have been had things been different; had the Joker been a different man: “You had a bad day, and it drove you as crazy as everybody else only you won’t admit it.” The Joker’s taunt implicates not only Batman in his insanity, but all of us. One bad day is all it takes to set a person’s destiny off course and put them at odds with humanity.

This duality underpins the entire story. When Batman visits the Joker in prison he seems a man haunted by the sense of their shared destiny: “I’ve been thinking lately about you and me, about what’s going to happen to us in the end. We’re going to kill each other, aren’t we?” For the Joker, it is this sense that either of them are on the brink of insanity and violence at any moment that makes them the same. For Batman, he is a man haunted by the possibility of guilt.

Moore and Bolland establish the foundations of the denouement from the very first frame of the book. These issues play out, right to the end, in a surprising but logical and satisfying conclusion. There is no way to talk about the end without spoiling the book for anyone interested enough to read it for themselves, but it is deeply satisfying and clever. The book has much more to offer than I can suggest in this review. It’s a quick but absorbing read.