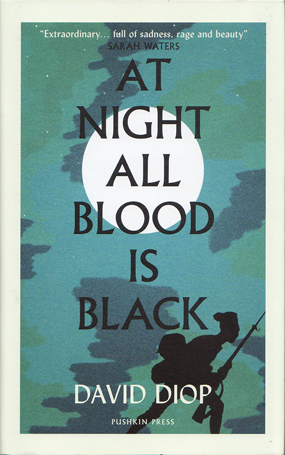 At Night All Blood is Black
David Diop

Translated from the French by Anna Moschovakis 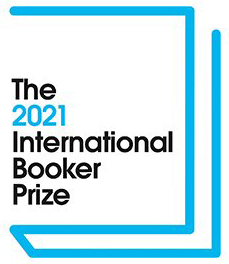 At only 145 pages (less if you subtract blank pages between chapters and blank half-page headers for each chapter) At Night all Blood is Black would seem to be a slight read with a simple narrative. The story, itself, is not complex, but upon finishing this novella there is a sense that there was so much under the surface: that not only was there a subtext yet to be grasped, but elements of the story rang like an echoing bell, with each iteration of the returning clamour transforming what you thought you heard; what you thought you read. And this feeling is only inflamed by the narrative voice: “I am assassin and judge. I am the sowing and the harvest. I am mother and daughter. I am night and day.” This dissonance reflects the instability of the narrator’s sense of identity. It also helps to foreground the problem of translating to the reader a sense of identity. The problem is highlighted, also, by the problem of translation, itself, for anyone reading this novel in anything but its original French:

The translator hesitated, intimidated by the angry, worried looks being shot his way. He cleared his throat and answered the uniforms in a small, nearly audible voice:

“He said that he is both life and death.”

When you read this book in English, as I did, it is not possible to tease the thematic problems of identity from the meta-textual context of the translator’s work. We become aware of word choices, the use of narrative technique and different genres to create this text, and to draw us into the narrator’s mind. This, then, is a novella that immerses us in the horrific circumstances of war, perhaps even madness, but never allows us to separate our emotional and intellectual response.

The story is simple enough. Alfa Ndiaye and Medemba Diop, two young Senegalese men who have grown up together, join the army and fight for the French during World War I against the Germans. Alfa and Medemba are friends, but they consider themselves as more-than-brothers, since they have chosen each other and are fiercely loyal. The novel opens with the horrific death of Medemba. He suffers a terrible abdominal wound on the battlefield, blowing out his organs without immediately killing him. He begs Alfa to slit his throat and end his suffering. But Alfa cannot kill his more-than-brother, and so is haunted not only by his friend’s agonising death, but a belief that his own actions – his joking taunts – have made Mademba reckless on the battlefield, leading to his death. Alfa develops a strange response to his sense of guilt. He slips out of his trench at night and creeps towards enemy trenches, or plays dead on the battlefield, so as to entrap German soldiers whom he disembowels in a horrible parody of Mademba’s wounds. He then returns to his own trench with the dead soldier’s gun and a severed hand as trophies. Alfa’s focus has slipped from fighting the war to seeking these terrible, single revenges. And while his fellow soldiers might laugh and praise him the first three times he does it, they are disturbed after his actions draw a terrible reprisal from the Germans upon another French soldier. Is Alfa inhabited by a terrible spirit, a dëmm, devourer of souls, as some of his fellow Senegalese soldiers believe? Or has he simply gone mad? His commanding officer, Captain Armand, a man in love with war, himself, is concerned. Captain Armand is a man who thinks of war as a capricious woman. He is a man who makes love to war. Does he see Alfa as a rival or is he merely pernickety when it comes to the rules of war? The black Senegalese soldiers are used as cannon fodder, expected to act like savages and terrify the enemy when a charge is on, but when they return to the trench, they must turn off the monsters summoned from within. The army only wants men of temporary madness. Is this possible? For Alfa, it is not, and he now inspires fear in his fellow soldiers.

The imagery and backstory of this slight novella suggests terrible possibilities, about how fragile our unified sense of self - our identities - are, and the nature of war. A recurring motif is the notion of inside and outside: inside a body and outside; female and male, the vagina and penis, which sometimes equate with trenches and attacking soldiers as a strange sexual parody. Trenches gape in the landscape like the female vulva. Alfa is often described as a mamba snake, slithering towards an enemy trench. And if men can die in trenches, they can also be born from them, as something new; something like Alfa. There is also soldiers who have their insides blown out by artillery or torturously torn out by Alfa. The vagina is not only a sexual organ but a channel to the guts. Bodies can be torn open and infiltrated during sex or battle, and identity is as febrile as the body is vulnerable. The imagery of sex is so ambivalent, between violence and pleasure, that you begin to wonder at the atavistic needs that drive men to kill, or even to take pleasure in it. Is it any wonder that Alfa compares his first orgasm inside a woman with the way exploding artillery wrenches his guts?

The experience of reading this novel is both horrific and fascinating. The details about war seem realistic but it is always difficult to know what Alfa’s mental state truly is. There is a dreamlike quality to the writing. At times it reads as a realistic recount of Alfa’s experiences. At other times it reads as a fairy tale or myth, working at the level of metaphor for the loss of Alfa’s own sense of self, if not his life. Diop draws on legends and beliefs from Sengalese culture, uses stream of consciousness as a representation of Alfa’s confused state, as well as the fairy tale genre to engage readers in what is, essentially, a story about war and identity.

This is a novel to read quickly and then to contemplate. Every aspect of the narrative invites thought. How important are women for men’s identity? Does Diop’s representation of identity extend as a metaphor to French colonial repression of Senegal? (Alfa does not speak French, only Wolof, yet French is the official language of Senegal. Diop speaks in an interview about the difficulty of capturing his voice in French, and then the translator’s difficulty of translating the voice into English) How does the fairy tale that ends the novel relate to Alfa’s sense of self, and can it really be explained as a simple binary problem of identity when the book seems to reject this as too simplistic? It would be a great book for book groups because it is so quick and easy to read, yet offers so much to talk about. I even wondered at the author’s decision to give his own surname to Medemba. I tried to find out whether David Diop had a brother. I began to read a biography of the Senegalese poet, David Diop, only to discover he died in 1960, the year of Senegalese independence from France. David Diop, the Senegalese novelist, I then discovered, was born six years later in 1966. Even in this, it seemed, there was no simple answer. I stopped wondering about Medemba Diop. It didn’t matter. The novel is a myth; a fairy tale; a poem. It means what it is, and what it is, is powerful, confronting and absorbing. Certainly worth reading and reading again. Hopefully, it will have some luck when the International Booker Prize is announced next month. 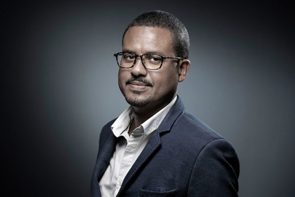 David Diop, 1966 -
(Not to be confused with David Diop, Senegalese poet, 1927 - 1960)
. . . I know, I understand, I shouldn’t have done it. I, Alfa Ndiaye, son of the old, old man, I understand, I shouldn’t have. God’s truth, now I know. My thoughts belong to me alone, I can think what I want. But I won’t tell. The ones I might have told my secret thoughts to, my brothers-in-arms who will be left so disfigured, maimed, eviscerated, that God will be ashamed to see them show up in Paradise and the Devil will be happy to welcome them to Hell, will never know who I really am. The survivors won’t know a thing, my old father won’t know, and my mother, if she is still of this world, will never find out. The weight of shame will not be added to the weight of my death. They won’t imagine what I’ve thought, what I’ve done, the depths to which the war drove me. God’s truth, the family honor will be spared, the honor of appearances.
At Night All Blood is Black, opening paragraph