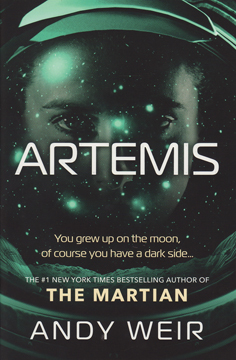 Andy Weir’s new book Artemis has many of the same elements as his break-through bestseller, The Martian. Like The Martian, it is set off-world, this time on the Moon. The novel’s scenes and much of its plot is also based around real science. Weir, a software engineer and devotee of space and science, uses his knowledge for convincing world building that covers everything from how the outer shells of the city of Artemis were constructed, their safety features, how the city is supplied with oxygen and how this has been achieved in tandem with its economic interests (oxygen has been produced as a side product of aluminium smelting), to interesting bits of trivia that give detail and richness to his world. For instance, Artemis’s atmosphere is kept at 20 per cent of Earth’s air pressure, since the removal of gas elements like nitrogen and argon, unneeded for human survival, allows for this reduced air pressure which takes strain off the city’s hull. This is the kind of detail Weir is good at. But he is also capable of adding another layer to this. If you’re an Earther visiting the Moon, you won’t like Moon coffee, since physics dictates that it tastes like shit. The lower air pressure means water boils at 61 degrees Celsius on the moon; too cold, apparently, for coffee drinkers from Earth.

And if you ever wondered what a tourist trap at the Apollo 11 landing site would be like, this is your book.

This time, however, Weir’s protagonist is a young woman, Jasmine (Jazz) Bashara. Jazz has lived most of her life on the moon after emigrating from Earth when she was a child with her father. Her father is a devout Muslim, a welder of extraordinary skill, who had had hopes that his daughter would follow in his footsteps rather than engage in illegal smuggling.

There is also a more diverse cast of characters in this book. Jazz has to deal with people like the city founder Fidelis Ngugi, Trond Landvik, an investor with shady business connections, Martin Svoboda, a nerd scientist who is instrumental in Jazz’s schemes, as well as more personal relationships, like her antipathy for Dale, a gay man who has had an affair with her boyfriend. Unlike Mark Watney from The Martian, who is for the best part of the story in contact with others through cobbled-together technology, Jazz’s only real relationship outside the moon is Kevin, with whom she has kept up a kind of pen-pal relationship for some time, but whose presence in her life also becomes vital.

Where The Martian was essentially a modern Robinson Crusoe story, Artemis is a heist novel. Jazz becomes involved in Landvik’s scheme to take over the aluminium industry. To do this, he needs to destroy Sanchez Industry’s four harvester’s, used to extract raw materials from the Moon’s surface for its aluminium smelting. Without the ability to produce aluminium, they will forfeit their contract to supply the city’s oxygen, which will give Landvik the opportunity to take over. As always in this kind of story, things don’t go according to plan and the initial premise of the plot is not the whole story. So, the plot is driven by action and the key characters’ ability to innovate, while the uncovering of the underlying motivations driving these actions forms a kind of hybrid detective story.

For me, I found the heist aspects of the plot most interesting. I think these worked because Weir played to his strength in this area by employing scientific and technical detail to heighten the realism of his world, as well as provide obstacles or solutions for his characters. This is what he did in The Martian. I found the criminal aspects of the plot – the unmasking of bad guys and their real motives – less compelling. This, in part, might have something to do with Weir’s characterisations, which are basic and uncomplicated. As a result, I cared less about why characters did what they did. I wanted to see what they would do and how they solved problems.

I think another weakness for me was that the stakes weren’t high enough. Some would disagree, since the conspiracy that Jazz finds herself in will affect the future of the moon’s culture and economy, and possibly the survival of its residents. But the opening of Artemis can’t compare with the simplicity and directness of The Martian: I’m pretty much fucked. Watney’s problem is clear and immediate for the reader. In comparison, Weir opens Artemis with an interesting enough scene – Jazz making a desperate return to an air hold after her space suit fails – but the scene serves to introduce the character rather than drive the plot, and this book is about plot. In fact, it takes several chapters to find out where the story is heading. Until then, the biggest problems Jazz faces are that she doesn’t have a lot of money and has to use a communal shower. Meanwhile, I was tapping my fingers, waiting. This hardly compares to the immediacy and danger of Watney’s abandonment on Mars. And while the reader may sympathise with Jazz's ambition to rise in her world, I think Jazz’s desire for a personal shower and larger accommodation are hardly as compelling plot drivers – as rationalisations of her actions - as Watney’s need to survive an interminable time alone on Mars with few resources while he awaits rescue.

Occasionally, I found my attention wandering from the story. This was always in sections devoted to character relationships and aspects of the criminal plot. Weir’s characterisations, for me, are fairly two dimensional and his dialogue cartoonish. Science, technology and how things would really have to work are where he is strongest.

But while this may be a strength, I found problem of my inattention was compounded because Weir does not consider the wider political or moral issues related to the colonisation of the moon. In other words, why should I care? Weir’s novel does not have the sophistication or scope of Robinson’s Mars trilogy, for instance, which has a strong understanding of the technical aspects of science and technology, but also considers the broader philosophical questions of colonisation and the potential for new kinds of government and society. Weir is content to let this aspect of his world remain vague. There are some rules and regulations involving safety, but the city seems to work by some quasi-anarchical understanding governing aspects of the lunar society, where a lynch-mob mentality might rule just as well as anything else:

But I didn’t know he was screwing a fourteen-year-old.

We’ve got people from all over Earth here. Different cultures have very different sexual morals, so Artemis doesn’t have age-of-consent rules at all. As long as it’s not forced, it’s not rape. And the girl was consenting.

But we’re not savages here. You might not get deported to Earth, but you’ll definitely get your ass kicked.

This may seem an adequate solution for a frontier town in space, but it is untenable in reality. And Weir relies upon the unregulated nature of Artemis as a kind of deus ex machina in his story’s denouement. The city’s laws fail to regulate inheritance or even the consistent application of justice. It feels like a blind spot in Weir’s world building. Having overcome so many technical difficulties, the ending seems a little too easy. It seems a sloppy way to resolve some plot points. As to the wider implications of something like the Outer Space Treaty, signed over fifty years ago and still in effect – despite the emphasis on business and trade in the novel – they are not considered. Weir’s science fiction is not speculative.

There would be some justification in a criticism of my assessment that points out that this is just supposed to be entertaining fiction, and that’s true. And it mostly is. But for me the book sometimes seemed like one of those toys you see buzzing about in those awful pop-up stores during Christmas, with their array of lights and noises and movements, but which require no input from a child to do their thing. This is a story to go along with for the ride, but don’t think too hard about it.