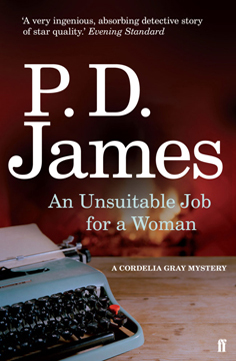 I enjoyed this story and found it a quick read, but it’s not going to rank as one of my favourite mysteries. Too much of the plot seemed just too convenient to be believable in any way. It just had too many problems for me to give it a higher rating.

The blurb on the back of my copy says that the main character is the first modern female detective in crime fiction. It’s mainly why I selected this book to read. I wasn’t sure I believed the claim, as I’ve read many mysteries with female detectives, so I did a quick google search. And it seems like the claim is true, apart from Agatha Christie’s Miss Marpl. Female detectives were thin on the ground until this book was published, and even after that, females tended to be amateur detectives, like Miss Marple, not professionals like Cordelia Gray, our main character here. Of course, soon after this book was first published, Angie Dickinson’s TV series Police Woman premiered, and since then we seem to have had a constant stream of attractive female detectives on TV and a regular succession of them in books, such as Kinsey Millhone in the excellent Alphabet Series. But Cordelia Gray seems to have been a bit of ground breaker, and a change for James who already had Adam Dalgliesh as her regular detective.

The main story line of this book strangely wrapped up with a few chapters to go, and seemed to come to a rather abrupt end. There were a few unsatisfying aspects to this story line that I didn’t think were adequately explained, such as why someone would hang a fake body from the ceiling. This didn’t seem necessary for covering up the murder or progressing the plot, it just happened, and later gets dismissed with one line of explanation. And too many of the plot points seemed too convenient. Was it realistic for Cordelia to move into the cottage? Not really, but if she hadn’t, we would have lost half the plot. And it was just way too convenient that she impulsively wore the belt Mark was hanged with one day, when she found she had a need for it? It was things like this that just had me rolling my eyes in disbelief as I read. If it had been more of a cosy style of murder these points wouldn’t have been so bad, but Cordelia was meant to be a professional.

However, the book didn’t end with the main story finishing; there was a small twist to mix it all up a bit. A twist incidentally which brought James’s better known Dalgliesh into the story. And again, this new aspect to the story just abruptly ends.

One thing I did really enjoy in this book were the descriptions of Cambridge. So beautiful and evocative, they made me want to visit and explore the town. But the book was written around forty-five years ago, so the Cambridge of the story is, sadly, probably not the Cambridge of today. I wonder if you can still punt peacefully down the river, or if these days you need to dodge jet skis?