Amphigorey is a collection of fifteen books, published between 1953 and 1965. In the short introduction, the author mentions that these books are difficult and often expensive to obtain, now, hence the compilation. That made me excited – this is going to be good, I thought.

Recently, I wanted to read something uncomfortable, scary and weird, and while looking at my bookshelf I stumbled upon Edward Gorey’s book Amphigorey and embarked on a spooky journey.

The fifteen tales are children’s stories on the surface, but the combination of subject matter and the unsettling images that accompany the writing make these stories appealing to adults, too.

The book starts with the story ‘The Unstrung Harp’, in which Mr. Earbrass writes a novel and we follow his life during the creative process. Gorey’s magic kicks in quick. We are introduced to various feelings Mr. Earbrass feels, which include anxieties, overthinking, hallucinations, lack of self-confidence and other uncomfortable states of mind. We follow the process of writing a novel – beginning, the middle, the end, the rewriting, and then a dreadful task of making a clean copy for the publishers. It’s a wonderful story of a writer's life.

Another story froze my blood: ‘The Hapless Child’. In this one we follow the life of a little girl called Charlotte Sophia. She had a good and happy life until her father, a colonel in the army, was killed in the African colonies. Her mother died of sickness and sadness soon after, and it only gets worse – her uncle gets killed by a brick and a family lawyer sends Charlotte to a terrible boarding school. From there on we follow the life of an orphan and are introduced to the emotions of loneliness and fear, and then everything culminates in the events of kidnapping and child slavery. This story truly shocked me and left me speechless and heartbroken.

The most famous story in this book is probably ‘The Gashlycrumb Tinies’. This is a quite unusual ABC story where we are dealing with 26 children who are dying in every horrible way possible. Some of the most dramatic scenes are: U is for Una who slipped down a drain, V is for Victor squashed under a train. Other objects or events causing death include choking, axes, lead, mice and leeches. Gorey really tried to make all this a little bit ‘funny’ through the use of rhyme, and unsettling with his eerie Dickensian images. Does he manage to do it? It’s funny, but it’s still terrible and dark seeing all those children dying.

This book is a pretty quick read as the stories are short – the books rely heavily on pictures to create atmosphere and convey character – so I suggest reading them one by one and stopping to contemplate. Each story is weird and creepy and it appealed to my darker side. Combine this with Gorey’s amazing pen and ink artwork and you are getting a bizarre and fun book that will make you realize that you are (probably) just a regular, every day, normal person.

A video adaptation of Edward Gorey's The Gashlycrumb Tinies
Widget is loading comments... 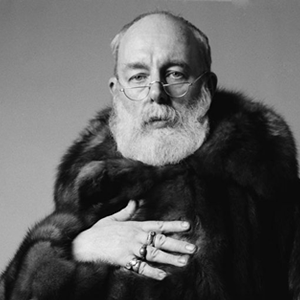 Edward Gorey
Edward Gorey is known for his dark humour and unsettling drawings that accompany his writing. In life he was a flamoyant personality often considered ahead of his time.

Edward Gorey's stories are short, relying heavily upon Gorey's illustrations to achieve their atmosphere. The text and illustratins complement each other, sometimes achieving a dark humour through their incongruous juxtaposition.

In the following illustrations you can see examples of the characters and their spooky settings, particularly in The Gashlycrumb Tinies, with the figure of Death shepharding innocent children. Watch the video adaptation of this ABC Book at the end of the review. 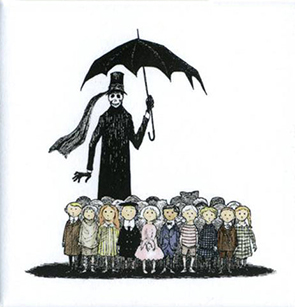 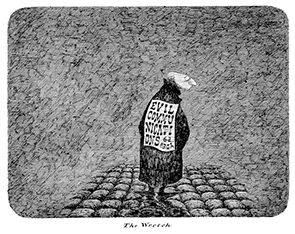 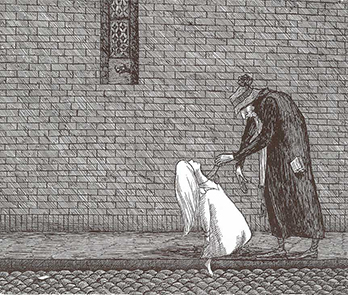