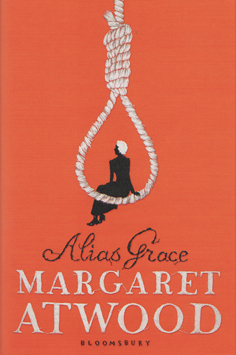 “That’s what I told Dr. Jordan, when we came to that part of the story” says Grace at the end of the first chapter of this book. Grace is in prison, for her involvement in the murders of Nancy Montgomery and Thomas Kinnear, and in this first chapter she is marching around the prison grounds, acting like a model prisoner and it seems like she is having a flashback to the day of the murders. Then we reach that final sentence, and realise that Grace’s memories and her stories are not necessarily reliable.

Is she an innocent girl, falsely convicted of murder? Or is she guilty, a manipulative woman telling the story she thinks the doctor wants to hear?

This story is a fictionalised account of a notorious murder which occurred in Canada in 1843. James McDermott, stable hand, was convicted and hanged for the murders, and Grace Marks was convicted as his accomplice. Her sentence was commuted to life in prison. At the start of the story, Grace has been imprisoned for fifteen years, since she was sixteen. Grace claims to have no memory of the murder, and has mostly been a model prisoner. She is trusted enough to spend most days working in the house of the prison’s Governor with little supervision.

A group of prominent citizens believe in her innocence, and are petitioning the government for her release. They hire Dr Simon Jordan, a young doctor from the US who specialises in the new field of psychiatry, to study her, to make a determination if her amnesia is genuine and an assessment of her innocence or guilt. The story shifts between Grace’s point of view (a firsthand account) and the doctor’s (told from a third person observer).

In modern crime stories we are accustomed to ending a story with an answer to the mystery, and this is mostly a neat solution that wraps up all loose ends. But that is not the case in Alias Grace. Grace remains an enigma to the doctor and to us, and we never know if she is lying or not. Attempts to judge this are made even harder by the lack of dialogue markers when we are focussed on Grace. It is hard to tell when Grace is speaking or when she is thinking, as the flow drifts from one to the other without a marker. It is easy to lose track as her words and thoughts blend together. A possible answer to the question of Grace’s innocence is given at the end, but even that solution hints that it perhaps was cooked up by Grace and Jeremiah.

As fascinating as Grace’s story is, what I really loved in this book was the development of Dr Jordan. His ideas and thoughts seem rigid and conventional at the beginning, but gradually we start to see his passions, and his moral decline. His story is engrossing as he struggles with his own demons and becomes more and more obsessed with Grace as he tries to maintain his scientific detachment as he studies her.

Before starting this book I watched the recent excellent adaption on Netflix. The mini-series was fairly faithful to the book, and I would highly recommend it to anyone. However, one area in which I now think it is lacking is in the portrayal of the doctor. The complexity of Grace in the television show is beautifully done, but the doctor’s struggles are only hinted at. I didn’t feel this when I watched the show. At the time I loved everything about it and was inspired to read the book because the story was just so well told. But having now read the book, I wish they could have spent just a little more time on the doctor.

Overall this is one of the most beautifully written books I’ve read in some time. The language is simply wonderful, from Grace’s coarse description of the bums of the ladies who visit the Governor’s wife as all delicate and white, like wobbly soft-boiled eggs, to the doctor’s more poetic description of his landlady’s lips as full, but fragile, like a rose on the verge of collapse. The story is engrossing, even if you are still left wondering at the end just what happened at the Kinnear farmhouse. Highly recommended.

A Preview of the television drama based on Margaret Atwood's Novel
Widget is loading comments... 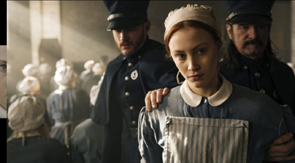 “When you are in the middle of a story, it isn’t a story at all, but only a confusion; a dark roaring, a blindness, a wreckage of shattered glass and splintered wood; like a house in a whirlwind, or else a boat crushed by the icebergs or swept over the rapids, and all aboard are powerless to stop it. It’s only afterwards that it becomes anything like a story. When you are telling it to yourself or to someone else”