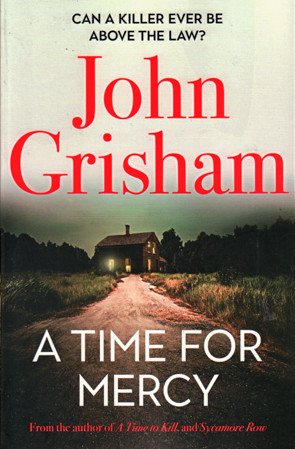 Crime books are one of my favourite genres, so it’s no surprise that I am a fan of John Grisham books. A Time for Mercy is the third of the Jake Brigance books, the first of which was published back in 1989: A Time to Kill. It was actually Grisham’s first novel, followed by a number of other series and standalone books. The second in this series was Sycamore Row, published in 2013, then this one, not waiting quite as long to be published as the first two. Although I read A Time to Kill many years ago now, it is still fresh in my mind, also having been made into a motion picture.

A Time for Mercy is set in one of the southern states of the US, Mississippi, and tells the story of a 16 year old boy, Drew, who kills his mother’s partner in the home in which they live. The victim, Stuart is a police deputy and naturally the community feels the boy should be committed for capital murder. Enter Jake Brigance, a local lawyer who is compelled by the local judge to take on his case, at least initially in the short term. Jake is embroiled in the middle of another big case which is taking much of his time, Smallwood, involving a railway crossing killing. He doesn’t feel he can do justice to both cases in the tight time frame, but nevertheless ends up leading both cases. As he gets to know Drew and his mother, Josie, and sister, Kiera, 14, and their domestic circumstances, he learns more information which when disclosed changes his view about how to approach the case. Sometimes information withheld till Close to the end of trial can have unexpected impacts.

The book expertly weaves together the two cases Jake is working on. Defending a mere child who has killed someone is no easy matter, but Jake continues to work through his defence often facing ridicule from many of his friends nearby.

For those who have never acted on a jury, as I now have three times, the book provides an interesting insight into the arduous process from selection to providing their verdict. As always, John Grisham provides an accurate description of criminal cases along with the personal experiences along the way which add to the experience of the book.

So, will Drew, the young man at the heart of the case be convicted or receive mercy? What things will influence the decision? And how will the trial influence Jake’s life in the future?

This was probably the best Grisham book I have read for some time. It was suspenseful, with a few twists along the way. Even with my juror background, it was never predictable or boring. I can thoroughly recommend this book.