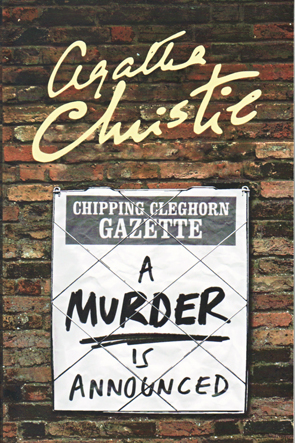 A Murder is Announced
Agatha Christie

A murder is announced and will take place on Friday, October 29th, at Little Paddocks at 6.30 p.m. Friends please accept this, the only intimation.

This announcement appears in the Chipping Cleghorn Gazette, the local paper on Friday morning. Friends of Letitia Blacklock, the owner of Little Paddocks, assume they are being invited to a murder game and turn up expecting an enjoyable evening. Letitia Blacklock is less than impressed when she sees the notice and suspects her young cousin Patrick is playing a joke. Patrick pleads his innocence, and the household is left in the dark about the notice. However, Letitia knows her friends and prepares for a small party, with sherry and cheese straws. The friends duly arrive, each awkwardly pretending that they have called in randomly, trying to not appear too eager for a murder game. No one is fooled!

The allotted time arrives and suddenly the lights go out. An intruder bursts into the room and demands everyone put up their hands. Shots are fired, panic erupts, someone finally manages to get the lights back on, Letitia has a slight injury (her ear is bleeding, apparently grazed by one of the bullets) and a dead body is found: not one of the household or guests, but the intruder, shot through the chest. His gun is on the floor by his side. It looks like he managed to accidentally shoot himself in the confusion.

But Detective Inspector Craddock isn't satisfied. He has a feeling something isn't right and that he is seeing what he was meant to see. But it isn't until he meets Miss Marple and gets her insights that the nebulous thoughts he has had start to clarify in his mind and he realises there is more to investigate here than a simple prank gone wrong.

Like most of Christie's books, there are some aspects of the book which will offend modern sensibilities. Christie frequently portrays her foreign characters in what would be an extremely racist manner if used in a modern book. In this book, this is mainly aimed at Mitzi, a middle European refugee who works for Letitia as a cook. Mitzi has a traumatic past, having watched at least one family member murdered in front of her by the Nazis, but is frequently ridiculed by the household for her hysteria and fear of the police. She is portrayed as a liar and is immediately suspected by the police merely because she is a foreigner.

There’s also some use of language that is slightly different to our current usage, epitomised by the use of the word ‘pussy’ to describe an older woman. No modern writer would attempt the following paragraph and expect their reader to maintain a straight face:

'Ye Gods and Little Fishes,’ said Sir Henry, 'can it be? George, it's my own particular, one and only, four-starred Pussy. The super Pussy of all old Pussies. And she has managed somehow to be at Medenham Wells, instead of peacefully at home in St May Mead, just at the right time to be mixed up in a murder. Once more a murder is announced-for the benefit and enjoyment of Miss Marple.'

Apart from the murder, this book explores the effects of the Second World War on England, such as changing social mores in villages. Everyone’s incomes have been impacted. Letitia’s shares, for instance, no longer provide the same returns she previously received pre-war. People who previously had large numbers of staff to run their households now struggle with only daily help. People have lost families, such as Phillipa, a war widow, struggling to raise her son alone, or Emma who was separated from her father in Europe and has no idea if he is still alive. Rationing was still a concern in 1950 when this book was published (it wasn't lifted in Britain until July 1954), and references are made in the book to suspect activity which must be kept from the police, such as the trading of eggs for butter between neighbours. But Mitzi situation represents the most extreme social impact of the war, forced to flee her homeland, with many in her family dead. She is forced to earn a living performing menial labour when she claims to be university educated.

In contrast to the treatment of Mitzi is the gentle portrayal of ‘Bunny’, or Dora Bunner, companion to Letitia. Bunny represents the impact of genteel poverty. She is an elderly lady who had been pretty and high spirited when a school girl, but never competent enough at anything to be able to earn a living. Now she struggles to survive on her old age pension. When Letitia learns of the hard times her old school friend has fallen on, she takes her into her own home as a companion, even though Bunny's muddling ways make things more difficult for her at times.

The changing world of post-war Britain makes it difficult for Craddock to investigate the crime. When he starts to unravel the threads, he finds it difficult to know who he can accept and who has a false background. As Miss Marple tells him:

‘Fifteen years ago, one knew who everybody was. The Bantry’s in the big house—and the Hartnells and the Price Ridleys and the Weatherbys … They were people whose fathers and mothers and grandfathers and grandmothers, or whose aunts and uncles, had lived there before them. If somebody new came to live there, they brought letters of introduction, or they'd been in the same regiment or served in the same ship as someone there already. If anybody new—really new—really a stranger-came, well they stuck out—everybody wondered about them and didn't rest till they found out.’

‘But it's not like that any more. Every village and small country place is full of people who’ve just come up and settled there without any ties to bring them. The big houses have been sold, and the cottages converted and changed. And the people just come—and all you know about them is what they say of themselves. They've come, you see, from all over the world … But nobody knows any more who anyone is. You can have Benares brassware in your house and talk about tiffin and chota Hazri—and you can have pictures of Taormina and talk about the English church and the library—like Miss Hinchcliffe and Miss Murgatroyd. You can come from the South of France, or have spent your life in the East. People take you at your own valuation. They don't wait to call until they've had a letter from a friend saying that the So-and-So’s are delightful people and she’s known them all their lives.’

‘…and partly because of that, the subtler links that had held together English social rural life had fallen apart. In a town now nobody expected to know his neighbour. In the country now nobody knew his neighbour either, though possibly he still thought he did …’

Craddock and Miss Marple have to untangle all of the false stories people tell about themselves and see behind all the false appearances to work out who is really who they say they are in this new world and, more importantly, who isn't. The solution to this murder turns on this point – the changing social fabric of Britain and its uncertain expectations – and it needs all of Miss Marple’s knowledge of people, backed up by Craddock’s research, to determine what has happened. This is a very clever murder and the solution manages to shock everyone, as no one has ever had any reason to suspect the murderer was anything other than as they claimed to be.

This is the type of book you read Agatha Christie for. It’s a classic puzzle with sleights of hand and clever misdirection. It’s well plotted and well-paced, and the clues needed to solve the puzzle are scattered throughout the story, albeit as very subtle clues that are easy to miss. But when you read the solution and go back to check, you realise it was actually spelled out for you, if only you had been paying better attention. 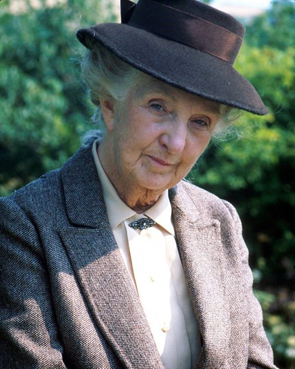 “Really, I have no gifts — no gifts at all — except perhaps a certain knowledge of human nature. People, I find, are apt to be far too trustful. I'm afraid that I have a tendency always to believe the worst. Not a nice trait. But so often justified by subsequent events.” - Miss Marple to Detective Inspector Craddock (page 101) 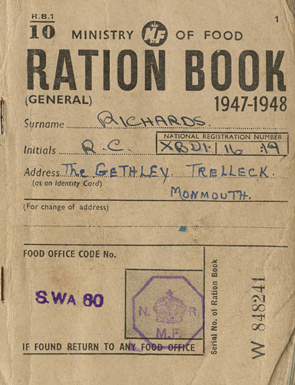 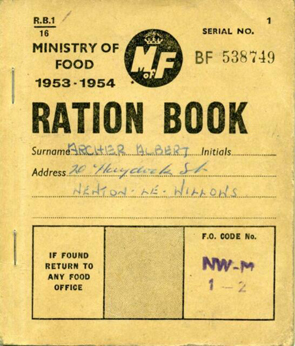 Rationing continued for nine years in Britain after the end of World War II. It officially ended at midnight on the 4 July 1954. These two ration books are examples from the post-war years of British rationing.