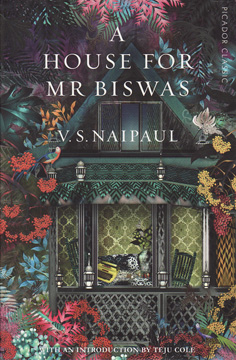 My enduring impression of this book has been, long after I read Naipaul’s In a Free State thirty years ago, that it is set in India. It is not. A House for Mr Biswas is set in Trinidad, an island off the coast of South America, in the period before, during and after World War II, where a large Indian population resides. At one point in the novel, Owad, the successful younger son of Mrs Tulsi, the matriarch of the family, states that he dislikes all Indians from India. He enumerates their failings which include their lack of intelligence, their poor Indian cooking, their strange Hindi and (without an ounce of intended irony, it seems) he claims they look down on colonial Indians. By this stage of the story Owad’s word is accepted with some reverence by the family and is irrefutable. He has been to England to gain medical qualifications and has lived an exciting life, associating with famous politicians of the era and flirting with communist ideology. While Owad is a minor character in the book, his attitudes reflect what many characters in the book are concerned with; status.

A House for Mr Biswas, as the title suggests, is about the long journey of Mohun Biswas to acquire a house, free of the depredations of his wife’s extended family, the Tulsis, who all live communally in a series of houses over the years. We are assured at the beginning of the story that Mr Biswas finally gets his house. But it is Mr Biswas’s journey that reveals much about his family and human nature; of the nature of acquisition, of ambition, treachery and jealousy. While Owad looks down upon Indians from India, his attitude is in the context of the personal struggle that all those in the family must face: the humiliations that are endured when others succeed, the jealousies and retributions when success comes your way. Mr Biswas lives in or acquires several houses through the course of the book. When Mr Biswas acquires a doll’s house for his daughter, Savi, for $25, an exorbitant sum, it immediately causes jealousies among the sisters-in-law, who berate their children and warn them not to go near it. The message is clear. By buying the doll’s house Mr Biswas has assumed airs for his family and his daughter is duly punished by being left alone by the other children of the house. Eventually, Shama, Mr Biswas’s wife, has to smash the thing if their daughter is not to become an outcast.

Houses represent security, status and family, but more so in this novel. Mrs Tulsi, who owns Hanuman House which first houses the large extended family, has the power to shape the lives of all who live under her. Alliances are made within the house, enemies are made, but it is Mrs Tulsi who has the power to grant a place to stay, as well as the power to sell and move, like her decision to move to the Shorthills estate. It is this position of power which allows her to send Owad oversees to study and thereby gain his exalted status and power upon his return. Meanwhile, Mr Biswas tries to build a couple of houses, all of which are susceptible to poor workmanship or the retribution of disgruntled Tulsi workers who see an easy scapegoat in him for their laying off.

What Mr Biswas lacks in this novel isn’t just security, but dignity. Dignity is associated with house ownership. Acquisition, whether it be a house or a hat stand, isn’t just a pragmatic undertaking, but is the employment of status as a form of warfare practised against other family members. To own a house is to be independent of another’s control and ideology; to own furniture is to set yourself on a higher pegging among the lower members of the family. For so much of the novel, Mr Biswas struggles for respect because he does not have a house. He is a man often in conflict with his extended family.

I think this is why so much emphasis is placed upon children in the story, from the highly successful Owad, to Biswas’s son, Anand, whose story to gain entry into a prestigious school is told, in comparison to a minor character, Vidiadhar, who is deployed by his family in the ceaseless struggle for family predominance, and fails. Children, like houses, represent success or failure, as well as the representation of a larger story beyond the scope of any one individual life. They represent status and progress.

The novel has the feel of a nineteenth century novel. The story is not driven by an unfolding narrative, since the story arc is revealed in the opening chapters. Rather, the story is episodic, narrating stages of Mr Biswas’s life and his struggle for independence. This is a character-driven story with many family members who enter and leave. In reading it we are immersed in Mr Biswas’s hopes as well as his petty hates and disappointments. It is easy to feel the injustices done to him. While he is sometimes mean or spiteful, he is also funny when he deflates the Tulsi family pretensions, and he is highly likeable.

Naipaul’s novel documents this period of social history in Trinidad in much the same way Dickens documented the working conditions of the English and delineated English types. Biswas, himself, is something of a Dickensian surrogate. He becomes a reporter for the Sentinel newspaper and aware of his own intellectual shortcomings, begins to read:

Then it was that he discovered the solace of Dickens. Without difficulty he transferred characters and settings to people and places he knew. In the grotesques of Dickens everything he feared and suffered from was ridiculed and diminished, so that his own anger, his own contempt became unnecessary, and he was given strength to bear with the most difficult part of his day: dressing in the morning, that daily affirmation of faith in oneself, which at times for him was almost like an act of sacrifice.

Like Dickens, Biswas begins to document the ‘grotesques’ of the Trinidad community through his newspaper column; poor people with stories to tell, encouraged to come forward with some promise of material reward. The irony is that Biswas lives in conditions not much better than those people whom he documents.

Biswas’s ambition reminded me of Dickens’s character from Great Expectations, Wemmick, as I read. Wemmick turns his little house into a castle, complete with moat, drawbridge and turrets. Wemmick’s house recalls the old maxim that a man’s house is his castle in the most literal way, but also represents the delineation between a man’s public and private personas. If Dicken’s could portray something of the English type through Wemmick, then Naipaul’s acquisitive characters also represent a wider aspirational culture of the Trinidad Indians. By the end of the novel it is clear that Trinidad has benefitted from the war, since it has brought the wealth of Americans to the island, so the struggle of Biswas and members of his family are also the struggle of colonial Indians.

To this extent, the novel reminds me of other post-colonial fictions set in the Realist tradition. Vikram Seth’s A Suitable Boy, for instance, reminded me of Austen in its telling of the private story of four families, but had something of the sweep of Tolstoy in the wider story of India’s independence. Naipaul’s novel also unashamedly reveals its colonial antecedents, but the scope of his writing, by comparison, is more insular. The history of colonialism is not overtly problematised in the novel. Religion is a source of some conflict. When he is a child Mr Biswas is declared to have an unlucky sneeze by the village pundit, and it is believed he will be an unlucky child. It seems this prediction is warranted when Mr Biswas is unwittingly responsible for his father’s death. Mr Biswas struggles with belief throughout his life – at times he is thought to be an atheist by his extended family – although towards the end he declares a willingness to believe in God. In between, he castigates Mrs Tulsi and her sons for their leaning towards Roman Catholicism. But the Tulsi’s drift from Hindi beliefs is also set against the attitude of Ajodha, Mr Biswas’s brother-in-law, who seems to disregard religion. But looking back, the Pastoral chapter at the beginning of the novel when Hindi beliefs seem dominant seems quaint and removed from the struggles that consume the rest of the story, like a time remembered but left behind. Other than that, the concerns and troubles of the characters seem parochial, notwithstanding the brief spark lit by Owad by his talk about revolution. The focus of characters is personal and pragmatic. Travelling overseas, English universities and the presence of foreign powers like America offer opportunities, which reflects Naipaul’s own personal circumstances, having benefitted from an English scholarship when he was 18. A House for Mr Biswas is a story about hope and betterment and it uses the novel form to express that aspirational hope, rather than focus specifically on the history that creates the conditions that creates the Tulsi family. Ultimately, it is a hopeful book, even if Mr Biswas’s hopes are never perfectly met, even if his death is unremarkable and virtually unremarked. It is hopeful in that it sees the progress of society through the lives of individuals, but understands progress as something owned by a community of people, too.

Ten weeks before he died, Mr Mohun Biswas, a journalist of Sikkim Street, St James, Port of Spain, was sacked. He had been ill for some time. In less than a year he had spent more than nine weeks at the Colonial Hospital and convalesced at home for even longer. When the doctor advised him to take a complete rest the Trinidad Sentinel had no choice. It gave Mr Biswas three months' notice and continued, up to the time of his death, to supply him every morning with a free copy of the paper.