An avid reader of our website (allow me to fantasise this creature into existence for my sake) would have noticed that the Reading Project seems to have been quiet for almost two weeks. We haven’t been posting reviews, it is true, maintained our Quote of the Week, progressed any of our long-term reading projects, nor posted regularly to this blog. But we have been busy.

I’ve just gotten through the worst of a long kitchen renovation (there are still several doors to be paint stripped and finished, not to mention the small matter of working out how to get the refrigerator back into the room, but let’s not mention that) which has given me little time to read, let alone update this site. Added to that, I’m planning on a second double review, which means I’m holding back a review I’ve already written for William Gibson’s The Peripheral. I’m currently halfway through Gibson’s sequel, Agency.

Toriaz has stalled on her current book due to work commitments which are taking up a lot of her time. WaywardWoman has also been busy, losing herself in the maze of games she has discovered on her iPad.

Personally, I plan to get the double review up early next week, and after that, I’d also like to return to a more consistent reading of The Count of Monte Cristo. All good intentions. We and our avid readers may fantasise that into existence.

I wrote in this blog at the beginning of last month that I had heard a rumour that our largest bookstore in the area, Dymocks at Penrith, was going to close. This is of interest to no-one else except if you live in my area, but it did make me think about the decline of bookshops over the last ten years. Sadly, the rumours were confirmed last night. I spoke to the proprietor of Dymocks who told me they will be closing shop after Mother’s Day next month, which is the 9 May in Australia. Their five-year lease is up and Heike and Trevor intend to retire, but they have not had any serious interest in purchasing the business.

The picture below was taken just over a year ago when I purchased The Mirror and the Light from Dymocks. It was just before we were locked down for weeks for Covid-19. Happier times! 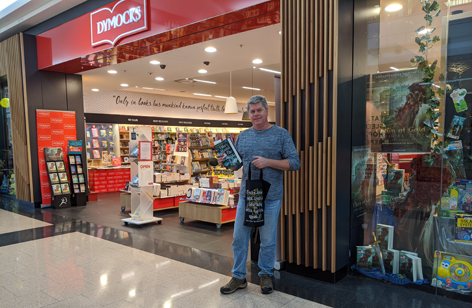 Book buying with my kids

I have three children. All of them were enthusiastic readers when they were young, but these days spend more of their time watching videos or playing computer games. Occasionally one of them will get interested in a book again, like when my youngest got obsessed with the Rick Riordan books last year, but it's rare. So, it felt strange to take this photo on the train home on Sunday.

My eldest daughter (Raven, listed as a one-time reviewer for this site) needed new pointe shoes. The others came along when I offered a visit to Kinokuniya after we'd finished at the ballet store. Kinokuniya is one of the three large bookstores in the city centre, and has a huge range of manga and graphic novels. The offer of allowing them to pick up some new manga was enough to entice even the most reluctant shoppers to come along on the long trip. Each of them left the bookshop with a bag of books and each of them started reading on the station as we waited for our train, eldest and youngest with their manga and Raven with one of her new books on mythology. I thought I could take the photo without any of them noticing, but my eldest spotted what I was doing.

I awoke this morning to happy news. That “critically unknown and once and future king of all zines has sent out a rocket into the night sky” – or early morning sky, like I said, if you live in Australia. That’s right, Issue 3 of Ear Rat Magazine is finally here, produced by Strange Crust, otherwise known as Hasty to the Reading Project, an occasional contributor. Check it out by clicking on the image below!

I finally got back to reading The Count of Monte Cristo yesterday. Toriaz told me a person she speaks to on social media had started to use my summary to help her through the book, but I'm less than halfway through, myself! Time to get a move on, I think.

Earlier this month I wrote a blog posts about a local bookstore, Dymocks, closing.

I went to Dymocks last night and spoke to Heike and Trevor, the proprietors who are retiring next month. I told Heike that I’d written a blog post about the bookstore closing and she told me that it may not. She is still hopeful that some negotiation – she didn’t give me specifics – will see the bookshop remain open for business. It would be great if that happens, since Penrith doesn’t need yet another fashion store.

I asked Heike and Trevor would they pose for a picture with me for this blog post. They happily agreed. They’ve been good to me over the years, and I thought it would be nice to get a picture with them. 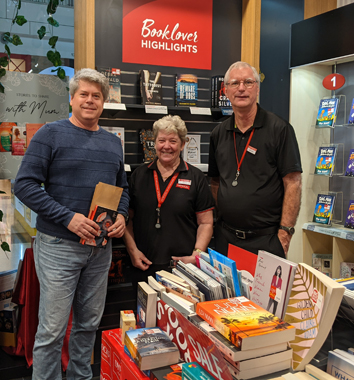 All the best for your retirement and here’s hoping Dymocks Penrith will indeed stay open!

(And apologies for how bad I look in photos when I smile!)

Can Reading Good Books Extend Your life? (No)

Toriaz likes to do those lists where you mark off which books you’ve read. They appear to be a thing on social media. The other day I was dropping off donations to St Vincent’s de Paul, culled from our kitchen renovation, when I spotted a book, 1001 Books You Must Read Before You Die, that had been left in front of the charity bin. It had been badly damaged by the rain and was mouldy. Many of its pages would need to be prised apart, all of which made it unsaleable. So I took it home and worked my way through, separating the pages as best I could, tearing many of them, especially in the second half of the book. But in a while I was able to make a tally. A few days later when I saw Toriaz I gave her the book and she did the same thing.

These are our results:

For me to finish this list of 1001 books before I die I will need to live until I am 135 years old, assuming I started when I was twenty and my reading rate of books for this list remains constant. Things are sweeter for Toriaz. She is going to be kicking around this planet until she is 425 to get this done.

It’s a good reminder to just read what you enjoy when you're reading for enjoyment. Life is too short!

I was preparing to begin a new review this morning when I heard that Jim Steinman had died. I know many people of consequence die, but Steinman had a place in my heart. His music was a guilty pleasure and was an unexpected creative inspiration for me when I was younger. For those who don’t remember, he wrote all the songs on Meatloaf’s Bat Out of Hell album, wrote and performed his own album, Bad for Good, and penned other Meatloaf albums including Dead Ringer and Bat Out of Hell 2. He also wrote for Air Supply, Bonnie Tyler (‘Total Eclipse of the Heart’ ) and Celine Dion.

I guess he wouldn’t be considered cool now, but his lyrics were powerful and funny, and his compositions complex and Wagnerian. I just wanted to acknowledge his passing.

And since I have a rule that all posts here have to be related to books in some way, you can read my review on Mick Wall’s biography of Meatloaf, Like a Bat Out of Hell, a book that couldn’t help devoting as much space to Steinman as its purported subject, since Steinman played such a pivotal role in Meatloaf’s career.