Street Libraries have been the subject of our blog over the course of this year. Now, the Blue Mountains City Council, responsible for the area where we live, is funding street libraries to be designed and located by kids throughout the mountains, with the cooperation of the local Mens Shed, as a literacy initiative. I’m not sure what the policy would be for councils in other areas of the world, but this seems like a good idea. If you’re interested – you may wish to contact your own council to see if this is viable in your area – you can read an article about it here.

I haven’t been to Sydney since late May this year due to the COVID-19 situation. But things have been going well here – we often have no new cases in a day, sometimes only one or two that can be accounted for – so it seemed a good opportunity to look for some books I have been wanting.

Earlier in the year I purchased all Tove Jansson’s Moomin novels, and I am slowly making my way through them. I read about half the novels when I was a kid and loved them. This time I was looking for Jansson’s picture books. I had already purchased and reviewed The Moomins and the Great Flood a few months ago. This time a managed to find The Dangerous Journey (I earlier purchased a jigsaw puzzle based upon one of the pictures in this book) and Who Will Comfort Toffle? Of the picture books, this leaves only The Book about Moomin, Mymble and Little My, which I have now ordered from England. It’s due early December. I also purchased Tove Jansson’s autobiography about her childhood, Sculptor’s Daughter, which I first saw a few years ago in the Sydney Art Gallery.

I’ll try to get one or two more reviewed before the end of the year. 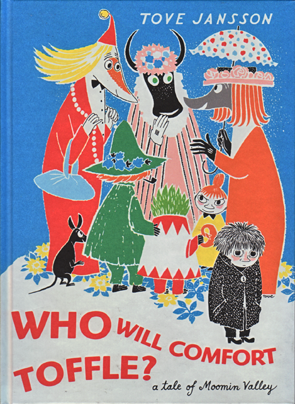 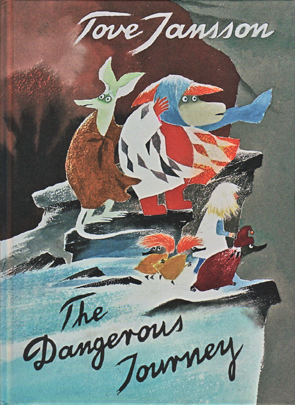 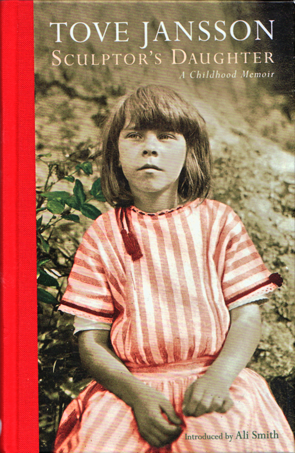 October 2020 is the 100th anniversary of the publication of Agatha Christie’s first crime novel, The Mysterious Affair at Styles. It is also the introduction of the iconic Hercule Poirot, this being the first of 33 novels he appeared in. Strangely, Christie couldn't get a UK publisher, and it was first published in the US as a serial from February 1920, then as a book in October 1920. UK publication later came in January 1921.

It's not my favourite of Christie’s books, but it is a great tale, with extremely clever plotting and misdirection. It’s a great introduction of Poirot’s powers of deduction. It also introduces Captain Hastings, Poirot’s loyal but slightly dim-witted offsider.

I found this link to an article which features a collection of various covers used over the past century. There are a few spoilers for the plot in the article, but the pictures of the different covers are worth looking at, to see changes in how the book was marketed. Some of them are great, others make you wonder what the designer was on.

I found two copies of the book on my bookshelf but I'm sure neither of them is the copy I first read as a teenager - one has the label from a recently closed local second-hand book shop and the other is from a boxed set of Poirot novels I bought only a few years ago. 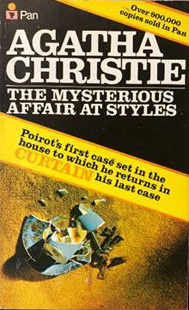 This is the one from the local shop. I thought this cover was strange with its reference to Curtain, Poirot's last case. Then I realised it was printed in 1975, the year that Curtain was first published. The publishers were obviously keen to promote the back catalogue along with the most recent, and very last, Christie novel. It's not that attractive a cover. 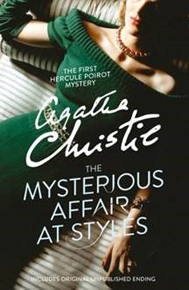 This is the one I bought fairly recently. This edition was published in 2013 and I think is visually much more appealing. But who is the woman depicted on the cover? It would be easy to say she is the victim, Emily Inglethorp, but Emily is described as being in her 70s, so it doesn't seem likely that it is her. The article linked above makes an observation that some of the covers were more about using an eye-catching image rather than an accurate depiction of the story. Like these two: 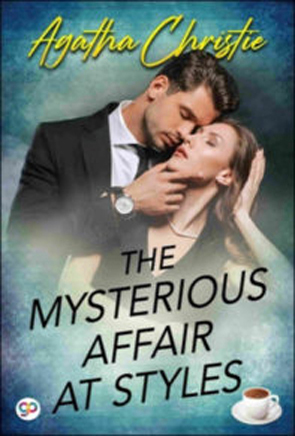 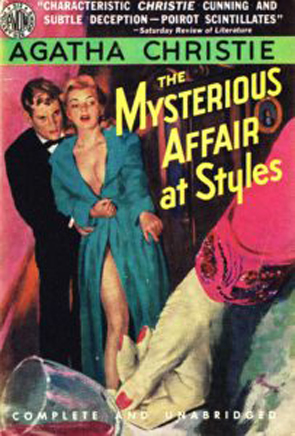 Either sexy or romantic, both seem to take their cue from a misreading of “mysterious affair” in the title, I guess.

Back in August I decided to make a list of books to be read and their order for the rest of the year. I posted the list on my reviewer page, and so far, I have kept to it. But having just read and reviewed Joyce Carol Oates’ latest book, Night. Sleep. Death. The Stars, a long book of almost 800 pages, I decided I wanted to read something short that wasn’t on the list. So, I selected four shorter books to consider. About the same time, Toriaz sent me a picture of back burning that was currently being done in the bush directly behind her house. We live in the Blue Mountains, Australia, so back burning is important to help control fire hazards during Summer. It looked rather dramatic. And it helped me choose my next book from the shortlist of books I was considering. I think the pictures tell the story: 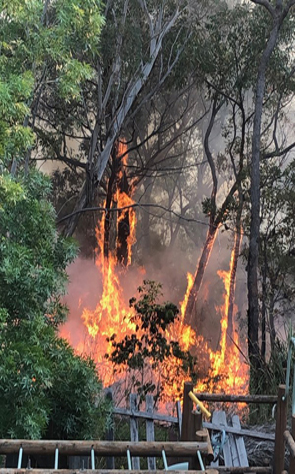 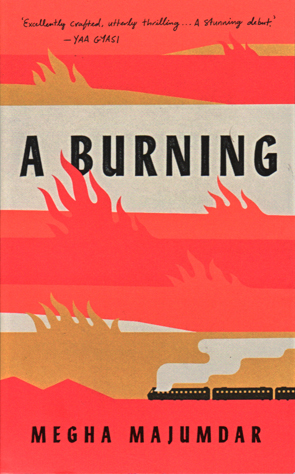 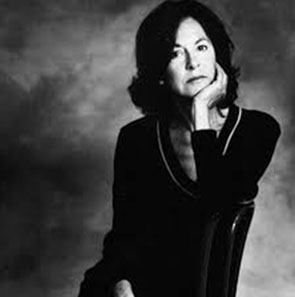 The 2020 Nobel Prize for Literature was announced on 14 October 2020. Louise Glück is the winner. Louise Glück is an Americal poet and essayist. In awarding her the prize, the Nobel committee praised her “unmistakable poetic voice that with austere beauty makes individual existence universal”. She has received numerous literary awards over the years and was the Poet Laurate of the United States from 2003 - 2004.

A garden with a reading theme!

This morning I took a trip up the mountain to look at a pot place I’ve never been to before, as well as to drive back down to Penrith to consider more plants for our front garden.

Immediately upon entering the pot place I saw a statue of a boy reading. As I wandered about, I discovered there were a few statues with children reading. Without believing in fate, it all seemed fated. Three statues later, it was time to head home before visiting the nursery, Flower Power, in Penrith, to buy a few more plants. Many more to come. 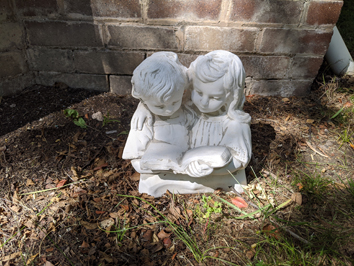 I’ve used this statue of a boy and a girl reading near the corner of the house, a place I’ve never been able to get anything to grow. 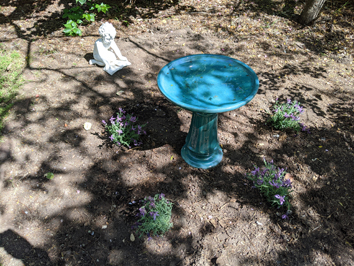 I installed this bird bath two days ago, along with the lavender surrounding it. The little boy on his knees reading was another of the purchases from this morning.

Here’s a closer look at the boy reading: 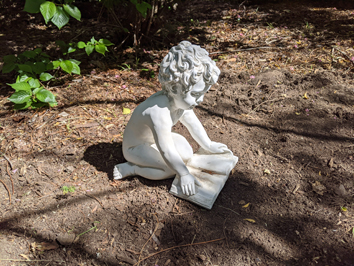 This final statue was my wife’s idea: 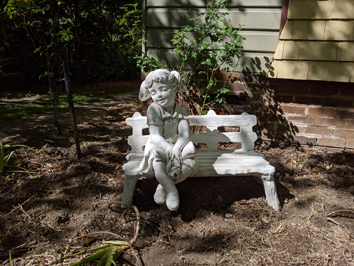 If you look carefully, you can see the girl on the bench is also reading. I’ve placed this one in a garden bed I just started turning over yesterday. This was the spot that had a good number of agapanthus that are now gone. The statue will have to be moved this week as I remove weeds and old roots, prepare the soil and eventually plant another garden. Hopefully, by next Spring the girl and her bench will be surrounded by flowers.

Meanwhile, I haven't been getting a lot of reading done. I'm hoping to get a review for Joyce Carol Oates's Night. Sleep. Death. The Stars completed by the middle of the next week.

A moment alone in the shade

I woke up this morning aching all over. For the past week and a half, I’ve been working in our front yard after several years of neglect. A stand of agapanthus had been taking hold in one section. A new garden bed needed replanting. There was weeding to be done. A tree had died and needed taking out, along with a few unwanted smaller trees in one corner. All needed their stumps removed. I got out two of the four stumps yesterday afternoon. Which is why I feel so wrecked this morning.

As a result, I have been doing much less reading or work on this website. Like an old man, I’ve been falling asleep in my chair and waking up late in the mornings.

All this, strangely, reminded me of Washington’s song in Hamilton, which quotes Washington’s letters (which in turn reference the Bible): “Everyone shall sit under their own vine and fig tree / A moment alone in the shade”. I guess I imagined myself in my dotage, sitting alone in a corner of the garden, dribbling, my head nodding into a book: not worn down by the pressures of leading a victory against a foreign power, only the foreign menace of weeds in my own garden.

In preparation for my geriatric torpor, I’ve been considering the idea of a garden bench to put in a shady part of the yard. I have two old ones in the back garden which seem a little rickety now, much how I currently feel. I saw a metal bench for $109 at Bunnings, but it didn’t quite have the look I wanted. I saw a beautiful bench at Flower Power, but at $600 I’ll have to consider how much reading I will actually get done in the shade. Perhaps more on this later.

More on the Street Library

Last month we featured a photo gallery in this blog showing the installation of Toriaz’s street library. Not content to leave it at that, Toriaz has started to pretty up the site after I left it with a plug of concrete at the base of the supporting pole. She's added a log to sit on and a decorative bunny, soil and rocks, Thyme creeper and a suspect-looking porcelain cactus. She sent me this photo of her progress: 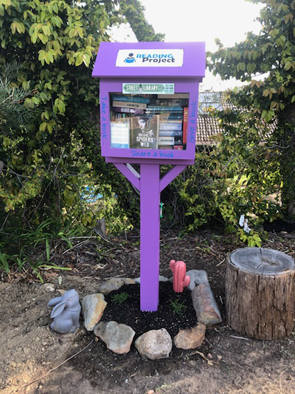 In other news, our site just exceeded 200 MB over the weekend. By my calculation, it would take us just under 19 years to reach the 1 GB limit imposed on free Neocities hosting. That’s a pretty generous amount of space! Thank you Neocities!