Finally got a copy of Milkman today in Penrith, of all places. (The Penrith store tends not to stock much 'literary' fiction. The owner didn't even know the book was the Man Booker winner). I'm just over halfway through Nancy Isenberg's biography on Aaron Burr, so I will read and review Milkman after I finish that.

I went to Sydney yesterday to pick up a copy of Anna Burns's Milkman. I'd already looked for it in two stores closer to home. Unfortunately, the copies I saw when I was last in Sydney (when I considered buying it and then decided to wait) are all gone. I checked all three major book stores in Sydney. They have all sold their stock since it won the Man Booker Prize last week. I remember that the same thing happened when Vernon God Little won in 2003. One of the sales assistants offered to sell me his personal copy for $200. I wasn't that desperate. The following week the stores were restocked and I got it for the regular retail price. So, I guess I will just have to wait a week for Milkman.

Meanwhile, my reading of Aaron Burr's biography, Fallen Founder by Nancy Isenberg, is going slowly. We had a busy weekend and I got nothing read at all!

The Man Booker Prize has been announced for 2018 and the winner is Ana Burns for her novel Milkman. I am yet to buy the novel but I will try to pick it up sometime this week as part of our long-term project to read and review all the Booker Prize winners. But I somehow did manage to predict its win in my post of 11 October, even though I haven't yet read the book. That's two years in a row!

Two days ago I finished reading the only shortlisted Man Booker novel I will get time to read before the winner is announced next week. Last year I hadn't read Lincoln in the Bardo before it was announced as the winner, but I predicted it, nevertheless, based on its subject matter and its experiment with a polyphonic narrative. So far I've only been able to physically look at three of the books on this year's shortlist when I was last in Sydney - I think two were still unpublished here at the time - so predicting a winner this year will be even more of a guess than last year. Nevertheless, I'll give a prediction now and see next week whether I should have laid money on it. So here it is: Milkman by Anna Burns. I can't give a rational reason, except the feel of the language in the samples I read while standing in the bookshop. It's going to be a little embarrassing if Washington Black wins now, since that was the book I reviewed yesterday! 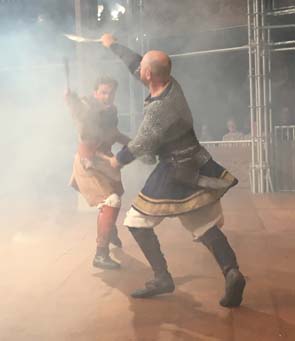 Last night we went to a performance of Macbeth in the temporary pop up Globe Theatre in Sydney. While not the real thing, it was a great to experience something of what Shakespeare's audience may have experienced in his theatre. It rained from time to time during the performance and naturally the groundlings got wet. (We were safely in the stalls). Mother Nature also seemed to be in on the act. As Lady Macbeth invoked the spirits to give her courage to do their bloody deed she threw her hands skyward and it began raining heavily on cue. When Macbeth cried out, his bloody hands raised to the sky,Will all great Neptune's ocean wash this blood Clean from my hand?, the audience couldn't help but laugh, since it was again pouring and Macbeth was at the edge of the stage, getting wet, the blood washing from his hands. And King Duncan, who was mostly in a wheel chair, entered Macbeth's castle by hauling himself up the steps at the front of the stage, finally landing in a puddle as he sat to stare back out across the audience to deliver his line: This castle hath a pleasant seat...

Eventually,the rain stopped. It was a great night.

Just over two weeks until the Man Booker Prize is announced for 2018. I finished reading Michael Chabon's The Amazing Adventures of Kavelier & Clay this afternoon, but I won't have that review up until later tomorrow. After that I might start reading the Man Booker shortlisted book, Washington Black and try to have that reviewed before the announcement.

In other book related news, Jean-Claude Arnault has been sentenced to two years' jail after a scandal involving allegations of sexual misconduct as well as his leaking the names of winners forced the Nobel committee to suspend the prize for literature this year. It has been announced there will be two winners next year.