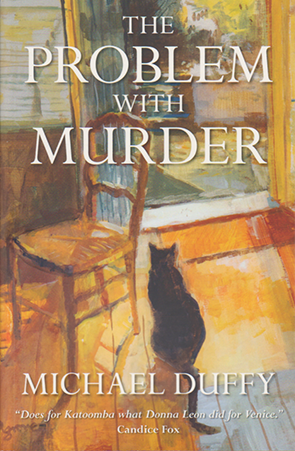 Note: Toriaz and I both bought our own copies of The Problem with Murder. Our opinions expressed in this review are independent of the author and publisher and the decision to include links for the book at the end of this review are entirely our own.


The Problem with Murder is set during the autumn and winter months in the Upper Blue Mountains, west of Sydney. Michael Duffy’s narrator, Bella Greaves, describes this season as a period of mist, fog and potential snow. Paul Ruel, who has gained a level of notoriety from his television appearances on the news as a Sydney detective, has now been transferred to Katoomba, a small-town police station serving the tourist community, where his career seems destined to die, after an ill-advised media appearance, not to mention the usual politicking of ambitious rivals. Paul finds himself on the outer with the local police and held somewhat in contempt for his big city credentials and semi-celebrity. When Michelle Mackerras, the wife of Paul’s retired predecessor, Brad, is injured in a car accident, Paul has an intuition that something is not quite right between Michelle and her husband, both widely regarded throughout Katoomba. Paul’s intuition encourages him to investigate one of Brad Mackerras’s former cases, Suzie Porter, who now awaits trial in prison for the murder of her partner. Paul’s suspicion that Suzie was the victim of domestic violence, a factor seemingly overlooked when her bail was refused, has personal and profession implications that will threaten the reputation of local police, particularly retired Brad Mackerras, and put Paul at odds with his new commander, Leanne Walton. Furthermore, his sense of isolation from the Katoomba force will push Paul to seek help from the only person he is meant to avoid as part of the terms of his new position: Bella Greaves, a journalist working on the local newspaper.

The Problem with Murder is a slow burn. It doesn’t have a shock and awe opening involving a horrific crime with all the seedy routine that that implies. Duffy trusts his reader to be patient, to follow Ruel’s initial curiosity about Michelle Mackerras’s accident and to see where that leads. He wants us to know his characters and the world they inhabit. As Ruel begins to uncover some of the town’s secrets the tension mounts, and we find that our patience is rewarded with a satisfying crime thriller, spiced with a suggestion of mountains-variety Gothic that imbues the story with ominous moral undertones.

If this sounds interesting, then well and good, but be aware that unless you live in the Blue Mountains, or are willing to take a trip up from Sydney, you will not be able to buy this book in your local bookstore. A note at the front of the book states The Problem with Murder, “is possibly the first novel to be available only at shops mentioned in its text.” In case you’re wondering, that’s only four bookstores in the Upper Blue Mountains, west of Sydney: Gleebooks, The Little Lost Bookshop in Katoomba (itself the subject of another blogpost), Megalong Books in Leura, and Lamdha Books in Wentworth Falls. Our curiosity over this decision was answered by the author, himself, after he read Toriaz’s blogpost: “The point is to keep it personal, and local. There are enough international books already!”

Which brings me back to the question of why someone might want to read this book in particular, given that crime fiction is such a well-stocked genre. First, is the obvious: you may wish to read a good book. Both Toriaz and I enjoyed this book. It’s well written, it has identifiable characters, there is an element of intrigue, as well as having what a good crime novel should possess: a level of unpredictability.

But I think, given that Duffy has made the local setting of the upper mountains an integral part of his story, and that he has limited its distribution to the area in which the story takes place, that the book also has two other specific audience appeals. If you’re local to the Blue Mountains, the idea of a local story is enticing. Americans or the English, for instance, may be used to having their cities written about and filmed. When I was in California, I remember thinking how familiar the place seemed because I’d already seen so much of it in movies. But reading about other places – Australia has many good authors but much of my reading is set somewhere else – involves an intellectual (I mean imagining a world with the mind through the text alone) rather than an emotional or near-tactile response to a story when there isn’t an attendant understanding of place and people that being a local affords. With that in mind I would recommend this book to locals not only because it’s a good book, but because they’ll get the way Duffy has used setting and atmosphere to enliven the tension of the story and elevate the moral questions raised by his narrative.

A second specific audience is tourists to the area, particularly overseas tourists who may want to sample something of the local flavour of the mountains. Besides reading a good book, it would also has the potential for a kind of treasure hunt, to track down many of the local places mentioned in the story. When we finished reading the book Toriaz and I spent a day in the upper Mountains revisiting many of the places mentioned in the story and were treated to suitably misty day for the right atmosphere. So, it’s a good souvenir, too.

And while the crime story is entertaining, my interest was most aroused by Duffy’s evocations of place, not because I intimately know many of the locations of the story, but because he transforms the Mountains into a universe which philosophically reflects the moral undertones of the community; a community in which children may be sexually abused, in which women may suffer domestic violence, even where murder may occur, yet where exists a veneer of respectability and civility. It reminded me of Conrad’s use of the Congo River in Heart of Darkness, as a representation of Marlowe’s psychological journey towards the madness of Kurtz and the darkness that lies within civilised hearts. Bella Greaves, Duffy’s narrator, observes that:

The experience of being in the area is not the typical human encounter with mountains, which, like tall trees and gothic cathedrals, draw the eye up to the sun and stars and notions of heaven and infinite space.

In the Blue Mountains though, people spend most of their viewing time looking down, not up […] The valleys are certainly impressive in their way, but as enormous holes in the ground, as expressions of emptiness.

Later, Bella observes, “Possibly human beings are not meant to live on the edge of such emptiness.” Like Marlowe travelling upriver, the nearness of this vast emptiness feels like the latent potential for humanity’s darker deeds. Indeed, Bella’s narrative recalls Nietzsche’s warning “Battle not with monsters, lest ye become a monster, and if you gaze into the abyss, the abyss gazes also into you.” This is not merely theoretical speculation: Bella’s insight intersects with the realities of crime and corruption in the town. The fog rolls across the landscape and obscures it in much the same way as lies and deceit conceal dark secrets. And good people – a detective like Paul Ruel, for instance – must find their own line between means and ends when looking into the abyss.

I think this is what makes this a good book, beyond it being an entertaining and highly readable crime fiction. There are moments in the book that offer a moment to pause and think.

As I read Bella’s unfolding account, for instance, I could not separate the reading experience from my knowledge of the localness of this book – of the author’s decision to limit its distribution – and its hints of the wider world in which we now live: divorced from the local, from the here and now; the Global. When Paul Ruel’s son and daughter come to visit him, he discovers to his dismay that his son, Sean, has stopped playing sport. Instead, he is engaged with a group of friends – meaning people he has never met and who live oversees – with creating a computer game. Sean is responsible for the physical layout of the world, “with two levels, plateau and valleys, with a number of steep railways the only connection between them.” As such, Sean is interested in the Scenic Railway (a former coal railway which has been long used to take tourists into the Jamison Valley) as an inspiration for the game, not in and of itself. It is details like this, added to details about the pressure the internet has had on industries, even on journalism as Bella Greaves has found, that seem to suggest the dark potential of a civilisation we have built which mirrors the emptiness of the wilderness beyond.

The Problem with Murder is only available in Blue Mountains bookstores but I thought to ask the proprietor of Lamdha Books whether that meant online sales to other regions were also limited. Of course they’re not. If you’re interested in obtaining a copy of this book, follow one of the links below:

In this, our first video produced for a specific review, I talk about Michael Duffy's book and show some of its setting, including the sometimes misty atmosphere of Katoomba that features prominently in the novel.
Widget is loading comments... 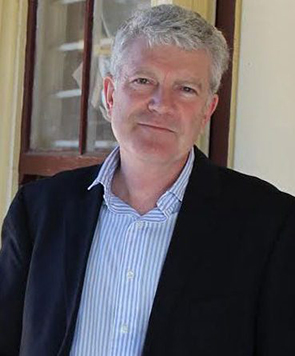 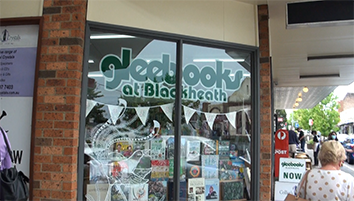 Gleebooks, Blackheath
We purchased both our copies of The Problem with Murder from Gleebooks. The proprietor told us it had been their second biggest seller over the Christmas period 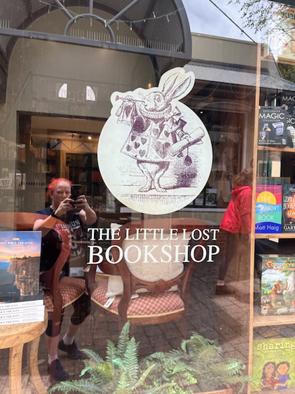 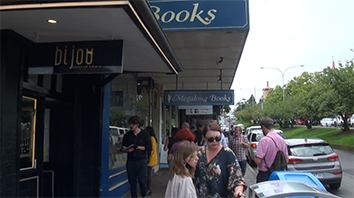 Megalong Books, Leura
Megalong Books has a good variety of books and is well situated in the main street of the tourist town, Leura 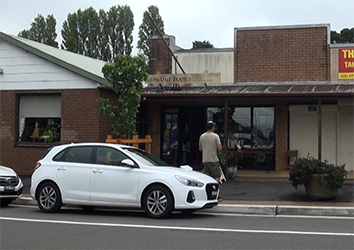 Lamdha Books, Wentworth Falls
While the facade of this little shop is understated, the quality of its range and the knowledge of its proprietor are impressive. 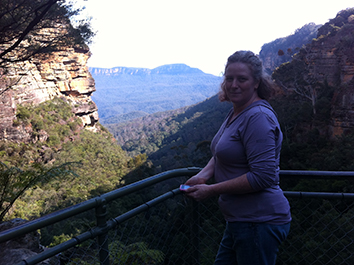 Toriaz and the Jamison Valley, Katoomba
Blue Mountains towns are built on top of the plateau so any foray into the bush usually involves a walk down at the beginning and a walk back up at the end. When Paul Ruel takes his children on a bushwalk, he observes that, "At the start when you are fresh it is downhill and easy. At the end, when your energy is fading, it turns mean and there are hundreds of upward stairs. This of course is the opposite of real mountains, where people climb first and descend later."
Alternatively, many tourists view the beautiful scenery from lookouts above the bush, as in this photograph of Toriaz, with the Jamison Valley beneath her.