About the New Year and Good Intentions!

Happy New Year everyone! At least, I hope it’s a better year than last year. As bikerbuddy pointed out a few days ago, last year had a few positives for the Reading Project. We’re hoping things continue to go well this year. 2021 is the beginning of the fifth year of this website.

Back in April I came to the realisation that I had a lot of books on my shelves that I hadn't read. I rounded up the ones I thought I would most like to read last year, took a photo and made a TBR list for the rest of the year. I got bikerbuddy to put my list on my Reviewer page. I started with a list of forty-eight (48). I predicted at the time that I might add a few(?) more to the list over the year, as I acquired more books. I ended up with ninety-seven (97) books on the list.

So now we’ve made it to 2021, how did I go with reducing my TBR pile? I managed to cross twenty-two (22) of the list. I reviewed most of these, but there were a couple I didn't feel like reviewing.

I also read a few books which weren't on the TBR list - what can I say, I'm fickle!

Twenty-two finished out of 97 (or even out of 48), isn't that great a result, especially since I seem to have added another 49 additional books to the initial list over the year. So, the net result is really -27 read!!! I have marked my report card as ‘must do better’.

What should I do in 2021? It seems pointless to maintain a TBR list with the intention of making it reduce in size while simultaneously allowing it to grow at more than double my reading rate. Do I want the pressure to be disciplined and actually reduce the number of unread books on my shelf this year when it proved ineffective last year? I've decided instead that I'm going to keep a running tally, with an opening balance for each year, a tally of books read, of new books added, and a closing balance at the end of the year.

The current book I’m reading isn’t on my TBR list (although I actually thought it was) and won't change the 2020 numbers. So, I'm closing off the 2020 count now. The books I got for Christmas and any I bought before the end of 2020 can go on the 2021 list:


I’ll get this running tally put on my Profile page in the next few days.

Visiting street libraries, including the former house of a famous Australian writer

New Year’s Day in Sydney was another wet one. We’ve had rain for weeks which has kept the temperatures mercifully low. With little else to do, we decided to check out a few more little libraries farther up the mountain in the morning, particularly this one: 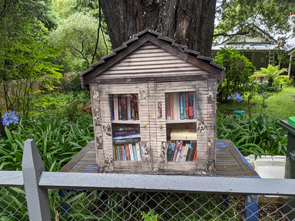 This library sits near the front gate of what was once Ethel Turner’s house. Turner was an Australian author who wrote Seven Little Australians, now considered an Australian classic. Turner did not live at this house when she wrote her book, however. The house’s current owner arrived home while we were inspecting the contents of his library and we had a brief talk. He explained that there are seven large trees behind the property’s fence, one for each of the Woolcot children from the novel. We counted and indeed, there was seven trees, although one now sits just outside the property in what looks like a narrow easement that was possibly fenced off some time ago, now overgrown and impenetrable. You can see six trees in this photo: 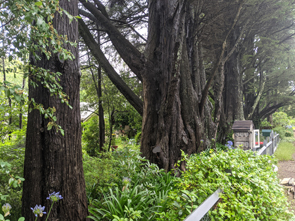 The owner recommended another library we didn’t know about a few streets away, and then we visited another two libraries after that. I took pictures of them too: 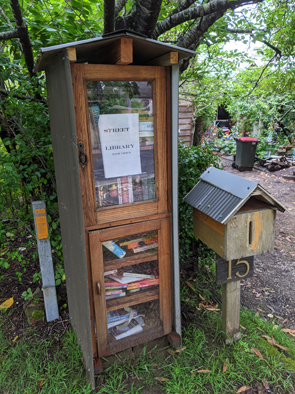 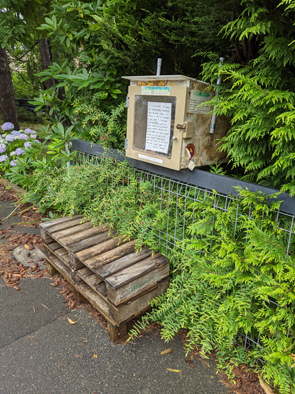 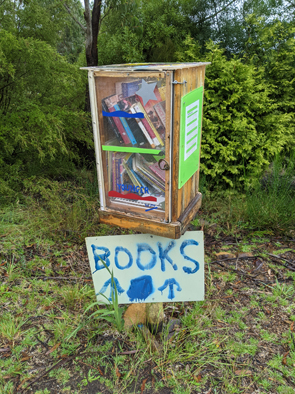 The second library had a note in its window asking people not to leave so many books because it might break the support it is on. It’s nice to know people are being generous, though. It rained lightly the whole time we were out, even though the weather forecast predicted no rain. It occurred to me that even before our December wet spell, it always seems to be raining when we look at street libraries. Thankfully, the four we looked at yesterday all seemed weatherproof.

I bought three books in Sydney yesterday, despite my massive backlist to be read. The first was Stalingrad by Anthony Beevor. I thought it would be good to read an historical account before I read Vasily’s Grossman’s novel of the same name. I also bought Boccaccio’s The Decameron, a book I’ve long thought to read. Seeing that we’re in a pandemic – Boccaccio’s book is about ten people telling each other stories while they wait out the Black Death – the book called me. Finally, I bought Jules Verne’s From the Earth to the Moon. I’ve previously reviewed Around the World in Eighty Days and Journey to the Centre of the Earth. I thought it would be interesting to read this book alongside H.G.Well’s The First Men in the Moon as a comparison. I know the fiftieth anniversary of the Apollo 11 landing was in 2019, but I only just thought to do this.

I’ve also got other projects weighing on my mind for this year. My long drawn out reading of The Count of Monte Cristo needs to be progressed. I’m enjoying it, but I find little time to do it. If I complete that, I may get back to another project I started but abandoned: reading Enid Blyton’s Famous Five series. I’ve already written a series of mini-essays for some aspects of the first six books, but continuing this project right now is too much to do, especially in the middle of some house renovation. Hopefully, I’ll be able to start making more progress after March.

I recently stumbled upon Read Christie 2021, an Agatha Christie reading challenge published by the official Agatha Christie website. It’s a simple challenge – twelve separate prompts which need twelve of Christie’s books fitted to them. I love Christie’s books, so I signed up for the challenge. I’ve already read my first book for the challenge - The Sittaford Mystery, one of Christie’s standalone mysteries, without any of her regular detectives. It starts in a tiny hamlet, isolated by a massive snow storm, so it fits for the prompt ‘a story set during bad weather’. It’s an amusing story with a clever solution and a few great characters, but I thought the logical leap to determine the murderer at the end was a bit of a stretch.

I’m going to try to read Christies I haven’t previously read, so I might end up reading a few extras if my initial choices don’t match any of the prompts. Next one on my list is Third Girl, one of the later Poirot stories. The Agatha Christie website will have suggestions for some of the prompts. They’re featuring a book a month to match each of the prompts. For January, they have gone with The Hollow, for the ‘set in a grand house’ prompt. 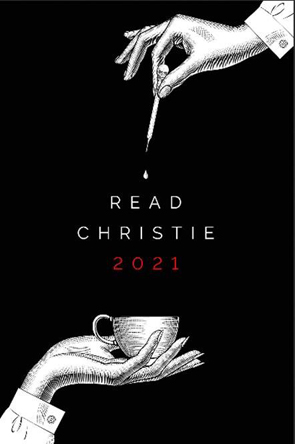