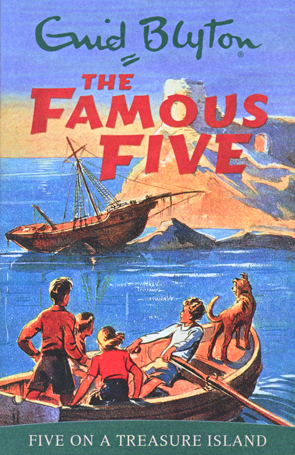 Julian, Dick and Jane visit their cousin, Georgina for the first time while their parents holiday in Scotland. Georgina is a “tomboy” who insists on being called George. She has a dog, Timothy, whom she hides from her parents because she is not allowed to keep him. George tells the other children that Kirrin Island, situated in the bay with its own castle, belongs to her family and her mother says it can be hers. They explore the island together and find a map with clues to a treasure when an old shipwreck is washed ashore. The children set about finding the treasure in the hope of turning around the fortunes of George’s family, but they must do it before a mysterious collector buys the island and seizes the treasure for himself.

Is George a Feminist hero?

Blyton’s books have sometimes received criticism for sexist, racist or overly nationalistic views. This first book in the series is interesting to consider the issue of sexism from the perspective of a modern audience, since of the two boys and two girls who form a part of the Famous Five (the fifth being Timothy their dog), it is the eldest female, Georgina Kirrin – who insists on being known as George – who is the most prominent and interesting character. The question as to whether she is a good role model for girls is not clear either way, and there are some points to be made for either case which would draw an argument.

For instance, George insists on adopting a boy’s name and refuses to answer to ‘Georgina’ or be treated like a girl, since she would rather be a boy. This is stated clearly and emphatically. For a modern audience this is potentially troubling, since one way of looking at this is that George sees no value in feminine traits or in her own sexual identity. It devalues women. However, one might also read George’s adoption of a male persona as an early understanding of patriarchal power. In the second book in the series, Five Go Adventuring Again, when she is being punished for her campaign against Mr Roland, their holiday tutor, George reflects, “Grown-ups were so powerful, and could dole out all kinds of punishments.” She may as easily have said ‘men’ as grown-ups, since she clashes with her father who acts as a proxy power for Mr Roland when George refuses to accept his authority. Women in the first two books are marginal characters, who cook, prepare food and defer to their husband’s authority. “Your mother is guided by me,” Quentin, her father tells her.

George’s expression of her own identity is not often as complex though. Girls like Anne like “frocks and dolls”. George can’t abide frocks and dolls. Anne, offended by George, tells George that her brothers are “real boys, not pretend boys, like you.” But George engages in activities that girls traditionally don’t, especially in the 1940s and Blyton’s depiction of the period. Apart from adopting a hairstyle and clothing in the style of a boy, George goes adventuring on nearby Kirrin Island and has learned to row a boat as well as a grown man, we are told. She rows better than Julian can, for certain. When Julian and George attempt to dive down to the wreck, George dives further and proves to be a better swimmer than Julian. Instead of dolls, George carries a pocket knife.

George inevitably bears the “tomboy” label for her looks and actions. It’s an old term now but it was meant to describe a girl who was a little bit wild, who liked to engage in ‘boy’ activities and play with boys. It had pejorative connotations, since there was usually an assumption that a ‘tomboy’ would grow out of her wayward ways with the onset of puberty and adopt an ‘appropriate’ feminine identity with the discovery of boys. At least, that’s how I always heard the term used. But George, like all the main characters in the story are pre-pubescent (except Timothy). Julian is the oldest at twelve-years-old. Like Dick, George is eleven. Yet she does not gravitate to Anne, who is the same sex, nor Dick who is the same age, but Julian, who by right of traditional patriarchal roles, should be leader of the group. Julian is the wisest of the children – at least he is depicted that way – and George the most hot-headed and angry, since she is most often thwarted over her sex. But it is Julian and George who are the joint leaders of the group. It is not until late in the story, for instance, that Dick has anything meaningful to do. The rescue he undertakes, however, is not for a damsel in distress, but for both Julian and George together, who have been trapped underground.

George’s age both simplifies Blyton’s depiction of her sexual transgressions as well as complicating our full understanding of the impetus behind her sexual identity. George is certainly a ‘difficult’ child in that she has a strong will and sense of justice, so she tends to argue and resist attempts to control her. And that might be an easy way to dismiss her. She is contrary. She adopts an identity that challenges authority. Yet with a growing understanding of more complex sexual personas –LGBTQIAP+ is a label now being used to underline the multiplicity of sexual identities – it is hard to know whether a girl like George from the 1940s was merely a ‘tomboy’ or would discover a more complex sexual understanding of her own identity as she progressed through puberty. Certainly, Blyton did not live in an era that accepted this complexity or had the language or the social conversation to make such an identity more explicit in her writing. Yet she chose to give George a non-traditional sexual role. Surely there is some progressive thinking here in attempting to provide a role model for her audience, even if she lacked the understanding and language of modern audiences.

Yet George, as the major character in this first novel, does undergo a transition. But it is not a change in her adopted male persona, even if she loses some of her prickliness. George’s character development concerns her attitudes to the other children and her ability to get along with them. Having dismissed Anne early in the novel as a typical girl, it is significant that Anne could feel that “George was getting nicer and nicer!” Anne feels this way because George agrees to sleep with Anne and comfort her on the island. Certainly, a more nurturing and therefore more traditionally female role. But George’s prickliness has been, in part, a matter of her being an only child and the need she has had of hiding Timothy from her parents, who have asked that she no longer keep the dog. Timothy is closely aligned with George and expresses her thought and feelings, often adopting her attitudes and moods, as he does in the second book towards Mr Roland. Just as George hates their tutor, Timothy will fetch everyone’s thrown stick but Mr Roland’s. At the end of this book, George is less testy when she is able to own Timothy openly – is this a metaphor? She also expresses a growing need for company and has an insight that “it’s good to share things”. While George undergoes changes, she remains ‘George’ and a ‘tomboy’.

So, George rejects traditional femininity and is negative towards feminine traits, which I can’t imagine a modern author writing (or publisher accepting). But Blyton was also writing in the 1940s as she began this series. Even so, when the climactic moment comes in this novel, it is George who takes the axe from Julian and strides down purposefully to the surf to smash in the bad guys’ boat. Blyton could easily have left Julian to do that. That’s why I think it more interesting to see what Blyton achieved with this character rather than dismiss her outright. Certainly, George’s depiction isn’t perfect by modern standards, but one gets a sense that Blyton was trying to create a strong female character by the standards of her time. It’s just sad that George felt she had to be male and dismiss femininity to do that.