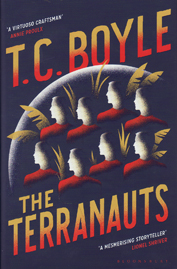 The Terranauts is based on an interesting experiment from the 1990s. I remember seeing it on the news and thinking what a crazy idea it was. Put a small group of people in an enclosed man-made ecosystem for two years and let them survive on the produce of their own mini-environment. The only detail I remember from the news reports of the time is that the experiment ultimately failed. After that, I hadn’t heard of the Biosphere 2 project again until reading T.C.Boyle’s novel. There’s also a propitious sense of timing in my reading, too. Only this week, Donald Trump has overturned some of Obama’s environmental laws that restrict the laying of oil pipelines and coal exploration. Trump has justified overturning these laws on the basis that they were an impediment to investment in energy technology. This, of course, is in the context of Trump’s ambivalence, to be generous, concerning global warming issues. America is prioritising its economy over environmental concerns at the moment.

There is a further interesting context in all of this. Steve Bannon, Trump’s chief advisor, was involved in Biosphere 2. Bannon was first brought in to audit the company after the project suffered huge budget blowouts. He was eventually installed as CEO. There is a dramatic story of two former biospherians breaking into the dome to warn the biospherians inside about what was happening, as they feared safety systems might be compromised in a bid to cut costs. This didn’t happen. Now, Bannon’s involvement in the project gives hope to some that he may yet moderate Trump’s opinions on climate change, while his detractors point to the heavy-handed means by which he secured the facilities against the former management and employees he ousted.1

Boyle’s story reflects many of the problems faced by the real Biosphere project: his biosphere, known as E2 (Earth 2) has difficulty in producing enough food; has problems with dropping oxygen levels and the rise in carbon dioxide levels; problems of attracting finance and the difficulty of maintaining a closed system, meaning that nothing can come in or out of the sealed dome. The book begins after the first mission’s failure to maintain a closed system, much like the real Biosphere project. The mantra of the second mission is nothing in, nothing out. In Boyle’s version of the experiment, the two-year stint undertaken by Dawn, Ramsay, Robert, Gretchen, Diane, Stevie, Tom and Richard is only the second of fifty that will span a hundred years. The missions have several objectives, although the long-term goal to prepare for a colony on Mars primarily drives the terranauts. Naturally, there are environmental concerns driving the experiment too, which was a key consideration of Biosphere.

What people didn’t realize was that the special gift of E2 was in presenting a possible world with an eye toward tweaking it over the course of a century to create an ideal one … at the end of a century we’ll see genetic variation that makes E2’s biota unique from anything else on earth. And of course, beyond earth – because from the outset, in G.C.’s vision, the big question was could we create an independent self-generating ecosphere to take us into space (or in the worst-case scenario, sustain life on this planet in the face of systematic worldwide collapse) (323)

While Boyle’s novel draws its inspiration from the 1990s experiment, he makes the story his own. The primary focus of the story is not scientific, even if the science and the technical issues the terranauts face form the mise en scène. Boyle concerns himself with the human experiment and the possibilities this situation offers. Four men and four women locked away from the world for two years. The sexual tensions, the relationships, alliances and enmities that arise from this state of affairs are easily assumed, and Boyle’s story indulges these speculative possibilities.

The tensions are most palpable in the narrative of Linda Ryu, one of sixteen finalists for one of the eight terranaut positions, but now forced to watch her best friend, Dawn, enter the air lock instead of her. Even when things seem to be progressing well at the beginning of the terranauts’ internment, Linda’s whining, bitter, vengeful tone is evident. She reminds us that science is not an entirely objective and emotionally dissociated endeavor undertaken for selfless reasons. Her ambitions and human failings are evident, as are the those of Jerimiah, or GC (God the Creator), who drives the project not only for the science, but money and publicity, or Judy, his chief aide, who is sexually manipulative for vengeful purposes.

And like their counterparts outside the dome, the terranauts themselves are motivated by their own ambitions, by personal animosities, by revenge and for desire. Central to the story are Ramsay and Dawn, each of whom share the narrating of the story with Linda. Dawn, desired by at least three of the men in the dome, and others outside, becomes the face of the project, much to Linda’s chagrin, and her decisions raise difficult moral and social questions which also put the integrity of the project at risk.

But there isn’t a character in the story who at some point doesn’t act questionably under the strain of the limited society, food and oxygen of E2, and the psychological strains that this entails. Whether it be in the form of unwanted sexual advances, petty thefts or even outright violence, the experiment continually reveals that the human factor must be considered in the science as much as anything.

As such, the human factor is the weak link in the utopian ideals of the experiment. Dawn, the most idealistically committed member of the terranaut team states we were pioneers of a new world and a new way of thinking. The pretensions of E2 are revealed in the language employed by the characters themselves, as much as anything. The terranauts attribute biblical epithets to their administrative overlords, and the biosphere of E2 is repeatedly portrayed as a new Eden, which will potentially avoid the environmental degradation of the outside world and surpass it. Yet there is a disconnect between this high-mindedness (and there is evidence it is not the over-riding tenet of the other terranauts, six of whom are not given a narrative voice) and the real pressures of the project which often brings the worst aspects of human nature to the surface. Dawn is the only character still committed at this idealistic level by the end of the novel, but her decision seems misguided. Linda, her antagonist, still gives lip service to the ideal, but she is a character driven by the bitterest need for revenge, and her desire for E2 seems petulant rather than principled.

The Terranauts, through the prism of its social and environmental microcosm, considers some of the challenges facing the human race in the next century or so. One of the challenges is human nature, itself. The difficulty in finding consensus or achieving cooperation in the face of dwindling resources. The book is long, so its long gestation and 2016 publication date means it could not have anticipated the unusual human factors introduced into American and world politics by the Trump administration. However, it certainly illustrates the impacts personalities can have on important decisions. The strength of the book is that it dramatizes this human factor in an almost gossipy, personal way. A weakness lies in that it is often hard to relate to any of these characters. Even with a character like Linda, who is so obviously wronged, the characters’ choices and actions are often puzzling or alienating, even when we know where they’re coming from. This is a thought provoking book that offers no easy answers.

1. This review was written before Steve Bannon fell out of favour with Trump, and then everything else that happened in Trump's presidency and beyond. (Return to review)
Widget is loading comments...

Biosphere 2
Biosphere 2 is the inspiration for Boyle's novel. The project had dramas of its own and eventually closed. The dramas in Boyle's novel are fictionalised